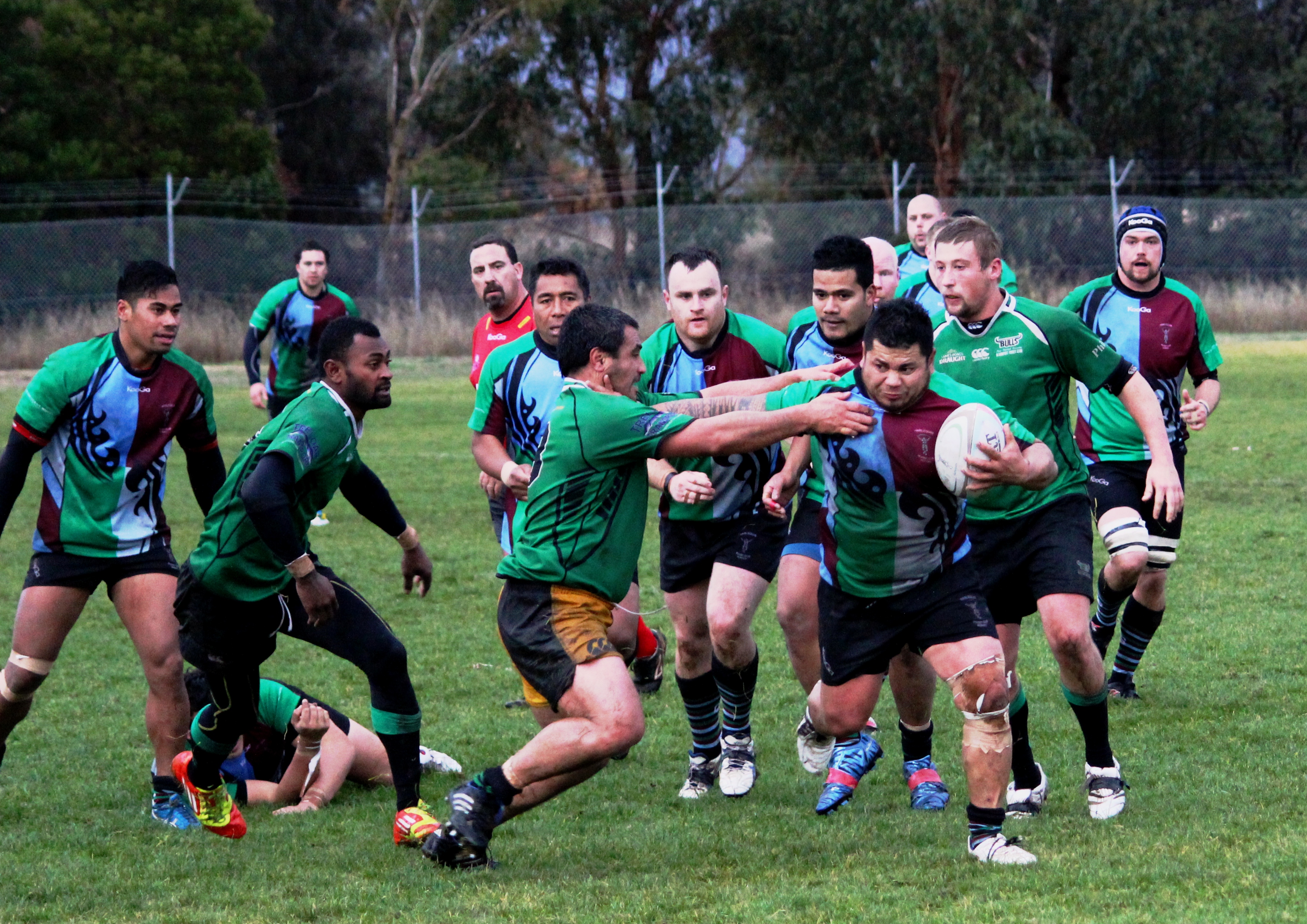 Hobart Harlequins’ centre Sid Fielea sealed his team’s competition lead by running in an 85 metre try with four minutes on the clock to overcome a courageous Devonport Bulls outfit 24-19 in wet conditions at Rugby Park in Hobart on Saturday. Quins remain undefeated at the halfway mark of the home and away season but both sides were slightly below full strength.

Quins’ flanker Pat Schramm scored two tries, one in each half, bracketing Fielea with lock Jeff Altmann as Harlequins stand-outs, and the pack provided secure set play possession, allowing backs to choose running options, including the final break-out. ‘The scrum and lineout won it for us’, said Quins coach Colin Fielea. ‘We need to work on our impact in the tackle, and our pass timing in the centres was a problem.’

Devonport didn’t die wondering, launching desperate attacks into the elements attempting to seal or win the match and a converted try from Mark Meo had them leading until a tiring defence couldn’t quite contain the flying Fielea. Best for the Bulls were Luke Johnson, Shaun Puke, Bertie Loubser and Dean Wallace in a team whose preparation was hampered, clearly affecting their set-play performance.

On Friday night Eastern Suburbs Roosters boosted their confidence defeating University Red Men 21-3, all points being scored by half time. Uni were hampered by lack of training through exams, but were more convincing up front than the score-line revealed.

Easts’ Jake Hyland scored a brace of tries and they communicated well, none better than Beau Horton whose defensive effort when the Roosters were reduced to 13 men by cards inspired others. Richard Millar and Sam Featherstone shone in the Easts pack. University were well-served by Augie Duplant, Jack Beattie and Mike Kadjiolka with their scrum reminding Easts of work still to be done.

Glenorchy Stags took their opportunities to shade Hobart Lions 20-10 at Eady Street in Glenorchy, a telling 10 minutes after the break yielding two of their three tries. Stags’ flanker Doug Smith scored twice but Glenorchy were guilty of trying dry weather tactics before settling to lead 10-7 at the break. Repeated turnovers from both sides meant much of the play was conducted in neutral territory. Fellow flanker Dylan Oakford and prop Chris Harwood backed Smith for the winners. ‘Glenorchy made most of their territory and converted possession into points’, said Lions coach Adam Johnston, recognising stand-out performances from Terry Richardson, Jon Clack and Roland Lawrence and good set-piece performance from the Lions.

Launceston Bees played to better strength out wide to defeat Burnie Emus 37-10 at windy Royal Park in Launceston, lifting themselves to fourth place. Despite practising penalty avoidance, the Bees conceded too many to be satisfied. Michael Hafaifonua, Jock Hamilton and Gerry Kylea were Launceston’s best. Burnie skipper Brett Bentley combined in support triangle hit-ups through the inside backs with Dayne Apiti and Michael Grace.