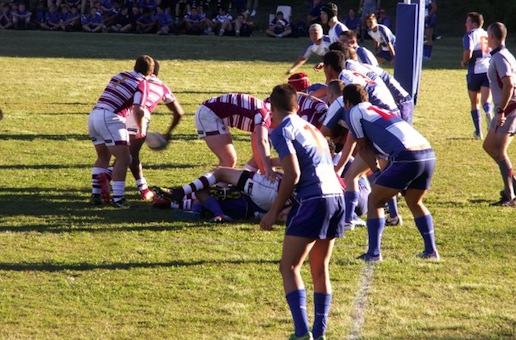 St. Peter’s have severely damaged St Edmunds’ hope of an outright premiership thanks to the golden boot of fullback Adrian Henley.

After a surprising away loss to Villanova last week, Peter’s proved they are more than just a shadow of last years title winning team defeating a much more fancied Eddies, coming off a historic win against Ashgrove.

Eddies opened the scores off an opportunistic quick tap in the Peter’s 22, and centre Jake Turpin was able to sell the dummy to an overstretched defender and dive underneath the posts.

Peter’s then got themselves into Eddies 22 and Henley shot an ominous warning to the home side, attempting a drop goal after some disrupted attack. Points were correctly identified as a valuable commodity by Peter’s and they elected to take 2 shots at goal and a drop goal after getting back into Eddies’ 22, all of which Henley slotted.

Peter’s slowly built up their momentum and some rumbling pick-and-drives from front rowers 3. Hamish Richardson, 2. Shaun Laurie and lock Ollie Hughes set the platform  for winger Luke Di Trapani to cross in the opposite corner.

Peter’s emerged as the dominant attacking side in the second half and off a lineout their dangerous outside backs broke through the line out wide, sending the ball through the hands of Di Trapani and centres Dix and Bennett to find a supporting 9. Moses Sorovi on the inside to score under the posts.

However through desperation Eddies answered Peter’s onslaught and after some constructive running out wide by fullback Clifton Setu, centre Rory Humphreys was able to barge over two defenders and offload to winger Shaye Lund who stretched out and scored.

Eddies continued to pile on the pressure and after another powerful run by Humphreys, phases later 5. Zach Raby identified a chink in Peter’s defensive chain running through a two man tackle to score another.

Peter’s could feel the momentum swaying and Henley attempted to quell Eddies’ resurgence with another successful penalty and drop goal.

But Eddies continued to fight back by speeding up the game and after more destructive running by Humphreys, flanker Brock McNulty popped it up metres from the tryline for a waiting 9. Daniel Turner to dive over.

Eddies continued to throw everything at Peter’s in a desperate attempt to save what could be, but out of their 22 Peter’s spread wide to Bennett who broke the line and through Henley who ran 40 metres a supporting Billy Dix got the ball and beat his man on the outside to score the last try of the game, rewarding himself for a number of good runs and linebreaks throughout the match.

The result leaves Iona as the remaining undefeated team with Eddies and Ashgrove to come in the next 2 rounds whose outcomes will decide whether the premiership is won outright or shared.

Stay tuned for Sam Phillip’s review of the Northside derby game between St. Pat’s and Padua.