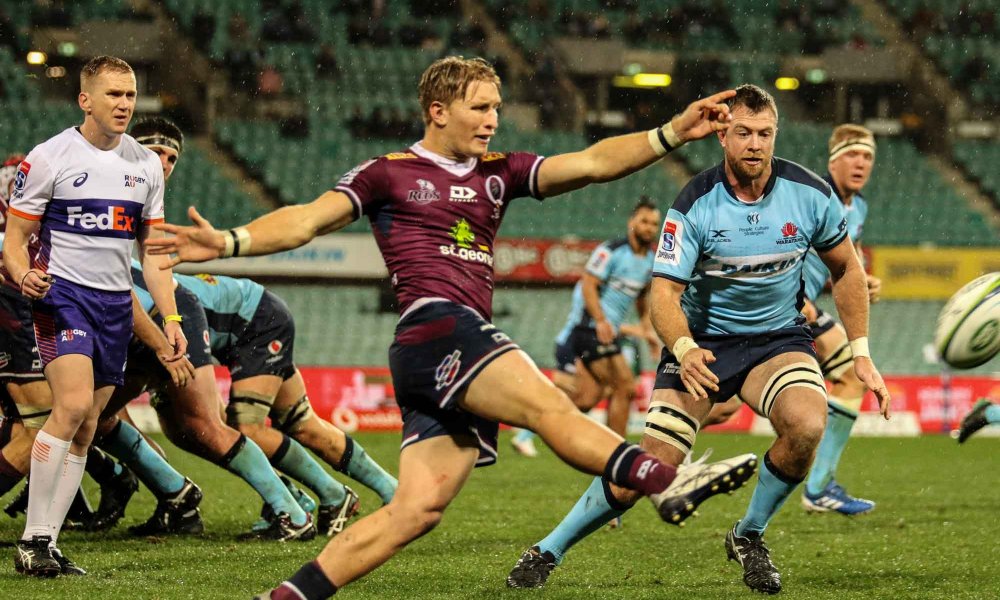 To understand why the All Blacks are so dominant, and why for example the Wallabies have been struggling, we can use the metaphor of a steakhouse. Put simply, the All Black restaurant makes more money because they sell a better quality beef and pair the meal with better wine.

How a generation of rugby players gets developed through the pathway of their career, will ultimately determine the quality of product that the national coach gets to work with, just like some restaurants get to serve a superior product of meat, so that no matter if it’s cooked (coached) the same way, the one will always be just a little bit better.

It makes logical sense that matches are the best way to produce quality players, and coaches often tailor their training sessions to mirror what their games are like. In a game where 500 ‘events’ occur, each player on the park will get to sharpen his or her skills 16.66 times. If 800 events occur, each player will up-skill 26.6 times. Therefore if we want to produce great players at an elite level, our community games need to be more dynamic. 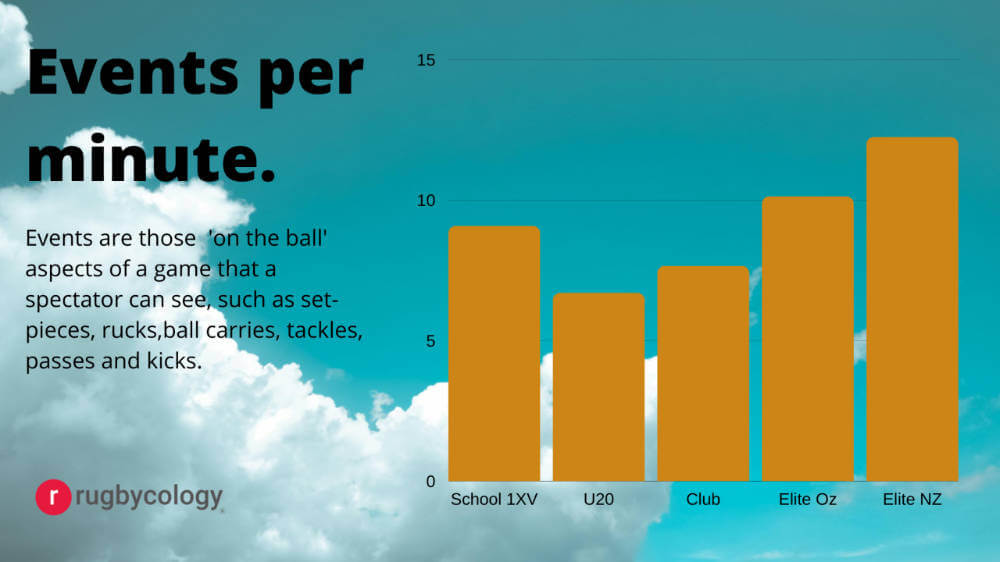 My sample for this study is tiny so far, and focuses purely on community rugby in Brisbane. We are 2 games into the season, so I do not nearly have enough data on my schools and club games to give an honest assessment. However as you can see above, All 4 tiers of the game in Australia is currently a little bit behind the New Zealanders when it comes to how busy our games are.

It is only the start of our season, so the assumption is that our community teams will get a lot sharper and that games will speed up and be less error-ridden. However this is a good place to start benchmarking. 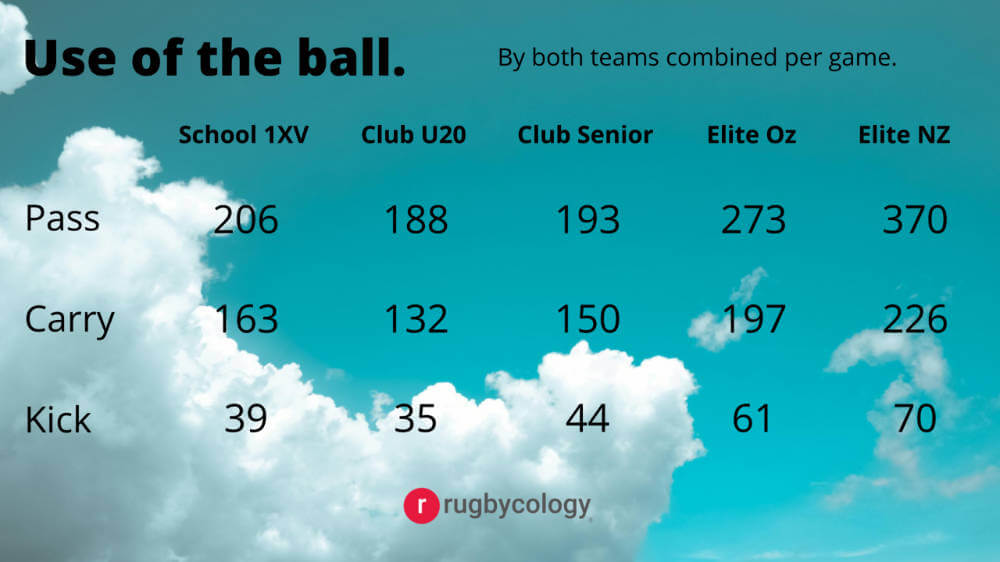 While our elite teams handle the ball far more than any other level of our game, we are still some way off the benchmarks set by Aotearoa. How we play the game at community level feeds into this.

I have been particularly frustrated at how little our school’s teams kicked. Last season i measured an under 14 game in which there were only 12 kicks – all of them to relieve pressure from their own 22. When interviewing coaches at that level I am often told that “we do not like to kick the ball because the boys just want to play.”

There are two problems with this premise: Firstly, kicking is a vital part of attacking rugby, and will in future become even moreso. Not letting young players explore ways of attacking with their feet means they are not developing a crucial skill. 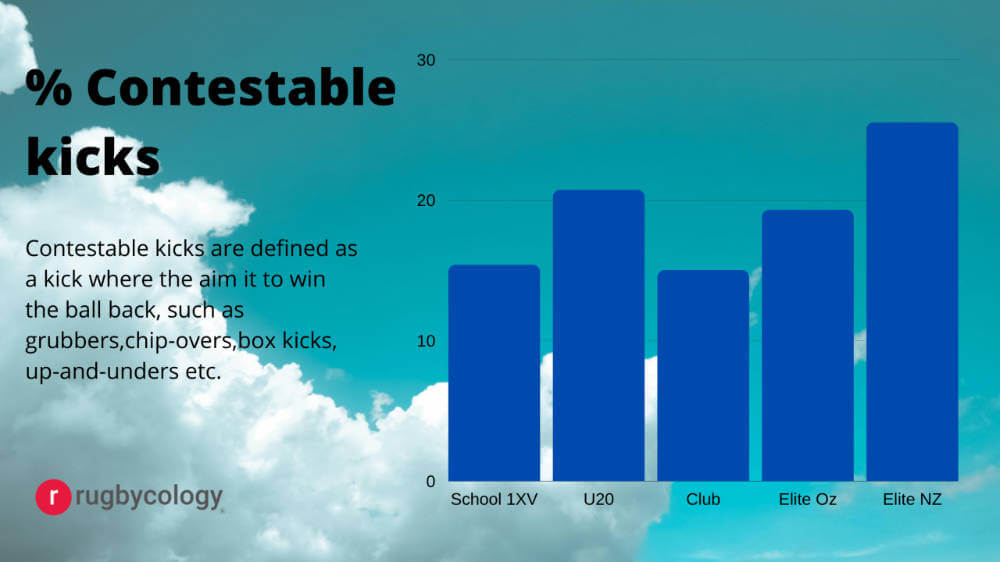 With defences up flat it’s vital that our young players identify the space at the back and that they have the skillset necessary to exploit that space. You only hone this skill by executing it in game situations, so I would love to see our coaches encourage players to have a crack more often.

Have a look when you next attend a school game how often after phase 2 or 3 the entire back-field is left open because players no longer expect the ball to be kicked there. This leads to a congested defensive line, which in turn allows for less line-breaks and overlaps.

Secondly, allowing young kids to ‘just play’, often leads to them merely seeking contact. Each carrier wants time ‘on the ball’ and therefore will not distribute it nearly enough. What we want is to develop well-rounded players who have the skillsets to attack and defend in multiple ways, and the decision-making capability to make the right choice between what weapons to use and when. 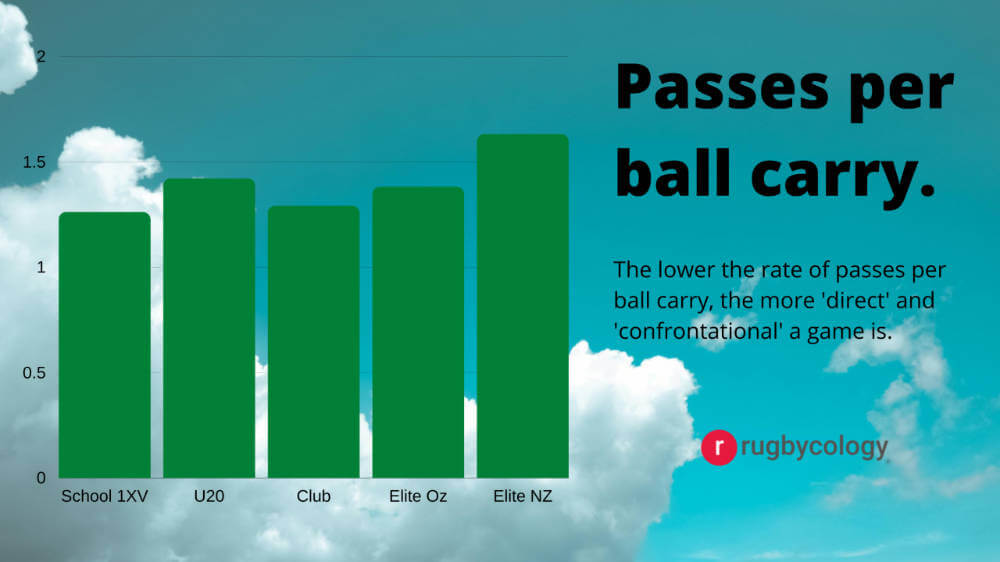 New Zealand elite teams pass the ball on average 100 times more per game than do Australian sides, and the lower down you move in age groups the lower the pass per carry rate tends to become.

We make more mistakes when passing the ball at Super Rugby level, because our players are not incentivised to pass the ball more often at school and club level. At this stage, what I am saying here is merely hypothetical as I will need at least this season’s data to prove or disprove the theory.

However it is my challenge to coaches at schools and club level to get your players to play faster and pass/carry/ kick more often. Doing so not only puts a huge strain on the defence, but it also helps your players develop a wider range of skills at a faster rate. Your players will enjoy the game more because they are more involved. Your scoreboard will improve because you play with more dynamism and in doing so create more scoring chances. Finally, you will be sending better meat for the Dave Rennie’s of the world to work with one day.

This report is part of  an ongoing study in Queensland for the duration of the 2020 season. If you are interested in getting your school or club involved, please get it touch: