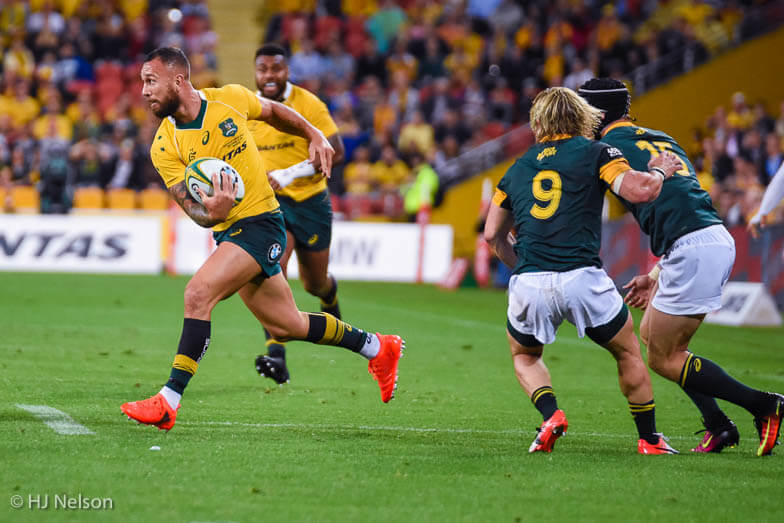 Wednesday’s Rugby News sees Cooper and Rodda return from the wilderness, the Welsh study into rugby brain injury, the Seppos learning rugby via reality television and Rassie not touring to Australia.

GAGR’s own Nathan “True Blue” Williamson reports that Queensland refugees Quade Cooper and Izack Rodda could play on Sunday in the third Bledisloe Cup Test in Perth, after centre Hunter Paisami and second-rower Lukhan Salakaia-Loto both left camp to be with their expecting partners.

70-Test Cooper has not played for Australia in four years and will soon depart for another season in Japan.

25-Test Rodda will play for the Western Force next season after returning from a one-year stint in France. Rodda last represented Australia at the 2019 World Cup.

Cooper played down the prospect of another Test cap despite coach Dave Rennie admitting the 33-year-old had pushed his way into the mix.

Rodda admitted the likely return had come quicker than expected but says he will come armed with an improved physicality at the breakdown and with ball in hand – areas he viewed as a former weakness – after a challenging season with Lyon.

Nathan also reports on Cooper’s developing love for teaching others.

“At Super Rugby and Test level, I would get frustrated when someone didn’t understand their role or missed a jump on a play, forget a little bit of knowledge because, to me, you should automatically know that at that level. I think that was an error in judgement on my behalf instead of putting in the time and effort to help other people because everyone learns in different ways.”

“When I went to Souths, a club that doesn’t have resources or money so the coaching and players, talented players but very raw. For myself, being fortunate to have great coaching and resources from such a young age, I was able to find patience in myself and in the things I had learnt.”

As reported by The Guardian and early-notified by GAGR’s Wales correspondent Eloise Pasteur, The University of South Wales have found that a professional rugby squad suffered a decline in cognitive function after one season.

The research suggests that repetitive contact events, rather than only concussions, incurred through rugby caused the declines seen in the players.

Researchers followed a professional team playing in the United Rugby Championship over the course of a season, testing the players pre-season, mid-season and post-season.

The peer-reviewed study found that over the season the squad experienced reduced blood flow to the brain and cognitive function – the ability to reason, remember, formulate ideas, perform mental gymnastics and remember.

The study also found a correlation between an increase in contact amount, playing position and rate of decline on the main measures tested. In forwards, who are involved in more contact, a greater degree of impairment was noticed, relative to backs, who do stuff-all except looking after their haircuts.

Americans have long claimed to have the best athletes in the world, generating a surplus of those who fail to reach the heights of the NFL, NBA or major league Gator Wrasslin’. The Colorado XOs (cross-overs) rugby squad has been created to try and turn some of those athletes into rugby players according to ESPN.

RugbyTown is the name of a 10-part documentary series that charts the journey of the XOs.

“The idea was to create a brand new rugby team of superior athletes from a new stock of athletic talent that will fundamentally change the way that America can compete in rugby going forward,” says RugbyTown documentary creator Patrick Guthrie modestly. “To create the foundation of players, a pathway and a program, that can create 50 or 60 players by 2027 to win the World Cup.”

“Act 3 for every episode is always the game and the game is told again by the players and their voices…what we wanted to do is not create a show about rugby, as we figured if we really want rugby to break through in America the show really can’t be about rugby at all. What it has to be about is interesting characters and that’s where I really think we’ve hit the goldmine of RugbyTown season 1.”

Not about rugby? The show would want to be unintentionally hilarious.

Sky Sports reports that under-fire Director of Rugby and waterboy Rassie Erasmus will not travel with Springboks to Australia for Rugby Championship, as confirmed by Springboks head coach Jacques Nienaber. Erasmus is preparing to face a World Rugby hearing into his conduct during the Lions tour this summer, presumably with a video of his thoughts on the hearing to follow.

Erasmus is preparing to face a World Rugby hearing and has been hit with various charges from World Rugby after the now infamous 62-minute video he created as a critique of Australian referee Nic Berry’s performance in the first Test loss to the British & Irish Lions in Cape Town last month.

It drew a furious response from Rugby Australia, who called the video “unacceptable and against the spirit and values of the game.” Hear hear.

Erasmus could be hit with a number of sanctions by World Rugby if found guilty of bringing the game into disrepute, ranging from a fine to a stadium ban or even a complete suspension from the game. The latter two sound like a fun challenge to an accomplished fine-print literalist.

The first Springbok game in Australia will be the second game of the double-header (after NZ v Arg) on Sunday Sept 12 at the Gold Coast instead of somewhere classy.