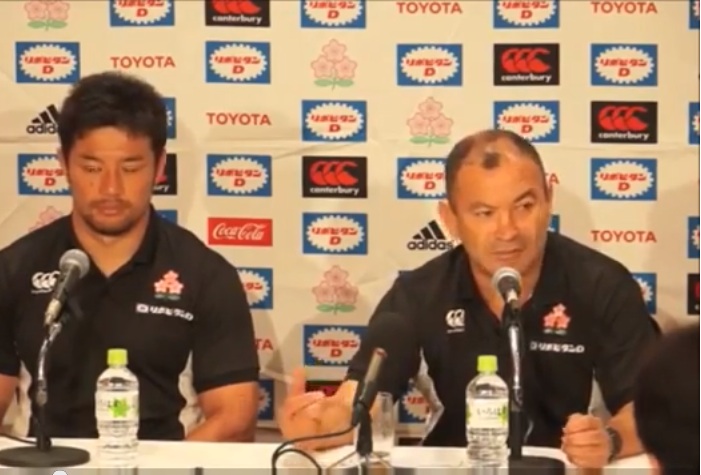 The RFU have released a statement confirming that lovable larrikin Eddie Jones will get to enjoy some more family time. “Following a review of the autumn, Eddie Jones has been dismissed from the position of England Men’s Head Coach. The Rugby Football Union (RFU) will now conclude the long-term work it has been undertaking on coach succession planning with changes set to be announced in the near future. In the interim, Richard Cockerill will take over the day to day running of the men’s performance team.”

“It is important to recognise the huge contribution Eddie has made to English rugby, winning three Six Nations Championships, one Grand Slam and taking us to a Rugby World Cup Final,” said RFU CEO, Bill Sweeney. “He has the highest win ratio of any previous England head coach and has helped develop the leadership skills of many players and coaches. I am grateful to Eddie for all he has done for England across many areas of the game and the professional way in which he has approached reviewing the performance of the team. He has provided the panel with astute insight and meaningful lessons that will support the team performance going forward. I am pleased with much that we have achieved as an England team and I look forward to watching the team’s performance in the future,” said Jones. “Many of the players and I will no doubt keep in touch and I wish them all well in their future careers.”

Nine speculates that Jones will receive a payout of more than $1 million, with a termination agreement being worked out. According to Georgina Robinson at the SMH Leicester Tigers coach Steve Borthwick is tipped to take over, nine months before the World Cup in France.

PlanetRugby reports that, despite being appointed as Wales’ new head coach on Monday, Warren Gatland has revealed that he still has ambitions of coaching the All Blacks one day and endorsed Scott Robertson as the next man for that position.

Current All Blacks head coach Ian Foster is contracted until the end of next year’s RWC in France, which puts Robertson in a tricky situation as he’s indicated that he’d like to coach at international level, with the New Zealand job being his preferred role.

Although he didn’t say whether the All Blacks should have a new coach in 2024, at a press conference in Hamilton Gatland hammered home his point that Robertson’s claims could not be ignored. Hamish Bidwell at Rugbypass speculates that Robertson “clearly has enemies in high places” as an explanation for the ongoing non-committal answers about his future from NZR. Bidwell goes on to lament: “We (NZ) insist that coaches – such as Robertson must have some offshore experience – despite Ian Foster having none. Conveniently, when our coaches do do well elsewhere, we diminish the currency of those overseas results and suggest these men suddenly don’t have the familiarity with the New Zealand game and are out of touch. We will now happily send Robertson packing for fear of doing anything to undermine Foster.”

Georgina Robinson at the SMH writes that if the All Blacks don’t pick up Razor as Ian Foster’s replacement, he is the Wallabies to land, and a two decade old friendship with Rugby Australia powerbroker Daniel Herbert could help seal the deal. “A British & Irish Lions tour in 2025 and home World Cup in 2027 would be big draw cards for any coach. RA also punches above its weight in the remuneration stakes. It would beggar belief if McLennan or Marinos didn’t try to meet Robertson over a beverage while the three of them were in Europe last month.”

According to PlanetRugby, Springboks and Bulls flyer Sbu Nkosi has opened up about his recent disappearance, saying he was battling mental health issues due to pressure from playing rugby at an elite level. The Bulls found the 26 year old at his father’s house in Emalahleni, Mpumalanga, after he hadn’t been seen for three weeks, during which time the Pretoria-based franchise reported him as missing to the South African Police Service.

Bulls chief executive Edgar Rathbone located Nkosi‘s whereabouts after receiving tip-offs and assistance from a security company, who are one of the team’s sponsors. The player was in a good physical condition and is confident he’s on the right track to regaining full fitness.

“It’s just been a whole lot of mental pressure. It’s been building up for a couple of years now, since the Sharks saga, and it’s been a bit of a tough time.” Nkosi told News24. Nkosi previously played for the Shorks between 2017 and 2022 before joining the Bulls in May but also had disciplinary issues at the Durban-based outfit. “I was just trying to keep myself calm. That’s been a battle,” he added. “There’s too much to go into: the expectations, the fact that by choosing to take care of myself right now, there are people I’m letting down, and that also hurts me.”

Bulls chief executive Edgar Rathbone admitted to being relieved to find Nkosi alive and physically well but said he is “heartsore” that the 2019 Rugby World Cup winner was in a bad mental health state. “It’s clear he wants a break from rugby, and the Bulls will grant him that. I told Sbu and his father that, wherever we can help him throughout this process, that’s the reason we went to Emalahleni.”

World Rugby is poised to dramatically restructure its World Rugby Sevens Series with 12 men’s and 12 women’s teams to play in seven destinations around the planet from December next year. Those destinations will not include New Zealand according to stuff.co.nz.

Sevens legend Eric Rush said “I would love to get it back here someday. But maybe we were our own worst enemies by not supporting our tournament well enough.” NZ Rugby says it tried to convince World Rugby to keep New Zealand on the fuxture lust, but it was to no avail; Chris Lendrum, GM Professional Rugby & Performance, said NZ Rugby was “gutted” to be overlooked. Dwindling crowd numbers in Wellington led to Hamilton being rewarded with the hosting rights in 2018. The near-empty stadium in Wellington in the latter years was a far cry from the early 2000s, when it heaved with around 34,000 fans who cheered on their team.