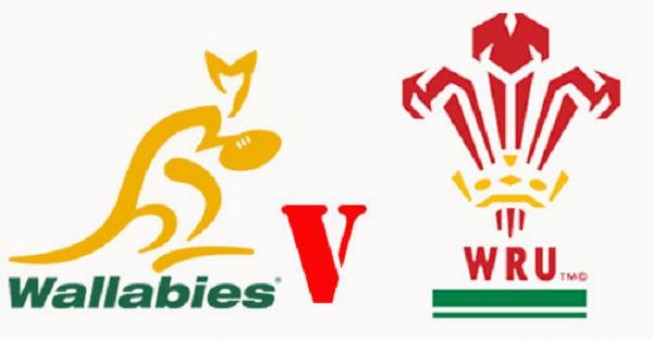 I think the eight match in a row wallaby winning streak over Wales counts for nothing. If they win this most would call the spring tour a success. If they lose there will be a few doubters. The Welsh are brimming with confidence after a good six nations tournament and a successful lions tour.

Australia had the worst possibly start. After a promising beginning where Quade Cooper put Israel Folau through the Welsh defence, a turnover at the next ruck allowed Wales to put George north away down the left touchline and he raced away and chipped through to score in the corner after Australia failed to clean up.

After trading penalties the Wallabies hit back with their own sensational try off a turnover. Hooper made the steal and Will Genia moved the ball quickly. Cooper chimed into the backline, drew two players and flicked-passed to Tomane who got in behind the defence and passed inside to Christian Leali’ifano to score.

The Australians were still having discipline problems however. They were leaking penalties at a steady rate which allowed Wales kick after kick at goal. Thirty minutes in Wales led 16-10

Despite the penalties the Wallabies looked to be unlocking the Welsh defence. In the last ten minutes of the half the Wallabies created four try scoring opportunities. They only managed to convert one, but that was enough to give them a one point halftime lead and give Israel Folau his tenth try of his debut season.

The Wallabies started the second half the same way they ended the first. The Welsh side seemed to have trouble keeping up with the pace of the game. Australia scored their third try after sustained pressure on the Welsh; the Wallabies created an overlapp on the right and Folau drew two players and passed low to Tomane who picked up cleanly to score.

Just when Wales looked down and out they picked themselves up and scored a try of their own. George North’s huge right foot step put him in under the posts to bring the score back to 23-30

With eight minutes to go the game had evened out. Wales had kicked a penalty to bring the score back to 26-30.

I’ve just held my breath for eight minutes!  As I was typing Quade Cooper was sin binned for tackling a player without the ball. A harsh decision in anyone’s books as the ball and the tackle appeared to arrive at nearly the same time. Regardless, Australia finished the game with fourteen players. Wales turned down the kick at goal and went for a ten-man lineout instead. Australia disrupted their ball and the Welsh had a ruck instead of the maul they had hoped for.

The Wallabies defence didn’t looked troubled and eventually won a turnover, they then controlled the ball and worked their way up field. With twelve seconds to go Wales won a penalty and ran the ball from deep in their own half. With time up on the clock they kicked the ball through, George North recovered it beautifully but just stepped into touch.

The wallabies had won their fourth game in a row and four from five on the spring tour.

Dan Biggar was yellow carded  just before half time. The Australians lifted and scored while he was off – Wales never recovered. Quade Cooper’s yellow card could have had the same effect but the Wallabies held it together to finish the game.

Stephen Moore and Quade Cooper get honourable mentions but my MOTM is Scott Fardy. I just love what he has done for Australia at blindside flanker and he had a huge influence on this game as he has in every game he has played their this year.

Will Genia improved once again. Joe Tomane had a good match as did Stephen Moore, Quade Cooper and Israel Folau. James Horwill continued to improve and Ben Mowen defended well despite leaking penalties.