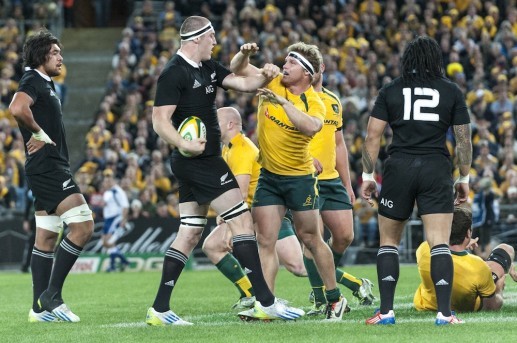 Tuesday’s top rugby news has Hooper staying in blue, the Pumas promising more fight, the Wallabies slipping in the IRB rankings and a notable Sharks signing

Star flanker Micheal Hooper has re-committed to the Waratahs and the Wallabies until 2016. The 21-year-old has already achieved 17 Wallabies caps and has become a team standout, initially filling in for the injured David Pocock. ‘To have clarity over what I’ll be doing the next couple of years is great and I’m stoked to be staying in Australia and playing with the Waratahs,’ Hooper said.

Despite Saturday’s disappointing loss, Hooper was also optimistic about the team’s potential, forecasting a victory in the second Bledisloe encounter. While the Wallabies were thoroughly outclassed at the breakdown, the No. 7 saw that the Australian pack has the ability to dominate the All Blacks. ‘We have a good mobile pack and I feel like we can exploit that and really get over the gain line,’ Hooper said.

The Pumas have promised a different second Test match, with Captain Felipe Contepomi emphasizing the home field advantage in this weekend’s match. The Argentinians were thoroughly outclassed by the Springboks in a 73-13 drubbing during the first match. ‘For us every match is a learning curve, today was very tough to swallow and I hope we can swing it for next week,’ Contepomi added.

The confident Springboks have shot down this sliver of hope, with number eight Duane Vermeulen asserting that the team has a number of areas which will be worked on and improved before their second Test.  The huge backrower was seemingly looking past the Pumas as he said, ‘We can still improve a lot, even though we set a standard (on Saturday). Big and strong opponents await us.’

As if the 47-29 Bledisloe opener loss wasn’t demoralising enough, the IRB has deemed the result worthy of pushing the Wallabies from their top three ranking. This has allowed the English to break the southern hemisphere dominance at the top of the rankings, pushing Australia to fourth.  With their comprehensive wins, New Zealand remain first, with South Africa closing the gap in second place.

The Wallabies will be looking for some better news as Aaron Cruden and Beauden Barrett both undergo scans this morning to determine their availability for the second Test. Despite the prospect of starting fourth-choice five-eighth Colin Slade, Kieran Read is confident in the team’s depth, saying, ‘The two guys that are here, if needed, I think are capable of stepping up. It doesn’t change too much.’

Springbok prop Lourens Adriaanse has signed a two-year deal with the Sharks. Adriaanse is currently in Argentina ahead of the Rugby Championship second Test, and will officially join the Sharks for 2014 pre-season training in November.

Confirming the signing, Sharks Commercial Manager Rudolf Straeuli said the team weren impressed with Adriaanse’s performances for both the Cheetahs in Super Rugby and Griquas in the Currie Cup competition. ‘He has a good workrate around the park and will add depth to our tight five,’ Straeuli said. Sharks CEO and South African front-row legend, John Smit, also added, ‘Lourens has displayed his immense potential and value as a tighthead prop and is a good addition to our squad.’