Eastern Suburbs Roosters produced decade-best performance in subduing Hobart Lions 36-22 at Rugby Park in Hobart, confirming the promise of a revival that has built throughout the season. 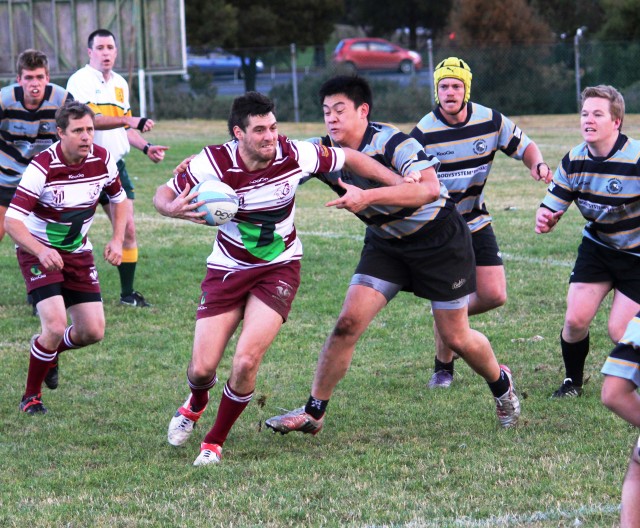 ‘We trained hard this week and to our credit the players climbed a mountain today’, said Easts mentor Brett Bourke, observing his side dominated for all but the first and last 10-minute periods of the second half. ‘We contested well at the breakdown and continued to play our game.’

‘They wanted it more than we did’, admitted Hobart’s Derik Clack as the 22-3 half-time margin reflected a lack of possession, despite the Lions taking the second period’ Sallih, Mark Playle and Jon Clack featured strongly for the Lions.

Taroona Penguins took 35 minutes to settle against University before easing to a 40-5 winning margin. Sam Lowe, 100-gamer Andrew Wicks and Charlie Holmes stood out for the Penguins and veteran back Chris Noble showed class in a return to the top grade. University lost skipper Brady Gower early, followed by secure scrum-half Matt Tehau later, but were well served by Jack Beattie and Brad Doran.

Glenorchy Stags staged an unheralded return to the four with a 50-15 defeat of Burnie Emus at Eady Street in Glenorchy, despite a threadbare 16-man squad. Josh Dorahy, Dan Aualiitia and Bryan Watt were industrious for the Stags whose discipline and defence improved in the second half to run in five of their 8 tries. ‘Our forwards played very well, and we could get a couple back next week’, said Stags coach Shannan Banks. Burnie’s best were Hamish Howe, Rhys Weber and Jack Colburne but their set pieces failed to match a courageous performance in the loose.

Second-placed Hobart Harlequins had to resort to running a penalty after the bell to outscore Launceston Bees 24-20 in a heart-stopper at Royal Park in Launceston, the lead being exchanged several times. The final play saw Quins player of the match Fale Atileo skilfully position Sunia Ma’afu and preserved Harlequins undefeated status. Luke Brooks and Jeff Altmann provided plenty of forward grunt for Quins. Although disappointed at the Bees being outlasted coach Ray Burgess said’ It was a physical game played in good spirit, but our discipline cost us.’ Harley Lyons, Colin Montgomery and Michael Hafaifonua played strongly for Launceston.

Shute Shield Round 9 Review: Students move to third with win over Wicks
Queensland Premier Rugby Round 9