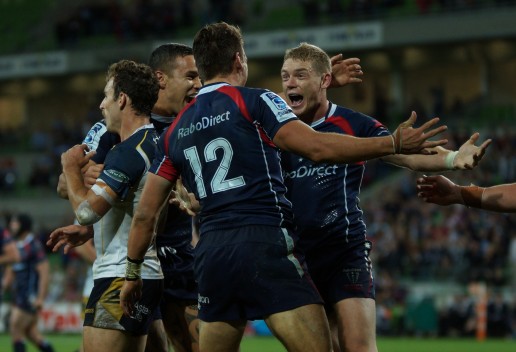 The Melbourne Rebels overcame their own worst instincts to register a vital 32-24 upset win against the Brumbies at AAMI Park Friday.

The home side had been making a lot of noise in the week leading up to the match that this match would decide their season, one that had faltered through four consecutive losses. The Brumbies were, conversely, going for their fifth-straight win, and points against the Rebels would cement them at the top of the Australian conference.

The Rebels attempted to make a statement in the opening play, opting to take on the Brumbies’ scrum at a penalty. The decision backfired, with the Brumbies’ pack dominant, taking the feed and then the scrum off the hosts. Toomua sent the ball wide to a freewheeling Jesse Mogg, who cruised over the line to open the scoring. Nic White converted for a 7-0 lead after 2.

Tevita Kuridrani gave away a penalty for offside, allowing Jason Woodward a shot at the posts. He was successful, taking the score to 7-3 after 6.

The Rebels were struggling to have any impact on the contest, the Brumbies’ pressure and the subsequent disposal of possession through kicking saw them on the wrong side of their own crowd at the Stockade. Hugh Pyle conceded a penalty for being in front of the kicker and the Brumbies opted for the posts, White extending the lead to 10-3 after 11. 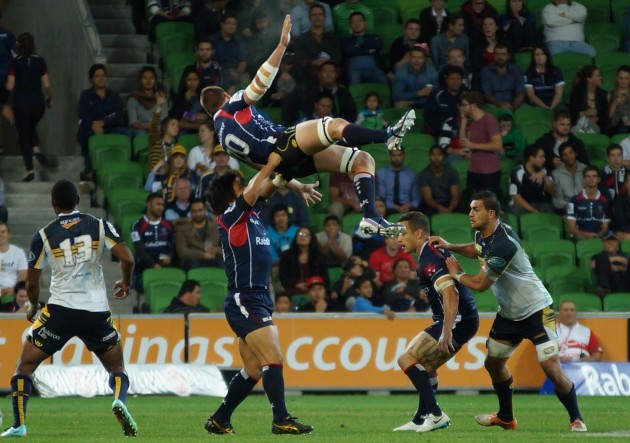 While the first 20 minutes were characterised by the Rebels’ shocking decisions with possession, the last 20 minutes of the opening half would be remembered for the Brumbies’ inability to capitalise on them. As the Rebels slowly consolidated and looked to stop the drain, the Brumbies gladly obliged, the attacking flair that saw them score in the opening minutes of the game seemingly dried up.

Twenty minutes passed on the clock with no addition to the score, then thirty. Scott Higginbotham had sensed the change in the air, and was relying on his forward pack to carry the ball and build pressure. Both teams were feeling the effects, with Scott Fuglistaller leaving the field momentarily for a concussion test, and JP Smith leaving the realm of conscious thought momentarily after copping a huge hit late in the first half.

The Rebels were seemingly about to receive their reward for the shift in the game, receiving a penalty on the buzzer after a long series of phases. The Rebels kicked for the line to try and push the ball over, but were halted when Jaco Peyper gestured towards the rooms. It may have been right for the referee to suggest the players ask him if they could still kick for touch and play it before they did, but logic did not quench the anger of the crowd, who ushered the referee off with a round of boos. 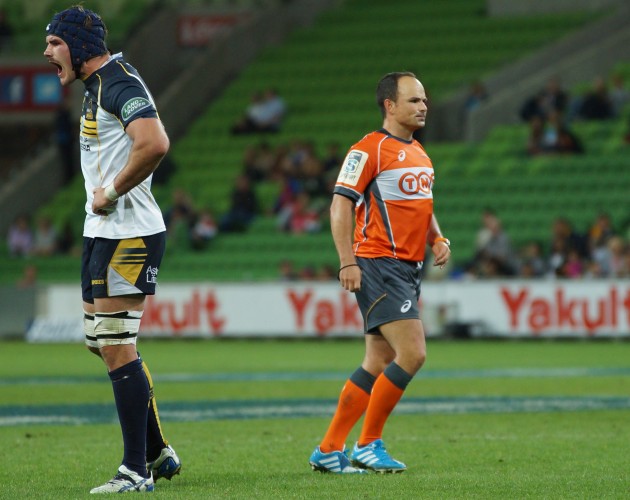 The second half commenced and the impetus was still with the Rebels. The forward pressure had vastly improved, and they were rewarded when Jarrad Butler was caught loitering at the ruck. Jason Woodward cut loose from near half-way and nailed it, reducing the margin to four, 10-6 after 45.

The Brumbies perhaps sensed the shift in the game, and kicked off their first real attacking run since the opening minutes. They packed an attacking scrum in their final 5m, and looked to have done enough to score, when Nic Stirzaker dived on the ball to reclaim it for the Rebels. Jaco Peyper, however, had other idea, adjudicating that the ball had not left the scrum, and awarding the Brumbies a penalty try. White converted and the Brumbies had their scoreboard dominance back, 17-6 after 47.

Jason Woodward would prove the spark for what was to come. He was electric in open play and deadly in front of goal. The Brumbies, however, were losing their structure at the breakdown, all too happy to give the Rebel full-back opportunities to add to his tally. The Brumbies conceded penalties at the breakdown in the 50th and 55th minutes, both times Woodward raised the flags, and the score was pegged back to 17-12.

The Rebels had the ascendancy, and again, it would be Jason Woodward who benefited. After 11 phases on the right-hand side of the ground, Male Sa’u broke and switched to the left, where a bouncing ball landed in the arms of Woodward, who shimmied through five Brumbies defenders to score the Rebels’ first try of the night. He converted his own work, and, incredibly, the Rebels led, 19-17 on the hour. 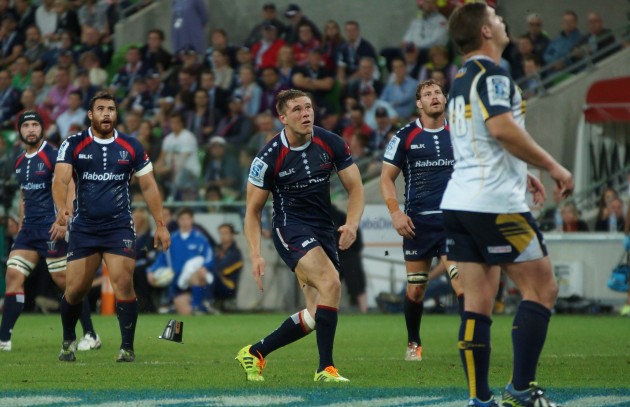 The crowd had been back onside for a half now, content that their advice had been acknowledged by these ball-running Rebels, and they nearly blew the roof off when Tom English made a massive break from the restart and dived for the line. Peyper sent it upstairs, and the look on English’s face was heartbreaking when the replay showed he clearly fumbled as he touched the ball down.

The match turned for good, though, when the Brumbies were forced to 14 men when Scott Fardy fell foul of the referee for repeated infringements, given 10 minutes off. Woodward converted the resulting penalty and extended the Rebels’ lead, 22-17 after 65.

While Woodward was doubtless the starter for the resurgent Rebels, it would be Mitch Inman who put the full stop on proceedings, teaming up with his pair in Tamati Ellison to push the ball forward and left, and finding a massive gap in the Brumbies’ line to go over without a hand on him. Woodward again converted to push the lead to 29-17 with ten minutes remaining.

The Brumbies would have one last crack at the win many thought owed to them, when Robbie Coleman ran after a chip kick and put it down over the line. Matt Toomua quickly dropped the ball over the crossbar to reduce the Rebels lead to five, 29-24 with three minutes to go.

It would prove fruitless, however, when former Brumby Colby Fainga’a trapped Coleman with the ball at the restart, forcing a penalty. Jason Woodward stepped up and continued his perfect night, attaining the Rebels’ scoring record with a 27-point display in a 32-24 win.

Jason Woodward’s try marked the beginning of the Rebel resurgence, and lifted the team beyond the Brumbies in a rampant second-half display.

Jason Woodward was electric, one try, two conversions and six penalties at 100% saw him earn the Melbourne Rebels’ record for points in a game, as well as the game’s four points.

Jason Woodward. Seriously, we need to lock him in before the Kiwis do. Tom English and Luke Jones were also pivotal in the second half and showed excellent form, while Nic White‘s kicking game in the opening half was sublime.