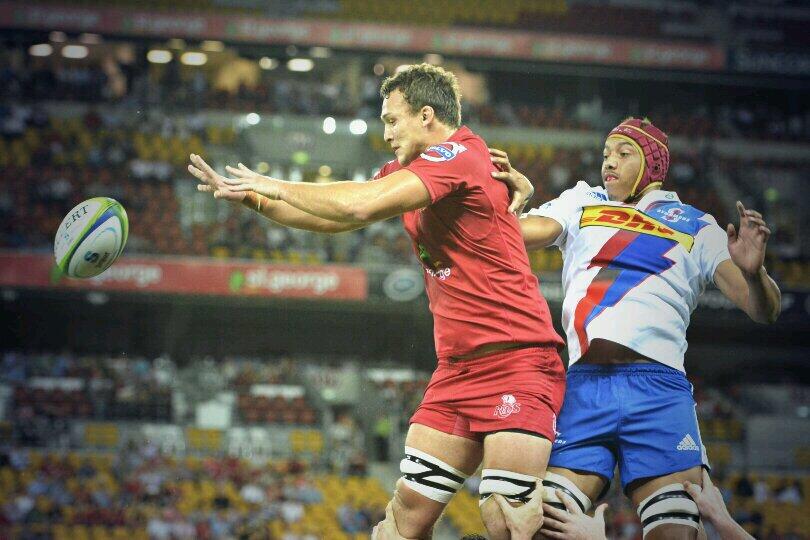 The Reds were back at Suncorp smarting from ending their African tour winless. Waiting for them were the Stormers.

All Photos by Keith Mcinnes Photography

The teams traded blows for the first ten minutes, all the while the Reds struggled to go forward. The Stormers, making more from their probes, eventually made it look all to easy to open the Reds defence as pure numbers saw winger Damian De Allende go over for the first try of the match. Peter Grant had no issues adding the extras. 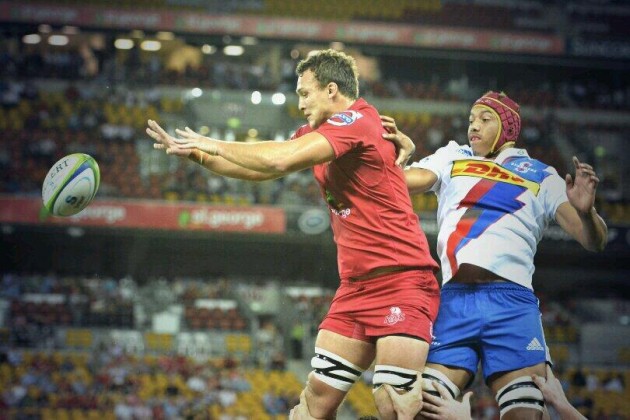 The Teams traded penalty attempts with only Quade Cooper successful in his attempt making the score 7-3 in favour of the visitors.

An attacking raid by the Stormers 20 ended when Gio Aplon fell awkwardly in a tackle, dislocating his elbow on the way down.

The Reds seemed to come alive and looked far more dangerous. The new intent was paying dividends as they worked the Stormers line after a 5m line out. Rob Simmons was the benefactor, rumbling his way over the line right under the posts, making the Cooper’s conversion a sure thing.

The Stormers appeared to be frustrated, their discipline slipping and a couple of penalties began to creep into their game. Cooper took two shots at goal, missing the first before slotting the second. A square up penalty was awarded to the Stormers, which was successful, shortly after with James Hanson penalised for trundling around centre field. A ridiculous call given it had absolutely no impact at all on the game. Sure it’s the law, but it just seems a waste of time.

The teams went into the sheds with the score 13-10 to the home team.

Both teams came out from the break looking to have a run, the tempo and intent seemed better from the start. No points were coming from it but it was entertaining to watch. Despite that, it took until the 18th minute of the half before any points were added, a penalty to the Reds was kicked by Cooper. 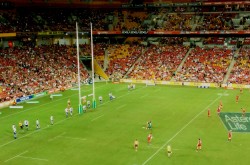 A cheeky drop goal from Cooper kept the scoreboard ticking, quite a smart move given the starch in the Stormers defence and the scarcity of points on offer. With ten minutes to go, a penalty kicked by Cooper stretched the lead to 22-10.

The Stormers were quick to hit back, a 5 metre lineout was pulled down and a penalty awarded, they backed the plan and went the lineout again. This time they formed the maul and easily drove over with back rower Sikhumbuzo Notshe putting the ball down. replacement flyhalf Demetri Catrakilis converted the try making the score 22-17 with 7 minutes of play to go, plenty of time for them to get the game.

From there it was a matter of the Reds closing the game out, and try as they might the Stormers couldn’t get any more points, Will Genia eventually putting the ball dead after the hooter to ensure the Reds added another mark to the winners column and put their African tour behind them.

Quade’s boot was the key change here, constantly keeping the scoreboard ticking over.

Beau Robinson made the most of his start, keeping himself busy all night. He was involved all over the park, it was good to see him out there.

Mike Harris looked spritely in the first half, though I’m thinking Rob Simmons did the most for his Wallaby chances in this game, getting through a mountain of work, without giving away too much in the penalty department.