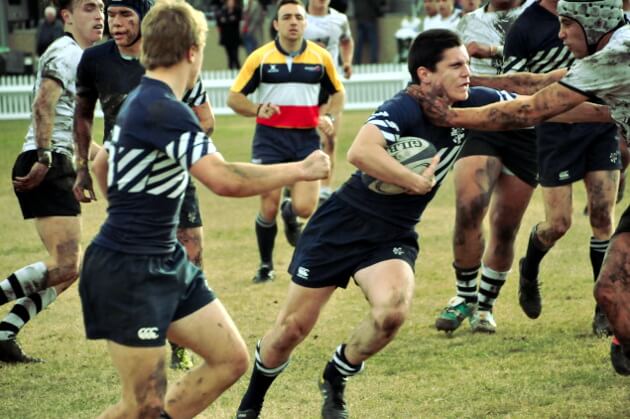 Rugby returned to Northbridge on a perfect April afternoon and by 3:15 the Hawker Stand was packed with supporters from both schools keen to see their sides’ first hit-out of the year. Waverly would start as deserving favourites having put 60 on Shore in the same fixture last year and boasting an impressive roster of returning representative players. Shore, however, would take confidence from wins in the 3rds and 2nds and with a rejuvenated rugby programme keen eyed Shore supporters went into the fixture quietly confident the margin would not be quite so large as it had been at Death Valley the year before.

The deceptively warm autumn day would test the conditioning of both sides early in the season and threatened to subdue the sale of the much-vaunted pies at Northbridge. Shore’s new groundsman, formerly the custodian of the immaculate White Oval at Kings, looked to have done a sterling job with Northbridge A with the playing surface the best it has looked in years. The new policy of keeping the boys off the ground during the week may well prevent the annual emergence of the quagmire in the middle of the field.

Despite Shore controlling possession and territory early in the game, spending a good period camped in the Waverly 22, it was Waverly who would come away with the first try of the match. 2017 Australian Barbarians player Luca Moretti pounced on a loose ball in the midfield, chipping it ahead for his team to chase. With the Shore fullback under immense pressure Waverly managed to snaffle the pill and went over.

From the restart, Waverly looked dominant at the breakdown with a considerable size advantage in the forwards. After a series of strong carries, Waverly prop Harley McGuiggan burst through offloading to fullback Luca Martin to dot it down for Waverly’s second.

A mistake from the kick-off, however, allowed Shore to strike back immediately with Shore’s inside centre Digby Cooke crossing in the corner. But it wasn’t long after that Waverly would hit back with their third try. Shore’s defence around the ruck was exposed by a series of short balls from halfback Reece Thorn allowing the hard-running hooker Keiren Donohoe and prop Aisea Aholelei to make easy metres eventually seeing Waverly Captain Conor Molloy go over.

Pressure from Waverly in Shore’s 22 forced a charge down of an attempted clearance resulting in a scrum five out from the Shore line to Waverly. From there Moretti would cross for a relatively easy try notching up Waverly’s fourth of the match.

A dominant first half for Waverly saw them up 26-5 at the break and in a blow for Shore returning number 8 Dan Williams, who had been looking good, went off injured just before the whistle blew to signal the end of the half.

Waverly continued their dominance at the start of the second half pressuring Shore’s line before outside centre Levi Milford crashed over in the corner. The conversion was unsuccessful leaving the score at 31-5 just after halftime.

Just as it looked like it could start to get ugly for Shore, the men from North Sydney turned it around with winger Alex Fisher scoring courtesy of a break from Shore 10 Dan Jackson from a 22m lineout.

Buoyant from their previous try, Shore made their way up-field again and a well-executed lineout drive saw Shore Captain James Harding go in. Jackson converted to make it 31-19 and for the first time Shore looked to be in the game.

However, any hope that may have been growing amongst the packed Shore crowd was soon quashed by Waverly prop McGuiggan crossing. The successful conversion looked to put the game out of reach for Shore at 38-19. The Waverly reserve prop would then go in before fulltime to put the score at 45-19 capping off a dominant display from Waverly.

15 Luca Martin was a live-wire for Waverly at the back and will be a threat out wide throughout the CAS season. The Waverly pack could all get mentions but hooker Donohoe and prop Aholelei, in particular, looked to be dangerous runners in tight. Harley McGuiggan too made a couple of great breaks and had a try to his name. Moretti, of course, was all class and was deserving of the best on ground.

Blindside flanker Ben Brownie was extremely physical for Shore putting on several big shots against an opposing pack that was not lacking in size. Dan Jackson at 10 also controlled the game well for periods off the back of his strong right boot. Dan Williams at 8 looked to be Shore’s most dominant runner but unfortunately was forced off the field late in the first half due to injury.

Waverly were clearly dominant in the forwards and their strong runners in tight will be a handful this year. Although switching off for a period in the second half they finished strongly to complete a performance that bodes well for the coming season.

Shore struggled to control Waverly’s forward runners and will need to strengthen their defence in tight markedly or will likely face another long season. On a more positive note, unlike last year’s trip to Death Valley they pieced together a solid period of play in the second half that saw them score two tries.