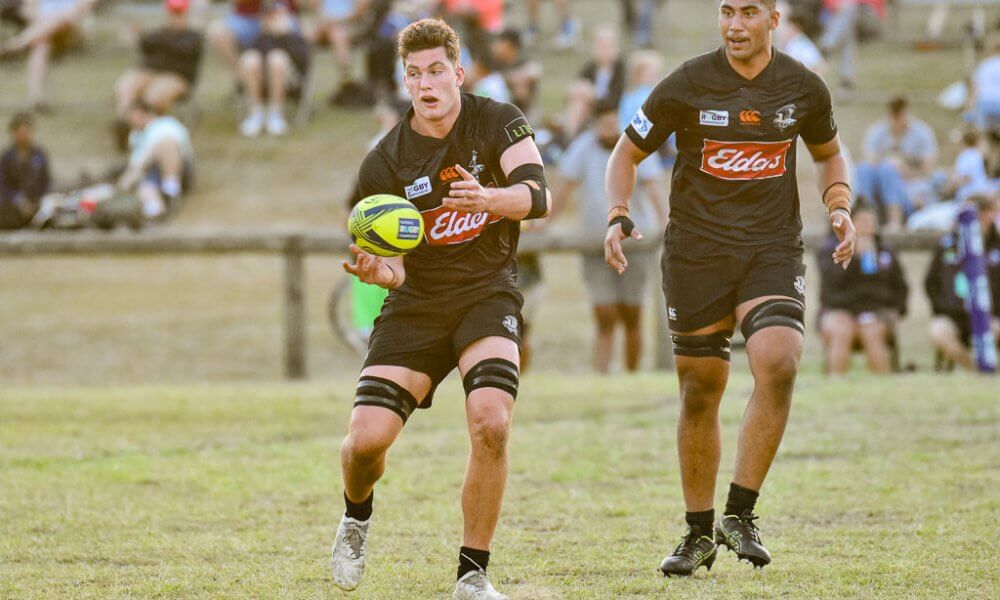 NSW Country Eagles have moved into second spot on the NRC ladder after defeating the Western Force 38 to 24 at Port Macquarie Regional Stadium. The Force were previously undefeated but off the back of a dominant scrum the Eagles proved too much for the competition leaders.

It was a frenetic start to the match with a number of turnovers from both sides, with poor handling and breakdown work disrupting a number of promising early attacking raids. NSW Country Eagles drew first blood with a brilliant try to Mark Nawaqanitawase in the 6th minute. Inside centre Joey Walton produced a brilliant offload to release the Aussie Under 20s winger down the right flank, before the speedster fooled Leon Feke with a side step to
score a converted try out-wide. 7-0 to the Eagles.

The Eagles were in again moments later thanks to another brilliant try. Nawaqanitawase once again found space out-wide before linking up with fullback Connor O’Shea on the inside. The fullback showed fantastic vision to kick ahead for his captain Jake Gordon to finish off the long range try. Mack Mason once again converted to give the Eagles a 14-0 lead.

An Eagles drop ball off the kick-off gave the Force their first real chance of scoring. The Eagles poor discipline was once again on show with captain Ned Hanigan warned another penalty would see a player put in the bin. The yellow card came minutes later after Number eight Nick Champion de Crespigny collapsed the maul. The Force finally got their reward for showing patience inside the Eagles 22m with veteran hooker Heath Tessman crossing for his sides first try of the day. After spending a good four minutes inside the Eagles red zone the try had an element of inevitability about it as Tessman barged over next to the posts to leave the score at 14-7 to the Eagles after 20 minutes.

Heath Tessman undid all his good work moments later with a grubby late hit on opposite hooker Tom Horton. Tessman was sent for a deserved ten minutes in the bin to take away his sides one-man advantage.

With Tessman in the bin the Eagles took advantage at scrum time with a number of penalties resulting in a scrum five metres out. The Eagles front row of Robertson, Horton, and Johnson-Holmes produced a try for the purists as they forced a penalty try to give them a 21-7 lead in the 31 st minute.

It was once again through the scrum that the Eagles made their way up field resulting in a lineout 10 metres from the line. The Eagles went to the maul before winger Nawaqanitawase broke away and looked for Gordon with an inside ball. The Waratahs halfback bombed an almost certain try dropping it cold to let the Force off the hook.

Gordon brought the first half to a close after yet another scrum penalty to the Eagles to leave the score at 21-7 at the break.

After barely firing a shot in the first half the Force came out firing in the second term. Fullback Jake Strachan busted through some weak defence to put the Force hot on attack. After a number of phases it was once again through Strachan that they cracked the Eagles defence with a grubber kick bouncing into the arms of right winger Leon Feke to score an unconverted try to cut the deficit to 21-12.

The game began to descend into a rather scrappy affair with both sides lacking discipline at the breakdown leading to a number of penalties. However, neither side could apply consistent pressure due to poor handling and a number of rushed passes. Once again it fell to Nawaqanitawase to break the game open and he didn’t disappoint.

Receiving the ball flat footed the youngster chipped and chased in behind the Force defence with a shocking bounce falling to reserve Nigel Ah Wong to cross under the posts taking the score out to 28-12 for the Eagles.

However, the Force hit back once again after another penalty at the breakdown by the Eagles gave the Force a lineout inside their 22m. After some patient build-up it was through reserve hooker Alifeleti Kaituu that they crossed down the blindside to take the score to 33- 17. The fantastic finish to the game continued with a brilliant 15 metre cut out pass from Nigel Ah Wong found Ben Woollett unmarked to run 40 metres to score in the corner, taking the lead out to 35-17 with 12 minutes to go.

Blink and you would have missed another try as the Force hit back through some individual brilliance from winger Jonah Placid. After being cut to pieces all game by his opposite number Nawaqanitawase, Placid got some revenge, busting a number of tackles to score under the posts to cut the deficit to 35-24 with 10 minutes to go.

The Eagles finally put the game to bed winning a penalty off a maul to give them a kick at goal from 30 metres out, which Connor O’Shea duly converted to take the score to 38-24 with two minutes to go. In a fitting summation of the game thanks to a penalty at scrum time the Eagles were able to boot the ball out giving the Eagles a 38-24 win.

The yellow card to Heath Tessman was the catalyst for the Western Forces problems at scrum time. Up until that point they had managed to hold the Eagles scrum well but the flood gates opened when he went off and the forward pack never recovered. The Country Eagles finished with more than a dozen penalties at scrum time and were unlucky not to have forced a yellow card to one of the Force props.

Special mention must go to the NSW Country Eagles front row but Mark Nawaqanitawase was involved in three tries and posed a constant threat for the Force defenders. The young winger finished with a try, two clean breaks, one try assist, and should have had another if not for Jake Gordon’s dropped ball near the try line. With the Waratahs short of a winger for next season don’t be surprised to see this bloke pulling on the jersey at some point in the season.

Mark Nawaqanitawase would be the rising star if he wasn’t the man of the match, so the honour goes to fellow Aussie Under 20’s player Angus Bell. The young prop came on around the 50-minute mark and continued to punish the Force at scrum time, while also produced a bone crunching hit on former All Black second-rower Jeremy Thrush. Bell looks like a fine addition to Australia’s growing pool of prop forwards.