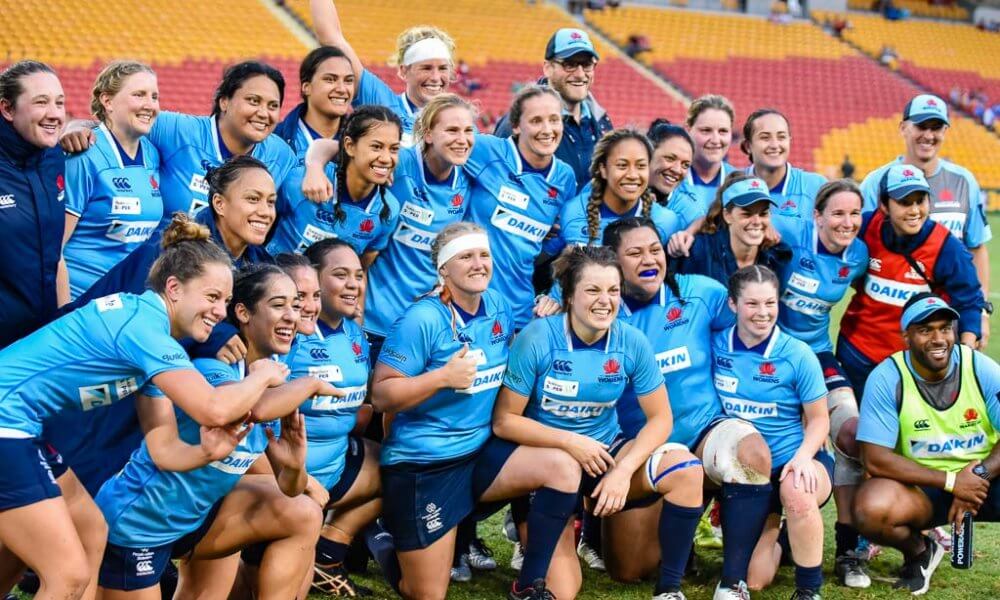 A note from the author: Sorry the pictures relating to the SuperW aren’t from the actual match, at the time of writing no pictures from the clash were available in our gallery for upload. 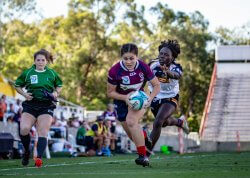 Alana Elisaia scored the only try in the first half but it wasn’t enough as NSW took their second title in two years.

Sunday afternoon saw the second instalment of the Super W reach its conclusion with the final being played out between traditional rivals, QLD and NSW.

Both teams had shown throughout the year they were to be reckoned with.  The Waratahs again didn’t drop a single match and the Reds’ only loss was at the hands of their southern neighbours, a tightly-fought 15-12 arm wrestle back in round three. Between them they’d blown away all other comers so it was only fair that last year’s combatants would again fight it out.

NSW controlled the ball from the outset and were quickly on the board through a penalty to Ash Hewson, 3-0 to NSW after 4 minutes.

QLD worked their way back into the contest and at 17 minutes they found themselves in front after Alana Elisaia touched down out wide.  The conversion went wide keeping the margin within any scoring play, 5-3.

The ‘Tahs turned up the pressure for the rest of the half, their forward pack troubling QLD across the park.  One wonders what impact the loss of Wallaroo captain Liz Patu had on Queensland’s set piece as the NSW forwards bullied QLD’s scrum, winning multiple penalties, resets and warnings and it was a similar story at the lineout with the sky blues picking off QLD’s throw with ease.  All this dominance was without any change to the scoreboard though, the Reds’ defensive wall was immense and it was still 5-3 at the half.

Coming out for the second half it was a similar story, both teams stuttered in attack while the Waratah engine room kept immense pressure piled on the Reds.  Eventually it all come to a head as Grace Hamilton crashed over from close range for the home side to take back the lead, 8-5 after 54minutes.

As time ran down both teams tried everything to swing the result their way, NSW kept cranking up the pressure at the set piece meanwhile QLD did everything they could to avoid them and tried to keep the ball in general play.

Neither team was able to add to the score, the match ended 8-5 and again the ‘Tahs are champions.  The Waratahs now having two complete seasons of Super W without a loss and QLD must be wondering just what they need to do to get one over their rivals.

Hewson even had a bit of fun with the post-match interview slipping in a sneaky “FCTTB” equivalent.  Speaking to rugby.com.au the ‘Tah captain said, “To win and to go through undefeated again is definitely a credit to our girls”

The sentiment was echoed by QLD skipper Kiri Lingman, “Credit to NSW. I don’t know what happened in that change room at halftime but they came out and absolutely gave it to us. I don’t think we were quite prepared in that second half and it’s obviously shown in the final result,” Lingman said.

Waratah coach Matt Evrard didn’t read from the script managing to praise their opponents without using the word “credit”.

“They had to earn every single minute of that tonight. There were parts of that game there where Queensland were better than us and we had to deal with that. To find a way to deal with it and find a way to keep them down that end of the half, and not let them get out, it took a lot of hard work. 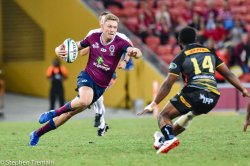 An alliterative clash was first up, with the Highlanders hosting the Hurricanes for a derby down in Dunedin.  After taking turns scoring tries in the first 40 the ‘Canes were first on the board after the rest, courtesy of a Barrett penalty, before the home side piled on 14 unanswered points to hold an 11-point lead going into the final quarter of the match. The visitors hit back with two long-range efforts to get back in front and the scores remained 31-28 at the final siren.

The Reds and Stormers played out a scoreless first half (apparently the first since 2013).  The Stomers went agonisingly close on two occasions without reward and then lost Siya Kolisi to the bin on the stroke of half-time. Come the second term, the teams finally woke up, the crowd too, presumably.  The Reds took full advantage of their extra man, up 14-0 by the time it went back to 15a-side.  The Stormers got one back before McDermott’s sniping run re-established the lead.  A late try to de Allende gave the away side a glimmer of hope until a late penalty to Hegarty put it beyond all doubt, 24-12.

In Johannesburg, the team that’s made the last two finals were blown off the park.  The Shorks, perhaps spurred on Tendai Mtawarira overtaking Adriaan Strauss as South Africa’s most capped Super Rugby player, came out firing, scoring four unanswered tries before the teams swapped ends.  The second half didn’t make much better viewing for the home side as Sharks added another 17 points tarnished only by a late try to the Lions.   Final score, 42-5.

It looked like an upset could be on the cards in Christchurch after the Brumbies kept the Crusaders scoreless for the first 44minutes. Their 7-point lead was quickly reeled in, overtaken and made to look dismal as the locals got their game going and ran in 5 tries with apparent ease.  In an unlucky turn of events, they weren’t playing “last try wins” and as such the Brumbies late try counted for little.  The final score of 36-14 consolidates the Crusaders’ position on top of the ladder and leaves the Brumbies precariously sitting one point ahead of last place.

Coming off their loss to the Sunwolves, the Waratahs no doubt went into the clash with the Blues looking to make amends and get their campaign back on track.  It wasn’t looking good early as Auckland jumped out to a 17-0 lead after only 17 minutes.  To their credit, the ‘Tahs twice got themselves within a single score, eventually going down, 29-32.  One positive for ‘Tahs was Folau scoring his record-setting 60th try in Super Rugby meanwhile for the Blues, they’ve now won four in a row and Ma’a Nonu belied his age and put on a masterclass.

After a tough day for the Aussie team all eyes turned to Melbourne to see what the Rebels could do against the Sunwolves.  And again, it was the Rebels backline turning it up.  Genia, Cooper and Meakes all scored a try and Hodge chimed in with a lazy hat trick.  The Rebs restricted the opposition to a solitary try in each half and to extend the scoring woes, Hayden Parker has finally missed a kick.  The final score, 42-15.

To finish the round, it was Bulls vs Jaguares up on the Hoëveld.  A tight opening saw the teams hit the sheds at 9-7 with Pablo Matera getting the only 5-pointer after a barnstorming 40metre run.  The Bulls looked in command as the game wore on, up 20-10 as the game entered the vital 7 minutes before full-time it was theirs for the taking.  The Argentinians had different ideas as they ran in two late tries and took the match 22-20. 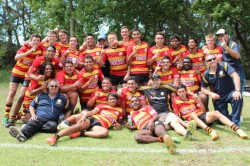 John Eales Shield Winners – “The Lloydies”
One of McDermott’s many legacies.

The Australian rugby community farewelled one of its heroes over the weekend.

He played two tests for the Wallabies including a debut against the All Blacks, in 1962 before declaring himself unavailable for the team’s tour to South Africa the following year.

At the time South Africa still had strict apartheid policies and while his indigenous heritage would not have excluded McDermott from playing it did mean that he would be considered an “honorary white” to allow him to play.  McDermott instead took a stand and recused himself from the selection pool and never played for the national team again.

After his rugby career was curtailed, he was admitted to the bar in NSW but remained involved in the sport that had reached the highest level by establishing the Lloyd McDermott Rugby Development Team which sets out to “use Rugby as a tool to provide opportunities and education to enrich the lives of young Indigenous males and females.”

Administrators and players alike joined the outpouring of tributes for McDermott

“Lloyd will be sorely missed by the Aboriginal and Torres Strait Islander communities.

“The rugby community is deeply saddened by the news of Lloyd’s passing, however, his impact on the sport will never be lost and his name will never fade. He was an extraordinary man.

“Through his exploits on the field and in particular for what he did for First Nations people both during his playing career and beyond, he has enriched the lives of so many and provided inspiration and opportunity for thousands of Indigenous Australians.” Raelene Castle, RA CEO.

The Aussie 7s team sported black armbands during their matches as a show of respect.

Paying our respects after the passing of Lloyd McDermott. Our thoughts & prayers are with his family and friends, and the wider Aboriginal and Torres Strait Islander community. pic.twitter.com/oV8m1xElt6 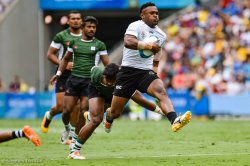 Fiji are on the charge. Third and first in the last two rounds.

Fiji have done it again.

For the fifth time in as many years the Harlem Globetrotters of seven a side rugby has taken out the Hong Kong sevens.  The victory is also the Fijian’s third win from seven rounds this season and sees them overtake New Zealand for second place and also closes the gap ever so slightly to series leaders, the USA, who finished with the bronze.

Fiji cruised through their pool dispatching Kenya, Australia and New Zealand en route to the knockout stages.  The quarter final didn’t prove so easy as Argentina lead at oranges before three second half tries saw them through to the semi against series leaders, USA.  Fiji were never headed during the game and Fiji booked their spot in the Cup final against France, last round’s runners-up.

The final was a similarly one-sided affair, France only got on the scoreboard through a penalty try as Fiji strolled away with the match and title, 21-7.

Australia had a tough time of it. Losses to Fiji and New Zealand in their opening two matches meant despite their win against Kenya they were only able to qualify for the Challenge Trophy finals.  They took on Portugal in the quarter final and recovered from a 14-point deficit at the half to take the match 26-21.

The Aussie’s tournament came to end in the semi final against Scotland, going down 19-17 thanks to Scotland’s superior goal kicking.

Coach Tim Walsh struggled to articulate the underlying reason behind his team’s run of poor form but didn’t shy away from putting his hand up to accept responsibility.

“It doesn’t feel like it right now and results don’t reflect it, but we made some headway from a longer-term perspective this weekend,” he said.

“I don’t have excuses and I am accountable for this team’s performance.

With three rounds still to play the USA hold a slim lead atop the standings.  They sit on 130 points (out of a possible 154!!) with Fiji on 123 and New Zealand slipping to third with 118.  South Africa hang onto the final Olympic qualifying spot with 99 with England in hot pursuit on 90.

Samoa, Australia, Argentina, France and Scotland fill the remainder of the top ten and are going to have to do it the hard way to book their place in Tokyo 2020.

The next round is this coming weekend in Singapore.