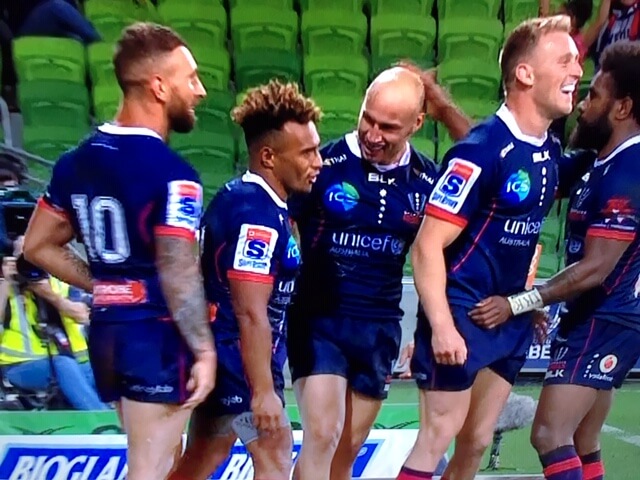 The Rebels return home after four weeks on the road to face a confident Sunwolves team.

Both teams come into this encounter following wins against Australian conference rivals. The men from Melbourne over the Reds at Suncorp Stadium, and the Sunwolves over the Waratahs in Newcastle.

The Sunwolves got things underway, kicking off deep into the Rebels 22. However, early pressure from the Rebels resulted in penalties near the Sunwolves line. Good early defence from the Sunwolves held out the Rebels but after a second scrum, Reece Hodge crashed over in the 7th min for his first of 3 tries. Quade Cooper converts, making it 7-0 to the boys in blue.

On the restart, the Sunwolves camped down in the Rebels 22 with a few penalties resulting and the Sunwolves opting for lineouts. The Sunwolves coughed up the lineouts but with two clearing kicks from Cooper not going deep, Sunwolves flyhalf Hayden Parker decided on a subsequent penalty to take the points. He didn’t miss, of course, 7-3 to the Rebels.

On the restart Koroibete mistimed the tackle, giving away a penalty to the Sunwolves with a kick downfield for a lineout. A dropped ball from the Sunwolves after a hard hit from Koroibete resulted in a scrum to the home side.  A brilliant line break by English off the Rebels scrum was followed by an offload to Hodge for his second try of the evening. Cooper converts, bringing the score to 14-3.

The home side looked like they would again be next to score with some great offloading but a turnover to the Sunwolves nearly saw them score a try at the other end of the field if not for an ankle tap from Billy Meakes. A penalty to the Sunwolves saw them try for a lineout but it was stolen by Adam Coleman in another Rebels lineout steal.

Making their way back downfield, off the back of a scrum win, Cooper kicks ahead for Billy Meakes to regather off a Sunwolves fumble (read: blunder) to dive next to the posts for 5 points. Again, Cooper kicks it over, making it 21-3 to the Rebels.

Semisi Masirewa crashed over the Rebels’ line for the Sunwolves not long after the restart but the TMO disallowed it after good defence from Tom English, so it was taken back for the penalty advantage. Referee Nick Berry warned the Rebels for too many penalties in the Sunwolves 22, discipline again being an issue for the Melbourne men this week. Masirewa got a try in the corner not long after, though, off a scrum the Sunwolves took as their penalty option. Parker missed the conversion, ending his impressive kicking streak at 28, scores 21-8.

The Cooper restart did not go 10 metres so a Sunwolves scrum was set on halfway. A penalty resulted to the Sunwolves off the scrum with Parker taking a kick to the sideline for a lineout. They lost the lineout (again) and the Rebels, via Maddocks, cleared to near halfway.

A bit of to-ing and fro-ing followed. With two minutes left in the half and off a Rebels scrum, Meakes broke the line and offloaded to Hodge who nearly made it for a hat trick but passed the ball to Cooper to take the pie. Cooper converted his own try on the half time siren and both teams going into the sheds at 28-8 to the Rebels..

The home side kicked off the second 40 minutes with the Sunwolves picking up the pace from the get-go. The Sunwolves would be the first to score in the second half with try scoring machine Semisi Masirewa bagging his second try with some good running and quite frankly, poor defence from the Rebels. Parker converts, closing the gap to 28-15 in favour of the Rebels.

Some scrappy play from both teams ensued, but mostly from the Rebels. The Sunwolves advanced to the Rebels 22, with the home side on a second yellow card warning. The Sunwolves look to score their second try but are held up. A scrum is held and the Sunwolves go for the corner but good Rebels defence hold them out.   Subsequently, down the other end of the field, Hodge charges down a poor clearing kick and grabs himself a hat trick. Cooper converts Hodge’s try to bring the scores to 35-15.

It didn’t take long for the next try. A lineout 45m out is won by the Rebels with Genia breaking the line to score a brilliant individual try under the posts. Yet again, Cooper converts the try, scores 42-15.

In the 75th minute, Rebels reserve back, Semisi Tupou is carded for a cynical offside, followed shortly afterwards by the Sunwolves’ Nathan Vella for dangerous play.

The Rebels tried to pressure for a final try but the Sunwolves had other ideas and on the final play  Campbell Magnay was carded for a high tackle after the full time siren. The Sunwolves couldn’t make anything of it and the scores finish at 42-15 to Rebels, bagging a bonus point win for their efforts.

The Sunwolves may have shown up the Tahs the week before with an upset win, but the home side played the Sunwolves at their own, free-flowing game, only better. The Rebels increase their lead in Aussie conference with their next game scheduled for another home game next Friday night against the Stormers from South Africa.

Quade Cooper continues to call the shots for his new team.

The Rebels always looked in control, even though there were a few moments in the game where it looked like the Sunwolves might find a way to steal a win. Once Reece Hodge scored his third try in the second half, the gate was shut. The horse had bolted.

Can I only pick one? Really? This makes it difficult. OK, he has had a relatively quiet start to the 2019 season, but tonight Reece Hodge really lit it up, bagging a hat trick in the process.

So many Rebels have put their hand up (again) for Wallaby selection; Will Genia, Quade Cooper, Reece Hodge, Anaru Rangi, Luke Jones Isi Naisarani, just to name a few. Koroibete had a much more solid game this week, but I am still not convinced he is Wallaby material.