Monday’s rugby news has Matt Toomua going to England,  Mens Sevens team qualify for Rio Olympics, McCaw to announce playing future and All Blacks to play Ireland in the US next year.

Wallaby Matt Toomua will leave Australian Rugby at the end of 2016 after signing a three year deal with English club Leicester Tigers.

French sports publication, L’Equipe, reported over the weekend that Matt Toomua would join English Premiership club Wasps as their marquee signing, however, it was revealed overnight he would be going to Leicester.

Toomua is contracted to the Brumbies until the end of 2017 after resigning with the Super Rugby club in 2014 for further three seasons but will exercising a get-out option for the final year of his Brumbies contract.

Toomua has vowed to “show how much the club means to me” in his final year with the Brumbies. 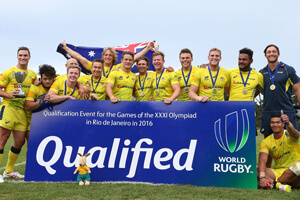 The Australian Mens Sevens team has qualified for the Rio Olympics after Australia beat Tonga 50-0 in the final of the Oceania Regional Olympic Qualifying Tournament in Auckland yesterday.

The Aussies raced out to a 31-0 lead at halftime in the final after a double from both captain Ed Jenkins and Pama Fou.

“We’re very pleased. The boys put in a ruthless performance in that last game and it was just desserts for the effort they have put in – not only in the last three months with me, but for the last three of four years too,” said Men’s Sevens interim Head Coach Tim Walsh

“It’s a weight off everyone’s shoulders [qualifying for Rio] – if you look at it in a positive way, then these players will be battle-hardened and more able to handle those pressure situations.”

An announcement on the playing future of All Blacks captain Ritchie McCaw is expected to be made on Thursday.

McCaw is set to confirm his retirement from the game after leading New Zealand to back to back World Cups.

“He wanted to go into 2015 and enjoy playing the year without really worrying about whether everything he did was the last time he did it. He didn’t want the team distracted by that and now he has asked for a little bit more time before finally making a decision and announcement,” said New Zealand rugby chief executive Steve Tew.

“He won’t be too far away from getting to that point and if we give him a little more space and have a little more patience we’ll all be rewarded with the ultimate answer shortly.”

Ireland is set to play the All Blacks in a historic test match at Soldier Field in Chicago next year .

Ireland will meet the All Blacks in Soldier Field, Chicago, on Saturday, November 5th, before hosting a Tier 2 country a week later at the Aviva Stadium.  They will then play New Zealand again on November 19th at home.

New Zealand last played at Soldier Field in 2014 where they beat the United States in front of a sell out crowd of 61 500.

Ireland are still yet to beat New Zealand in 28 attempts dating back to 1905.  Ireland came close to knocking off the All Blacks in 2013 but an overtime converted try by Ryan Crotty gave the All Blacks a 24-22 win.