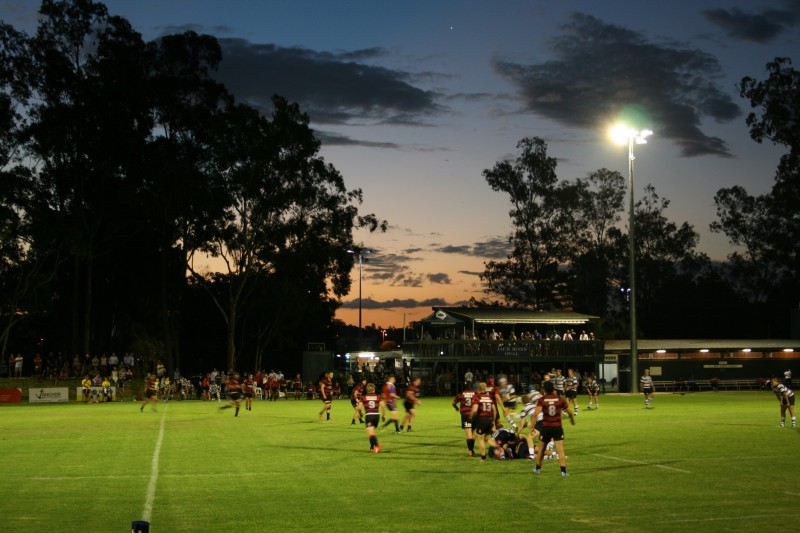 Brothers were unable to christen their new Crosby Road floodlights with a win on Friday night, as they went down 8-7 in a defence-dominated match to the touring Christchurch Football Club.

In a tight, hard fought match, only a solitary point could separate the sides as both teams failed to convert spells of possession in each other’s 22. Even the half time introduction of teenage tight head sensation, Taniela Tupou failed to produce any points for Brothers – but the 18 year old gave clear indications as to why so many Reds fans are so excited about the Tongan born front row prospect.

Christchurch Football Club, the oldest rugby club in New Zealand (and second globally only to Blackheath in England), have developed a partnership with Brothers stretching back over the past 40 years, with numerous player exchanges and reciprocal tours in recent years. The Canterbury RFU Metro Division 1 side provided stern competition for Brothers first ever Premier Level match under lights at Crosby Park.

Both sides named Development XV’s for this friendly match, and it was Brothers who took the early advantage. In a dominant first half display – where for the first half an hour the tourists struggled to get their hands on the ball.

It took just 10 minutes before Brothers scored, number 8 Harry Symes burrowing over the line after a series of pick and drives from the Brothers pack.

Brothers domination of the first half continued, but the tourists defence held firm, holding up Brothers tryline drives three times. These chances proved to be costly later on as errors crept into the Brothers game.

It wasn’t just the forwards attacking the advantage line. Exciting line breaks from both centres caused the scrambling Christchurch defence problems in the first half, but the Kiwi’s were more than up to the challenge, with some excellent covering tackles from fullback Matt Thatcher and number 8 Jordan Jackett snuffing out the danger.

The Brothers scrum looked incredibly solid in the first half, but the introduction of Tupou at half time added significant size to the front row. With Tupou moving to tight head, the Christchurch coach immediately moved to counter the threat posed by the “Tongan Thor” at scrum time, incredibly bringing on a loose head whose thighs (almost) matched Tupou’s giant pins.

Although solid in the scrum, Tupou also showed himself in the loose. The 130kg teenager had 4 carries – making 30 meters (at least half of which were after the initial contact) and one offload which lead to a 50 meter break.

One Brothers coach commented, “Sometimes he thinks he’s a back…”, as we watched the giant Tongan steady himself under a high ball. As Tupou calmly claimed the ball and set off on a darting 20 meter run that took three red and black shirted defenders to drag him down, the coach remarked “But he’s got the hands and he’s quick!”

And quick he is. For someone his size, he has fantastic pace – and the added power he showed in bulldozing through the contact when he found himself in the back line is clearly what’s got Reds coaches excited.

Despite the introduction of Tupou, errors were increasingly creeping into the game from the home site. Having won the penalty count 6-3 in the first half, Brothers conceded 5 penalties to 1 in the second. This gave the tourists an increasing amount of possession and allowed the exciting looking Christchurch backline the chance to get into the game.

An increase in handling errors and turnovers from Brothers gave the tourists better field position from which to launch attack. After a series of 5m scrums on the Brothers line, the navy and black defensive line was finally breached with a push over try from the visiting forwards.

Crucially, an excellent two man charge from the Brothers players forced the conversion to be struck wide, hitting the upright. This allowed Brothers to maintain their slim advantage with just 10 minutes remaining in the game.

The closing stages took on an increasingly frantic tone, with each side wrestling for the upper hand as the clock ticked down.

Tempers frayed after a penalty at the breakdown, and in the confusion, a quick tap from Christchurch scrum half Steve Alfeld marched the ball 60 meters down into Brothers territory.

With the ball in the Brothers half, any error would be harshly punished. A Brothers knock-on gave Christchurch a scrum on the 22, and the pressure told, with the referee blowing for a penalty with just one minute to go.

The Christchurch substitute kicker made no mistake from dead in front – consigning Brothers to a one point defeat. 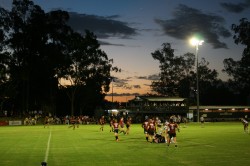 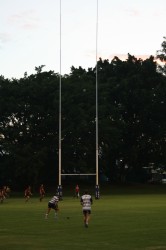