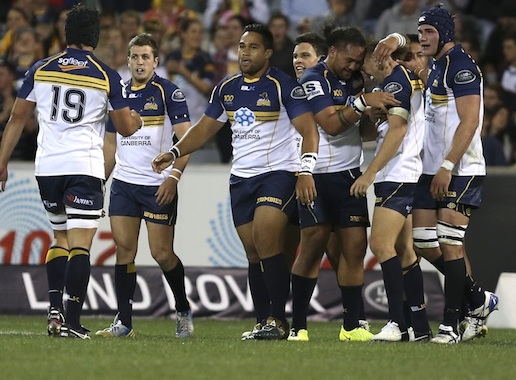 The Brumbies have returned from South Africa to take on the Bulls who went close to knocking off the Reds last week.

Would jet lag get the better of the Brumbies or would the Bulls get their season back on track before heading home?

Both teams started off tentatively and were playing to not give up any easy field position in a theme that dominated the first half.

Both kickers had early shots at goal but missed as neither team really got any momentum.

It took until the 19th minute for the scoreboard to be troubled with Christian Lealiifano landing the first of three first half penalty goals.

The middle of the first half wasn’t pretty for the fans as they witnessed a kick fest but the Brumbies finally took the initiative and played the game through the forwards.

Then just before half time, the home side scored the first try of the night fullback Robbie Coleman after some great lead up play from Scott Sio, who started in place of Ben Alexander, to leave the half time score at 14-3

The second half started with the Bulls having all the momentum with a series of penalties gaining their way into the Brumbies’ 22.

They went close on one occasion when winger Lionel Mapoe was denied a try by dropping the ball but they weren’t to be denied when Jurgen Visser went over in the left corner.

Steyn added another penalty shortly after to close the gap to one as the crowd started to become nervous as some tough calls started to go against their side.

As the game wound down, the Brumbies managed to regain their composure and were awarded a penalty that Lealiifano converted to stretch the gap to four points.

He added another penalty to make the lead seven points and it seemed the Brumbies could hold on for a win they had to work extremely hard for.

But in the last minute the Bulls scored a try to centre JJ Engelbrecht and Steyn’s conversion levelled the score 20-20 with only seconds remaining.

Then after the siren sounded, the Bulls tried to run the ball out of their own half but instead gave up a penalty 10 metres inside their own half. Lealiifano stepped up with ice cool veins to slot the winning goal to give the Brumbies an unlikely 23-20 win.

Some quotes from the post match including this gem from Jake White on the last penalty:

I thought he [Lealiifano] kicked it really well

In comparison, Frans Ludeke from the Bulls said this of the last few phases:

…clearly offside, but that’s the game

With around 12 minutes left, the Brumbies landed a penalty that seemed to halt the Bulls’ momentum. Closely followed by Jonathan White’s penalty to the Brumbies after the siren.

Scott Sio – further honours should be coming his way.