Review: Highlanders v. Reds – The Battle For The Glasshouse 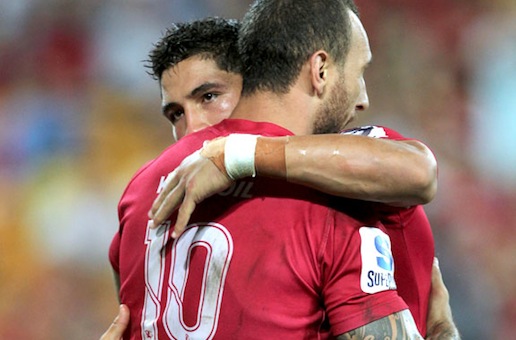 Review: Highlanders v. Reds – The Battle For The Glasshouse

The Reds travel down south to Dunedin at the bottom of New Zealand’s south island to take on the Highlanders. It’s a billion years since they’ve had a win in the city. But this is a team that thrives on breaking hoodoos. The locals though, thrive on keeping them running. The Highlanders have looked good losing while the Reds have been unconvincing winning. Today will make the prospects of both teams a whole lot clearer. What ever happens it isn’t going to be boring!

Both teams were determined to play with the right frame of mind and a fast, open game of rugby broke out. The opening exchanges were riveting with the game surging from one end to the other. The halfbacks, Will Genia and Aaron Smith, were everywhere with Genia in particular giving a master class.

The Reds were the first to score off a Cooper break. Cooper seems to be finding a little of his old magic. He slipped through the right flank of the Highlanders and threw an inside pass to Hanson. But the ball was tapped back by the Highlanders. Somehow Hanson ended up with the ball between his legs and rolled over the line to score. 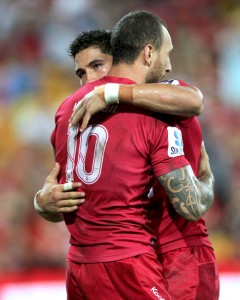 Good to have you back bro

The Highlanders then hit back with two quick penalty goals and a converted try off a quick tap in front that let Elliott Dixon to crash over. The Reds spent the next ten minutes camped deep in Highlanders territory. They declined two penalty shots and ran a rolling maul off a lineout that carried Liam Gill over the line. From the kickoff they were straight back on  attack until Andrew Hore infringed at a ruck and was binned. Cooper’s penalty shot hit the post and the Reds had loose ball in the Highlanders’ 22. They bashed the ball towards the posts and Jake Schatz scored near the post to take the score to 21-13.

The Highlanders and Reds got a penalty each either side of half time to take it to 24-16. The Reds were still dictating play and 13 minutes into the half Cooper cleverly feinted to the left to give Genia room to score on the right off a five metre scrum. The understanding between the halves is pretty to watch.

The final quarter of the game saw the Highlanders roar back into contention. In the sixtieth minute Hosea Gear scored off a fantastic backline move and some great backing up. From 40 metres out the Highlanders backs swept across the field until they found space on the right wing. The play cut back infield and Gear used his power to charge over the line. The play was definitely with the New Zealanders now. They scored again at 67 minutes. After sustained pressure Nonu pirouetted through the defence to move his team within 1 point of the lead. The Reds’ defence until then had been rock solid. The ease that Nonu got through with must be a worry.

The last ten minutes was nerve racking for everyone. The Reds moved ahead with a penalty goal, the Highlanders pegged the lead back with their own. But they couldn’t do enough to take the lead. The Reds hung on desperately until they kicked the ball out from a scrum free kick after full time.

Wow, what an entertaining match! The Highlanders are desperately unlucky to be carrying a 0-5 win-loss record. The Reds managed another very close victory. Maybe I was wrong? Nothing is any clearer after that game.

In a game full of exciting open rugby it’s hard to pick a moment or a player. TJ Ioane made a huge impact for the Highlanders off the bench, as did Lima Sopoaga.

But if I have to pick a moment I guess it has to be Andrew Hore’s sin-binning. The Reds scored while he was off the field and ten minutes without a tight forward would have had a huge effect on the four other guys doing the heavy lifting.

Honorable mentions to Quade Cooper, James Hanson, Liam Gill and James Horwill for the Reds; and to Aaron Smith, Ben Smith, Hosea Gear and Buxton Popoalii for the Canes. Every player in both teams can feel proud of that match.

But the guy who looked like a walk-up start to any world 15 right now is Will Genia. He is the GAGR MOTM.

Quade Cooper is finding some of his old spark in attack. Horwill looks huge and is moving bodies. Tapuai looks dangerous but I wonder what would happen if he passed sometimes.