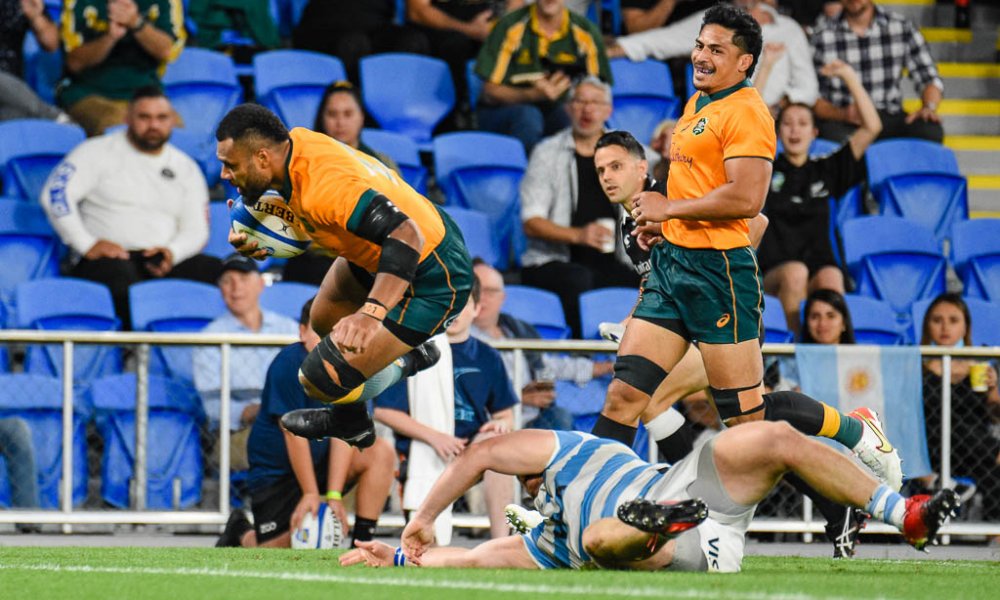 G’Day GAGR’s! Well well well! Three holes in the ground, usually containing water. After three weeks of double-headers, we have a bit of a rest. Which to be honest I think Mrs BL will be pretty happy about, not having to endure 5 hours of Rugby each Saturday afternoon / evening. With three weeks to wait ‘til we play Japan, we have a bit of time to take stock and absorb the Rugby Championship and its meaning. So strap into your chairs, make sure your coffee cups are out of your hands, and join the wild ride that is BL’s crazy Tuesday news.

Samu Kerevi – How the hell are you?

On Saturday afternoon, our resident Flying Fijian came from the field after a solid 51-minute shift during the Wallabies four in row victory over the FISM’s. Samu was seen leaving the ground on crutches after the game, with ‘Moses’ Rennie confirming he would be heading to have the full works and jerks of scans in the next few days.

“There are question marks around Samu” coach Rennie said in his post-match press conference.

“It used to be called a sprained ankle in my day. It’s now called syndesmosis, which is much worse, evidently.” “We’re hoping it’s not too long.”

The Wallabies later confirmed he still remains a chance to tour as they review the scans. And they are unlikely to make a call until they know the full extant of his injury. Rennie confirmed they will look to name their squad for the Tour later in the week, with the expectation they will take 35 or 36 players with them to tour Japan and Europe.

* Sources are saying that the injury isn’t as bad as first thought and the Samu Kerevi will return to training within two weeks.

The Rise and Rise of ‘Senior’ Quade

Let’s cast our minds back about 8 weeks ago, when the rumours first started about a Mr Quade Cooper being re-called to the Australian squad. Then a week or so later, when he actually was drafted back into the 40-man squad. People (except me, and few other GAGR’s) were losing their brains! Saying that Dave Rennie must be desperate, and that there was no way in ‘god’s green earth’ was QC getting a run on with the Wobs again.

Well as many of the commenters, and journalists have now declared, they are having to eat bucket loads, and in many cases mining truck-loads of humble pie. As an unabashed QC fan, I am not going to say I told you so, but I am just glad that we are where we are now!

Cooper clearly demonstrated his ability to be the Back line General that we Wallabies have needed for the last 5 years. That and a steady kicking boot (yes, he missed a couple on the second test against Argentina, but so did all three other teams in the double header).

What became evident in the last two tests was when Rennie went to the bench, our attack lost its form. Whilst it was evident that the Wallabies were trying to step up the tempo, it was noticeable that Wobs attacks wobbled, the moment Cooper and White left the deck.

Rennie has a bit of time now to examine this and work out how the finishers will step in on the northern tour. However, this little black duck is of the view, that the 10 ‘jumper’ now clearly belongs to Quade, and he will be wearing it for a while to come.

The Bokkies start whingeing about ‘Bio-bubble’ for the Northern tour

Well, hot on the tails of the Saffa’s disastrous Rugby championships, The DDF’s are suggesting that if their players have to spend more time in bio-bubbles on their Northern Hemisphere tour, then they will have to consider taking their bat and ball and going home.

This issue has reared its ugly head with the Bokkies heading home for a well-deserved short break after a very poor Rugby Championship campaign. Other than beating the sheep Lovers, their tour did not go well, with even their water-boys were in for stick.

Unfortunately, their time at home in Covid riddled SA, will be short-lived as they will head to Cheese Eating Surrender Monkey land in late October before then playing the Taff’s, the Scott’sweigans and the Soap Dodgers in November.

Maybe it is just me, but members of most countries armed forces spend longer away from home, in worse conditions, getting paid f%ck all in comparison to a professional rugby player, and getting shot at half the time. Representing your country is a privilege and having a job that pays as much as these guys earn, in a nation were most people would be happy just to have a job, seems a bit of a whinge to me. Cue the criticism!