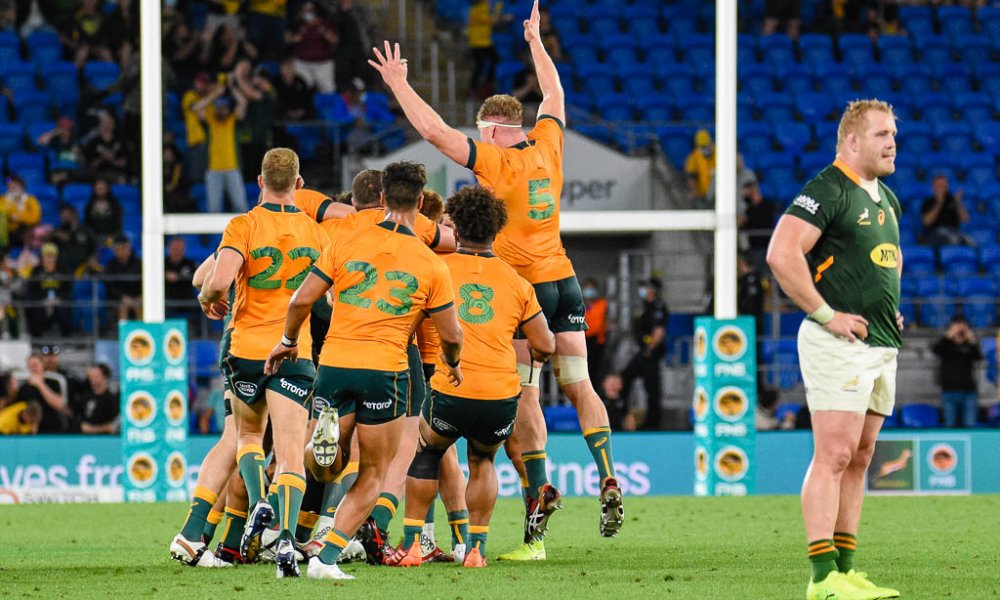 Tuesday’s Rugby News looks at Dave Rennie’s reaction to the Aussie win, the Force welcoming Mark Ozich, Frustration with Bank’s to continue, and some rambling about life and Jordy Petaia.

It’s been a tough start to the Rugby Championship for the Wallabies. Two games at one of the true fortress’s in world rugby. Eden park followed by another drubbing in the lockdown delayed game in Perth. No one could forgive Wallabies coach Dave Rennie for being a little relieved after his side manged a nail biting win over the World Champion South African’s but, he was as pragmatic as ever when asked to comment.

“It’s huge. (But) if ‘Hoops’ threw a dummy, we might not have needed a penalty late in the game,” he joked after the match.

“There’s a lot of character in this group, which is why we’re incredibly disappointed with the All Blacks series.

“We played a lot of good footy in there and had situations where we just needed to be a bit, a little bit more clinical, and we could hurt them.

“There’s been so much hard work by so many people, so it’s fantastic to get a result like this.”

After a sloppy performance with coach Jacques Nienaber blasting their discipline, Rennie is preparing for a fired-up Springboks side to bounce back on Saturday at Suncorp Stadium.

“It’s a start. We’re not going to get carried away with this,” Rennie said emphatically.

“Huge character and we’re proud of that, but it’s only a start, we know we have three more games in the series, and I’m pretty confident the Springboks will be keen to rip into things Saturday.

“We’re mindful of that, but we’re excited to play against the best teams in the world, it’s great learning for us.”

Mark Ozich is joining the Western Force from Hawke’s Bay as their attack specialist.

Ozich is joining as attack specialist in a coaching group led by Tim Sampson that will be further boosted by Force academy coach Dylan Parsons as skills coach and current defence boss Nick Hensley.

Ozich will strengthen the New Zealand links at the Force after Chris Goodman joined from Super Rugby powerhouse Crusaders to head up the club academy.

“Mark is a fantastic addition to the coaching team,” Lewis said.

“He is a coach that has achieved and understands success, having won two national title school titles and winning silverware with Hawke’s Bay in recent years.

“He is an exceptional educator and communicator who will instil confidence and belief in the squad to be the leading force in Super Rugby.”

Ozich, who is also a qualified teacher, took Hawke’s Bay to championship success in the NZ provincial competition and the Ranfurly Shield last year.

He joined Hawke’s Bay as an assistant in 2017 before taking the top job.

He was this season’s Highlanders Super Rugby Aoteroa under-20 coach and has been involved in coaching NZ Secondary School teams and the Southland Stags.

Bad news for punters who like a fullback who’s a bit elusive or can break a tackle. Wallaby coach Dave Rennie thinks Aussie fullback Tom Banks is going all right and doesn’t know what you’re all going on about.

“Tom, throughout the French series and early All Black games, was really strong. Very good under a high ball, he’s got a smart kicking game.

“He’s got good gas, he’s probably at his best when he is hovering around 10 or looking for opportunities back in and around the ruck. I know there’s been talk about Hodgey [Reece Hodge] as well, he is definitely an option back there as well.”

Jordan Petaia is the man more likely to provide cover should it be required across the back three, while also offering a midfield option from the bench.

Rennie is keen to see more ball in Banks’ hands to unlock to attacking weapon so often seen at Super Rugby level with the Brumbies, where he is clearly a focal point in attack and looks lethal around the ruck, surging onto short balls and flick passes from the likes of Nic White and Ryan Lonergan.

“We obviously want to see as much ball in his hands as possible. We’ve talked a lot about getting him in at first receiver on short sides. He’s starting to pop up there.

Jordy was up for it!

I’ve worried about Jordan Petaia for a while. The passing of his father or the string of injuries he’s had over the last couple of years, or both, seemed to be weighing heavily on him. He didn’t look like he was in a good place. Of course, I say this never having been within 20 metres of the man, and I could be way off. And I genuinely hope I am.

I lost my father when I was in my early fifties, and it was a real burden to carry. I still think of the lessons he taught me and the laughs we had constantly. Especially today on what would have been his 82 birthday.

So when I saw how fired up and, for want of a better word, excited Jordy seemed to be at CBUS stadium on Sunday it made my night.

It was also terrific to see him run so freely. Again this is purely my observation, but he legs just seem bigger. Here’s hoping the injuries are behind him.

The other guy who seemed bigger and stronger to me was Quade Cooper. I swear back in the day he clocked in at about 87 kilos, but the program listed him as 91. It certainly didn’t seem to slow him down and there was even a trademark jink or two thrown in for good measure.