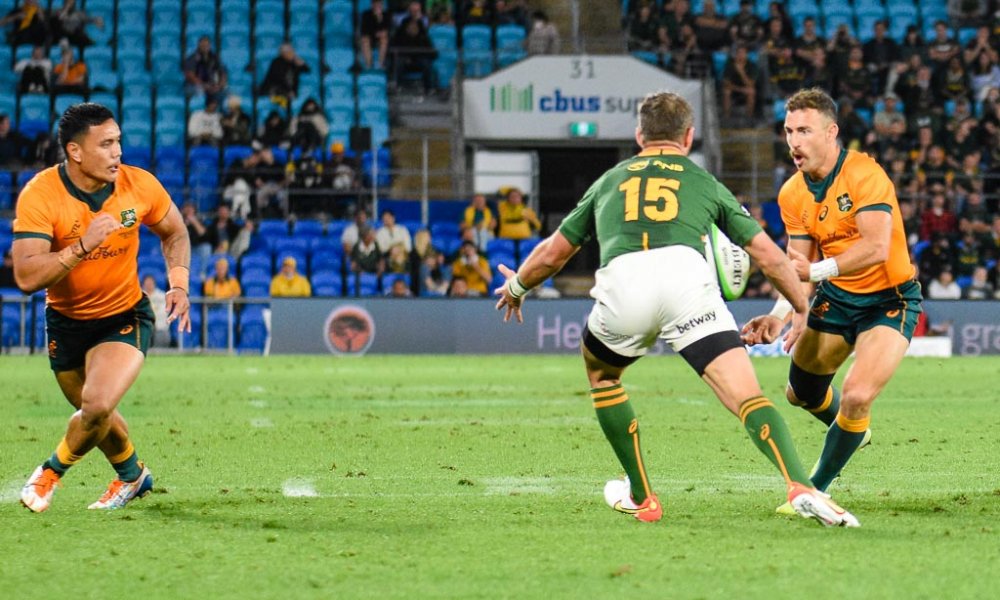 Filling in for Yowie today. Sorry I can’t match his sense of humour and smartarsedness (I think that’s a word), and sorry for 2 Kiwi posts in a row on Tuesdays. When I saw the picture below, I immediately thought of Nutta and so couldn’t resist putting it up. Honestly, I almost get more lip from the front rows complaining about each other than I do from the 9’s at times. They all think they’re innocent, and they all think the referee doesn’t know what happens, so they’re safe.

Some good news today for Quade as it appears after the three drubbings by the All Blacks, being a crucial part of the win against the World No 1 is enough to get citizenship. Good on him and good to see the plaudits continue. After deputy Labor Senate leader Kristina Keneally reignited calls for Cooper to be granted Australian citizenship on Monday after his match-winning performance for the Wallabies on the weekend, the Herald can reveal that Cooper is set to receive his wish. Interesting wording here in the statement Cooper’s heroics against South Africa may have had the desired effect, with Alex Hawke, the Minister for Immigration, set to announce a slight policy change that will allow individuals such as Cooper to be granted Australian citizenship, according to sources with knowledge of the matter. Cooper, who was born in New Zealand before moving to Australia at age 13, has had four requests to become an Australian citizen denied. Cooper’s latest application was rejected because he provided “no evidence” that he had “engaged in activities of benefit to Australia”. Prior to this weekend’s play.

I find it interesting to see the amount of love he is getting on so many levels. The Roar and Fox Sport both have about 7 posts spreading his love, and other sites are also saying similar things. While I am sure that he appreciates all the love, I’m also sure he understands that a lot of other players were also part of this win, and he must be having some quiet smiles about some of the posts. Good on him and I hope he enjoys it while he can, as we know that supporters are a fickle bunch and if the Boks win big next week it just might all change. Hopefully the paperwork for the citizenship is signed before then.

The All Blacks will welcome back a quintet of big bodies into the selection mix this week, which is timely to say the least as they contemplate a six-day Rugby Championship turnaround and a physical challenge getting tougher by the week. Forwards coach John Plumtree gave a major hint that they intend to dig deep into their resources this week for Saturday’s second straight clash against the bruising Argentinians when he spoke to Kiwi media from the Gold Coast on Monday. He confirmed that hooker Codie Taylor, props Ethan de Groot and Ofa Tuungafasi, lock Patrick Tuipulotu and loosie Ardie Savea would all likely be available for selection this week as they assess their options in the wake of last week’s game against the FISM. The two teams will go at it again on Saturday in Brisbane, and Plumtree confirmed the bigger picture – namely those two tests against the Springboks that follow on consecutive Saturdays – would have to be taken into account this week. “We haven’t selected the side yet, but Foz (coach Ian Foster), Foxy (selector Grant Fox) and I will be having some conversations around that,” he said. “We’ve got three physical test matches coming up with Argentina and then the Boks times two, so it’s going to be a tall order over the next three weeks. We’re going to have to use our men to make sure going into those Boks games we’ve got plenty of energy.”

Personally I like the idea of a tournament for the Rugby Championship, and it will be interesting to see if this continues going forward, especially with COVID likely to be with us as an issue for some years to come. I think it’s a good option moving forward, and hopefully it’s something that can be shared between the partners if it continues. However, it does come at a cost. With so many games so close together, there is a definite need for some depth in the squads to cover both injury and fatigue. I think the ABs are able to manage this, but I think both Australia and Argentina would struggle with one or two injuries and this may prevent the tournament idea from continuing in the future.

In the world of stupid, it appears World Rugby is making a push to be at the top of the tree with a suggestion that the RWC could happen every 2 years rather than every 4 as it currently sits.

According to a report in the London Telegraph, World Rugby could consider the possibility of holding the men’s and women’s Rugby World Cup every two years instead of four. The men’s tournament was first held in 1987 and has been staged every four years. The first women’s World Cup took place in 1991 and, after a three-year gap to 1994, it has been held every four years.

“Biennial World Cups have been considered before, and they’re definitely something that we will continue to consider,” chief executive of World Rugby Alan Gilpin told the Telegraph. “It’s an interesting concept, especially when you think about the global development of the women’s game, too. But the men’s calendar is very congested and complex, with a lot of different stakeholders, and we have to make sure we engage with them all before we consider a World Cup every two years.”

Opinion Rant begin. “Actually NO Alan Gilpin, It’s not an interesting concept at all, it’s a friggen stupid idea born in the brain of an idiot with no understanding of the costs and effort required from the tier two and three teams that do manage to get up once every 4 years or the impact this will have on the workload of the players involved.” I honestly can’t fathom the level of stupidity that has penetrated whatever headspace this idea was born in. Add to this the idea that having a Rugby 12’s is somehow also not going to create additional pressure on the rugby calendar, really shows how much some people actually don’t care about players welfare.

The Wallaroos have announced Jay Tregonning has been appointed head coach until the end of 2022.

Tregonning served as an assistant coach for the Wallaroos at the 2014 World Cup before going on to coach at the national level with the Australian Schools and U18s program as an assistant coach. With the rescheduled World Cup in 2022 on the horizon, Tregonning was eager to work with the squad as they look to improve on their seventh-place finish in 2017.“It’s exciting to join the squad at this time, I know the side is itching to get together in preparation for next year’s Rugby World Cup,” he said in a statement. “The squad is bursting with very talented players, and it’s going to be a great year ahead as we get prepared for the World Cup.”

This is great news, and it’s good to see the Women’s rugby going ahead after all the bad news they had recently and the disruptions they have had over the last 2 years. Personally, I love watching the women’s games. I find them skilful and without the attitude you sometimes get in the mens matches. Some of the ladies have fantastic skills, and they seem to use the ball better than the men when they get going. I liked it when the Wallaroos and Black ferns played prior to the Wallaby/AB tests a couple of years, and I took my daughter to the game here in Sydney. She really got into it, and it was great to see her and other women in the crowd really get behind the teams.