The politics of rugby 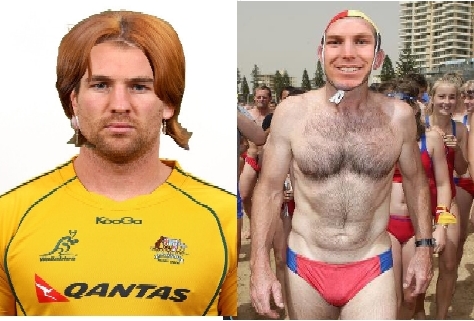 The politics of rugby

Over the last month I have watched both the Wallabies and our politicians with dismay. It seems that certain characteristics and frailties that some of our rugby players have, our politicians also share – and vice versa.

It occurred to me one night the career trajectories of some of the key players in either field of endeavour are strangely similar and the description that could be applied to one of our Wallabies, could just as easily be applied to our MP’s.

Rocky (Julia Gillard) – The captain of the country who is yet to win the hearts and minds of his followers. Came to power by taking over from a wounded leader but has struggled to make an impact at a national level. Even if he gets a big win in the coming weeks, may not serve out a full term if history is any indicator.

David Pocock (Tony Abbott) – A God fearing fitness freak – there seems nothing he cannot do, or at least attempt. Leads through ‘real action’ and is seen by many as the alternate leader of the country but doesn’t appear to have the numbers just yet. Not afraid to get his hands dirty and stand up for what he believes in. A no nonsense, old style leader.

Berrick Barnes (Kevin Rudd) – The golden boy from Qld who had a stellar 2007 but then struggled after he moved south. Was seen as the saviour some years ago but after a disastrous 2010 was moved to the (back) bench. Still has a modicum of popular support but will more than likely head overseas in late 2011.

Gits (Malcolm Turnbull) – The multi-talented millionaire who was trumpeted by many as a future leader of his country. Has struggled balancing his leadership ambitions with performance. Often appears to be on a different page from the rest his team and has trouble including those around him. Has fallen out with key powerbrokers and looks increasingly likely he too will play off the (back) bench.

QC (Bill Shorten) – A behind the scenes negotiator who isn’t afraid to play one side against the other to get the outcome he wants. A talented performer who has yet to prove himself in top company but nonetheless isn’t afraid to put himself forward. A bit of a ladies man who is yet to tackle anything major but clearly in his own mind is destined for greatness.

Dick Brown (Peter Garrett) – Has presided over many failures and been sanctioned on several occasions. Has been largely anonymous in recent weeks and seems to be holding his position because there are no other options. May suffer from an expected re-shuffle in the near future.

Salesi Ma’afu (Joe Hockey) – The gentle giant of the team. It seems as though there is very little that gets him worked up. Gives the air of being competent but collapses when real pressure is brought to bear.

Dean Mumm (Bob Brown) – Plays in a position of power but despite this shows precious little capacity for the cut and thrust – consequently has very little impact. After years of promise, it is time for him to deliver and start having real influence rather than just being on the periphery.

Sharpie (Simon Crean) – Spent many years in the wilderness after being knifed due to internal politics. Back in favour due to a lack of credible alternatives and some solid performances. An experienced campaigner and a solid team man who doesn’t mind the rough-and-tumble.

AAC (Bob Katter) – No one really seems to know what his position is and he is seen largely as a maverick. A player who charts his own course and isn’t bound by the same restraints as others.

Drew Mitchell (Stephen Conroy) – Gives the illusion of talent but more often than not turns in flaky performances. Doesn’t seem to be across the detail of his position and has cost his team dearly with poor decision making on many occasions.

Luke Burgess (Barnaby Joyce) – One of the more agricultural players in the team as his passing skills attest. Was first choice only through injury and is now struggling for relevance. Doesn’t seem to be able to produce when on the big stage.

Bob Dwyer (Mark Latham) – A former leader who is still seeking to impose himself on a world he long since retired from. Shoots from the lip and lets the chips fall where they may. A self styled journo who seems to hate all in equal measure.