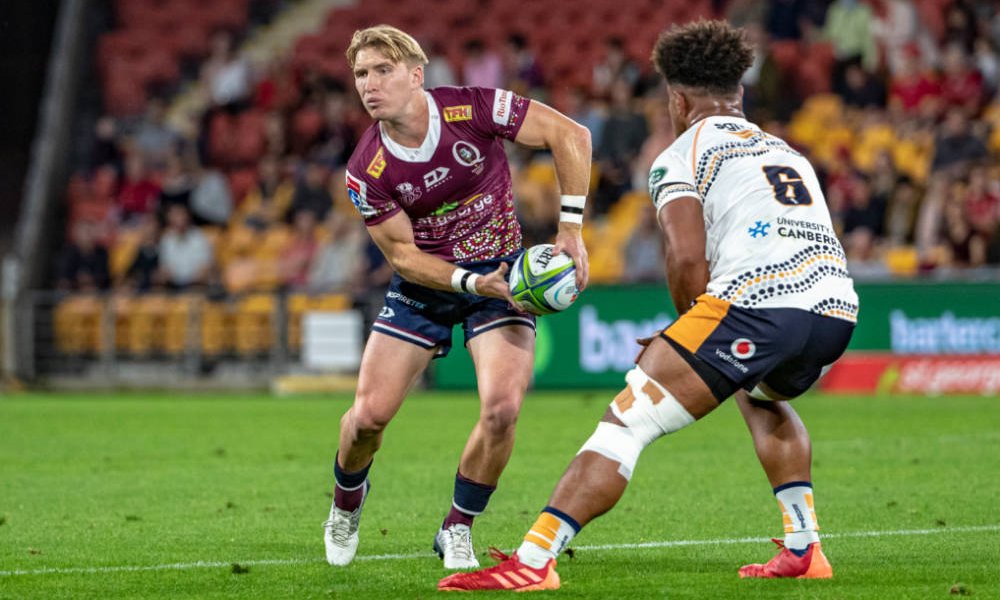 Alright. It’s time to get down to business with the Super Rugby AU final on Saturday night between the competitions first and second place teams – the Brumbies and the Reds.

This week we’ve shaken things up a bit where a writer covering the other team gets to have a say on the final, but with a twist. We’re going to have a look at the opposition and see where the strengths are and what to look out for. I’ve handed the keys over to GAGR’s own King of the North, Reg Roberts, to give his take on Brumbies while I have a look at the Reds and see what to look out for.

Steve’s take on the Reds
The Reds have been to Canberra twice this year and have come away with two losses, but those losses have been by a total of five points and one of those losses came after the bell after Mack Hansen kicked a clutch penalty goal. In both of those games they were in front heading towards the back end of the game only to give up leads so they’ve shown they can play and disrupt the Brumbies flow.

Brad Thorn’s men have been clinical since that blip against the Waratahs including a touch up of the Western Force, the win against the Brumbies two weeks ago and beat the Melbourne Rebels last week to give themselves a bit of momentum heading into the final.

It’s well documented that Thorn can get the best out of a young side and this game is eerily similar to the 2017 NRC final when he brought a young Queensland Country side to Canberra and knocked off the Vikings on their own turf. There are six players from that side in this week’s 23 and would have been seven if Chris Feauai-Sautia was fit to play and it’s clear they won’t be overawed by the occasion.

The Reds backline has been ably led by James O’Connor and with the attacking threats of Filipo Daugunu and Jordan Petaia out wide, the Brumbies will be in for a long night trying to shut them down. But the Brumbies just can’t focus on those two or one of the other options in the backline will step in and cause problems for the defence. Jock Campbell has flown under the radar a bit in comparison, but his involvements have been key in getting the Reds into good scoring opportunities with an elusive running style to beat defenders.

The Reds backrow has also been a key feature of their game in 2020. The three starters named will rightly have a spring in their step after being named in Dave Rennie’s Wallabies squad for later in the year. Liam Wright has been a leader in words and actions and Harry Wilson’s running game has also featured heavily with his 99 carries equal second with Matt Philip and behind his teammate Filipo Daugunu, who also leads a host of categories.

Fraser McReight completes the triple threat and his tournament leading 18 turnovers won will make the Brumbies have to think about their support play in rucks. I wonder if Thorn has had a word about when to pick and choose his moments to attack the ball after a harsh penalty back in August lead to the game deciding penalty and leave the match outcome up to the players and not in the hands of the officials.

Pete Samu v Harry Wilson – With the big omission of Isi Naisarani from the Wallabies squad, it’s out of these two who Dave Rennie will select come October for the Bledisloe. Or maybe they’re both so good that Rennie has to pick them both and play one at six? Either way, both players have the style of game to create problems for the opposition and Samu was one of the best in a beaten side the last time these two played and Wilson’s ball carrying will be crucial for the Reds.

Reg’s take on the Brumbies
The Reds have been on a roll since their flogging at the hands of the Waratahs back in round six. Their run of victories since then has included the Force and Rebels (twice) and this very Brumby team in the last game of the round. What does that mean for this weekend? Absolutely nothing.

The Brumbies are the very definition of clinical. They are a team who has built their game on efficiency. You do not master one of the most difficult group skills in the game, the rolling maul, and not be considered superbly prepared. And it is that preparedness that will see them take out this weekend’s grand finale.

It has always been an inherent trait of Brumby teams. Initiated by the detail-focused Rod Macqueen and carried on by the fastidious Eddie Jones, it remains through coach Dan McKellar and Laurie Fischer and through their experience stars such as Nic White, Allan Alaalatoa, Scott Sio, Tevita Kuridrani and Tom Banks.

It is why you can disregard the loss the last game loss to the Reds because they were inordinately unclinical. That loss, with that performance, followed by the all-important week off are enough to ensure the home team remain firm favourites.

This perfect preparation, including the return of crucial stars, is the opposite of the Reds’ lead in. The physically draining battle against the Rebels on Saturday night together with the emotional challenges of managing injuries to key players – well, it should prove all too much for this young Reds outfit. Particularly on the back of the day trip from hell just to make the game.

Big games are made of big moments and big moments come from big players. This Brumbies team is ‘Andre the Giant’- big.

Taniela Tupou v Scott Sio & James Slipper – No single player has had as bigger an impact on this competition as Taniela Tupou. Sure he’s given away a heap of penalties (15, the same as Scott Sio, in one additional match) but he’s more than made up for that in just about every other aspect of the game. There’s been enough platitudes for his 75th minute break and try assist last week, which came off the back of a powerful 2nd half scrum performance. But what about that first half?

That first half, Rebels loosehead prop Cameron Orr took it to Nella in the scrum and probably had one of his quieter halves elsewhere. Tupou comes into his own in the loose, when he’s dominating in tight. That’s why the dual match up with Scott Sio and ultimately James Slipper will go a long way to dulling the Reds attack structure. If the two experienced Wallabies do nothing else but gain parity, and perhaps a bit more so, at the scrum then the game will be there for the Brumbies on a platter

The Reds had a very physical game last week against the Reds while the Brumbies had the week off to recharge. Dan McKellar has plenty of big names on the bench to come on towards the end of the game that hopefully gets them over the line. Either way, it’s shaping up as a cracker!