Today we examine the so-called “group of death” at the World Cup, Pool C. The Pool is headlined by a resurgent England hungry to avenge their disappointing 2015 campaign, along with World Cup specialists France and a resurgent Argentina. It is rounded out by USA and Tonga, two nations which can blow up the plans of their much-fancied rivals if they are on their game. England comes into the tournament as one of the major contenders for the title, with the side witnessing a resurgence under Aussie Eddie Jones. His influence was immediately shown during their 17-game winning streak in 2016/2017. Whilst the wheels fell off for a brief period in 2018, Jones appears to have England primed for a strong showing at this year’s World Cup.

Through finishing third in their pool at the 2015 World Cup

England finished off 2018 strongly, with wins over Japan, Australia and South Africa followed with a narrow loss to the All Blacks by a point. However, they struggled to meet their lofty expectations in the Six Nations, losing to Wales and blowing a 31 point lead against Scotland to draw the match. The side has since drawn a series with the Welsh, followed by thumping wins over Ireland and Italy. Owen Farrell
Farell has been the spiritual leader of the side throughout their revival and injury to Dylan Hartley will all but ensure his position as the starting flyhalf. Farrell needs to step and guide the side around the park with his kicking game if the English wish to vanquish their demons of 2015.

England should comfortably get through the pool on top if they play as they did against Ireland and Italy. From here, they likely face an uphill battle against Wales/Australia in the quarter-finals. If they can get past this challenge, then the sky’s the limit for this team and they can make a deep run. 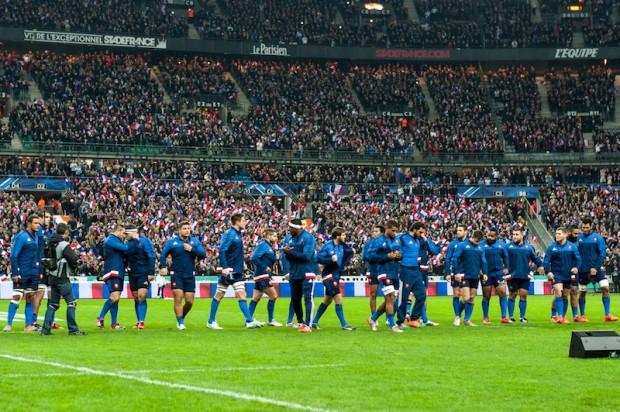 Les Blues will be looking to continue their strong World Cup form, having made the semi-finals in four out of the last five tournaments. Jacques Brunel was rushed into the head coaching role at the end of 2017 and the side initially struggled with the turbulence. However, the French seem to have mastered the art of dégressif (tapering) with a pair of wins over Italy and Scotland boosting hopes of a deep World Cup run.

Through finishing second in their pool at the 2015 World Cup

The French had a lean 2018 with just one win in their six games after the Six Nations, which was against pool rivals Argentina. Since then, Les Blues have been very inconsistent in their performances, with narrow loses over Wales and Ireland mixed in with a thumping by England and two solid wins over Italy and Scotland. In the lead up to the World Cup, they split their series against Scotland 1-1 before a 47-19 hammering of Italy. 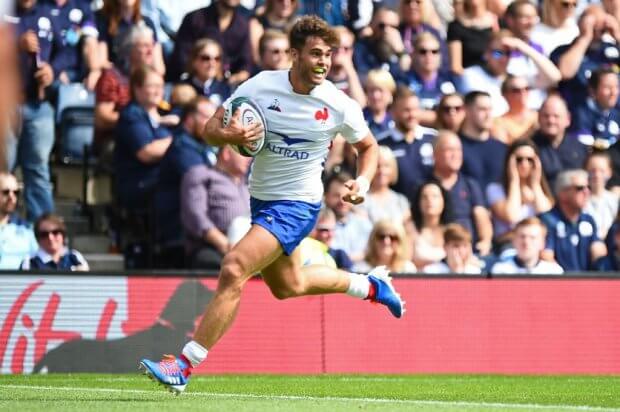 Damian Penaud
Penaud has excelled for club and country since his shift to winger and he enters the tournament as one of the most exciting prospects. Son of former French international Alain Penaud, his combination of power, speed and agility ensures that he can take over a game at any moment. For the French to go far in this tournament, they need to focus their attack around Penaud and give him plenty of early ball.

I think France will be in a real arm-wrestle for second spot in the group, with their opening round clash against Argentina near must-win. I think they will just qualify with a last gasp win over the Pumas but will be outclassed by the likes of Wales/Australia in the quarter-finals. 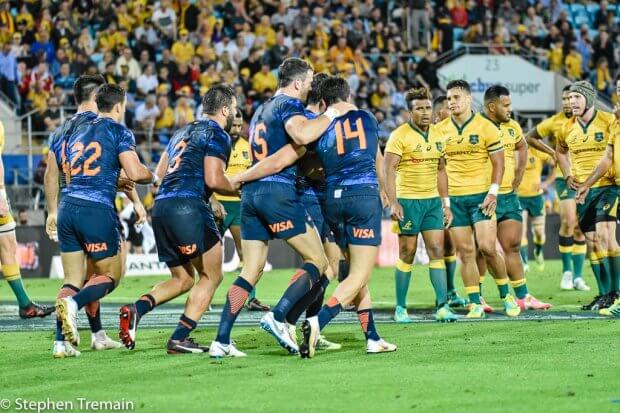 Puma’s celebrate a try, watched by the Wallabies

The Pumas enter this year’s tournament relying heavily on the back of the Jaguares, with 26 of the 31 players named featured in Super Rugby this year. It’s this chemistry that coach Mario Ledesma will help propel them to the knock-out stages. However, they are lacking confidence in terms of closing out games on the international stage, with their last win coming in September last year.

Through finishing second in their pool at the 2015 World Cup

To call their recent form disappointing is an understatement, with the Pumas losing 10 of their last 11 games over the past 18 months. Despite this, six of those losses were by under 12 points, showing that they can hang with the best of them, but struggle to finish off a game when it counts. Their morale and confidence was boosted by a 74-0 victory over Sydney club side Randwick a fortnight ago. 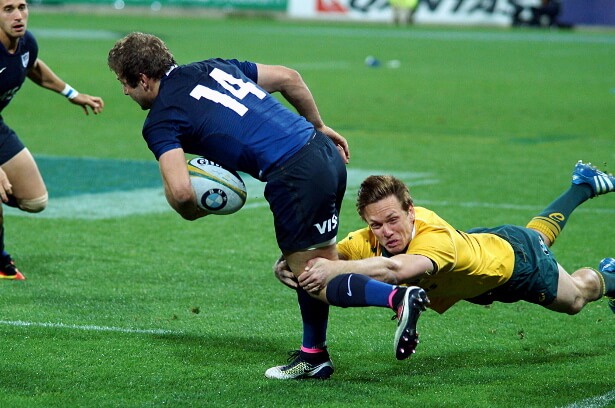 Emiliano Boffelli
Boffelli has made the fullback position his own since debuting for the Pumas in 2017, with his strength under the high ball forcing Ledesma to shift their style of play. I think the best strategy for the Pumas is a trial by high ball and he will be their main target. He also provides a massive boot with the ability to consistently slot penalties from over 50 metres.

On paper, this team looks like that it should really test their northern hemisphere rivals in England and France. However, it’s the lack of execution in tight games that has left me wary of them heading into the tournament. Wouldn’t be surprised if they get back to the quarter-finals, however, I think they will narrowly miss out. The USA Eagles have emerged as one of the most improved teams since the last World Cup thanks to the professionalisation of their local competitions. Strong showings over the past twelve months, especially in the Pacific Nations Cup, have left the Eagles confident of securing a win or two in this tough pool, lead by Welshman Gary Gold.

Defeated Canada 70-44 on aggregate over a two-game series.

The USA is starting to sprout the fruits of having a professional competition over the past 18 months, with the standout performance coming with a 30-29 win over Scotland in 2018. The Eagles opened 2019 with a disappointing Americas Rugby Championship, which saw them drop games to Uruguay and an Argentinan XV. They bounced back in the Pacific Nations Cup with strong wins over Samoa and Canada before a narrow loss against Japan. MacGinty grabbed the rugby worlds attention during their win over Samoa, contributing all 13 points in the victory. The Sale product will be the ring-master for the Eagles heading forward and his steady boot needs to control the game and be the difference if they wish to cause an upset.

I think they will be one of the most surprising teams in this tournament, with the Eagles capable of pushing their much-fancied rivals to the limit if taken lightly. They’ll eye off the clash with Tonga as a must-win and they should have the class to get the result. Tonga is looking to rebound from a disappointing 2015 Rugby World Cup with a better performance in Japan. However, they face an uphill battle in this pool, with their latest run of form less than inspiring. However, the ‘Ikale Tahi’ or the Sea Eagles will bring their usual flair and physicality to the tournament, with Aussie Toutai Kefu looking to impart his wisdom.

By finishing second in the 2017 Pacfic Nations Cup

Tonga looked primed for a strong showing in this tournament 18 months ago, with wins over Fiji and Samoa signalling their intentions. However, they have struggled since, winning just one out of their last seven games, losing to the likes of Georgia, Fiji and Japan. They were humbled in their last performance, losing 92-7 to the All Blacks. Sonatane Takulua
Takulua plies his trade in the English Premiership for Newcastle and the scrum-half will be essential to their World Cup aspirations. He will be the chief playmaker for Ikale Tahi and he will need to be automatic with the boot if the Tongans wish to compete in this group.

I think the Tongans will continue their struggles at the World Cup, having drawn one of the toughest pools possible. They will look at the USA game as a grand final, although I think the Americans will be too strong.