Review: Lions too good for Waratahs

Review: Lions too good for Waratahs

This match had been twelve years in the making and the wait was finally over. The Waratahs were boosted by the return of Dave Dennis and Rob Horne from the Wallabies squad and also the inclusion of Bernard Foley and Matt Lucas from the Sevens squad. 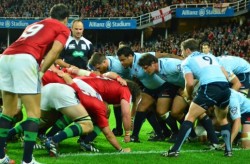 The British and Irish Lions put the Waratahs away with a solid 47-17 win in Sydney. The final score didn’t truly reflect the effort the Waratahs put in against a more experienced side and they can hold their heads high.

The Lions nearly silenced the sold out Allianz stadium crowd within the opening minute when winger Simon Zebo was denied a try after his toe grazed the line as he attempted to score.

They didn’t have to wait too much longer to get on the board with the reliable boot of Leigh Halfpenny knocking over a penalty goal from halfway. 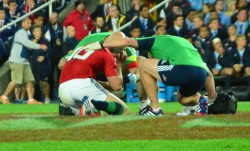 In just the sixth minute the Lions showed their class and punished a Waratahs kick that didn’t find touch with Jonathan Sexton finishing off a brilliant attacking raid to score the opening try.

The Waratahs were on the backfoot early with Drew Mitchell saving another possible try but then scored a spectacular long range try of their own from within their own half.

An ugly kick to the left wing from Bernard Foley found open space and Peter Betham collected the ball and evaded a tackle to pass to Tom Carter in support who ran 30 metres untouched to the line.

Midway through the first half the home side had their best period of play and after turning down a shot at goal, they almost scored their second try of the night but giant lock Will Skelton lost the ball over the line after a move from a lineout. 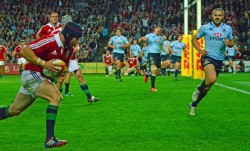 Not even summoning the monkey cloud can stop Halfpenny

The Waratahs looked dangerous when they ran wide with Betham getting his hands on the ball often and with Drew Mitchell chiming in from fullback they looked to cause the Lions problems.

They came close to scoring on one more occasion but were denied by giving away a penalty and then the Lions started to assert dominance through their forwards. With half time approaching, the Lions added another try to Halfpenny after some great work from their pack. 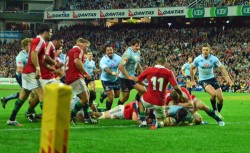 The second half started at a quick pace with a try to each side within the first five minutes.

Halfpenny scored his second of the night and that was followed by Tom Carter also scoring his second after some great lead up work from Skelton.

The momentum then swung the way of the Lions with another penalty goal followed up by a try to Tom Croft after an intercept in the lead-up from Jonathan Davies. That score really put the Waratahs out of reach at 40-17. 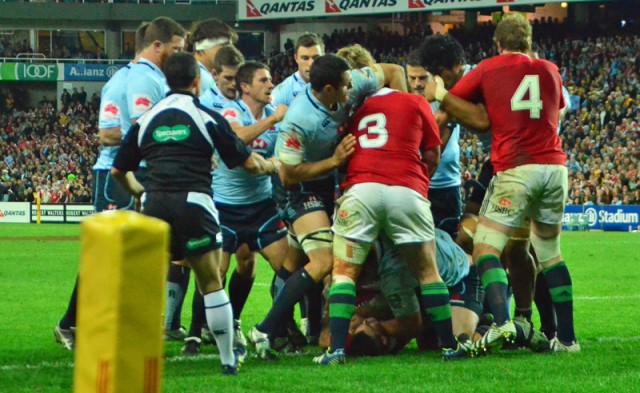 As the game entered the final quarter, the Lions cleared the bench and had the better of the play with their more experienced replacements. The pace of the game dropped and the Lions took control tiring their opposition.

There was one final try to the Lions from Jonathan Davies with less than ten minutes remaining.

With the first test just a week away, the Lions players have given Warren Gatland something to think about especially with Jamie Roberts limping out of the match with a hamstring injury.

Tom Croft’s try in the second half gave the Lions some breathing space.

Leigh Halfpenny. Successful with every shot at goal and also scored two tries. The Wallabies will need to be disciplined or will be punished.

Drew Mitchell showed he still has it with some good runs when given the chance.
Will Skelton showed he can mix it with the big boys and could be in contention if the dreaded injury curse strikes.