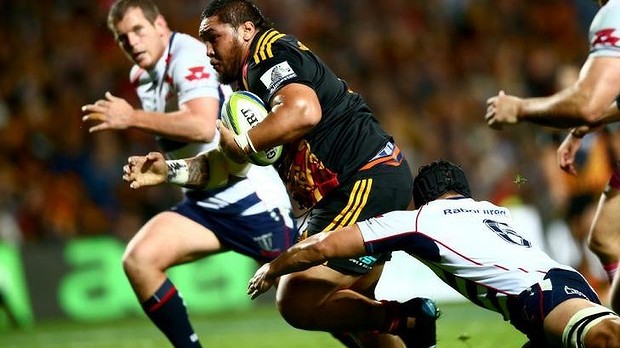 The Chiefs have seen off the Melbourne Rebels 22-16, in another cruel loss for the visitors, at Hamilton on Saturday

The Chiefs were warm favourites to see off the visiting Rebels, despite accusations of a lack of respect following wholesale changes to their starting fifteen. The Rebels had gained a consolation point last week against the Highlanders, but many would argue it was inadequate reward for their equal parts enterprising and frustrating play.

The Chiefs were dominant from the beginning. Despite conceding possession after the kick-off, the hosts won it straight back when they trapped Laurie Weeks in the breakdown. Gareth Anscombe converted the penalty and the Chiefs led 3-0 after 2.

The Rebels were struggling to handle the pressure being piled upon them by the Chiefs, Scott Higginbotham being caught offside twice in succession, and each time was forced to pay for his misdeed, Anscombe extending the Chiefs’ advantage to six, and then nine, after thirteen minutes. The Rebels had not had a substantial run outside their own defensive half, and their forwards were being bullied any time they tried to put up a fight.

Gareth Anscombe was electric, and continued his blistering start with a break through a timid Rebels line, being taken down in the 5m line. Mike Fitzgerald took it from the back of the ruck and smashed it over the goal line for the first try of the match. Anscombe converted from close range and the Chiefs led 16-0 after as many minutes.

The Rebels forwards were struggling to keep pace. Nic Stirzaker couldn’t clear the ball quick enough, often leaving the forwards trapped in the breakdown, and Scott Higginbotham found himself on the wrong side of the referee with continued offside jaunts. He was pinged again at 25 minutes, Anscombe once more converted for a 19-0 lead.

The Rebels crawled slowly into the match, registering their first points after 28 minutes, when Fitzgerald was caught offside. Jason Woodward kicked the penalty to reduce the lead to 16, 19-3 after 28.

The last ten minutes of the half were an improvement for the Rebels, as Luke Burgess came on for Stirzaker. Bryce Hegarty almost went coast to coast with a huge break, but nothing came of it as Augustine Pulu quickly returned possession to the hosts.

The Rebels would take unlikely momentum into the break, catching Brodie Retallick loitering at the breakdown and earning a penalty. Jason Woodward converted, reducing the lead to 13 at half time, the Chiefs up 19-6.

Though it was an inauspicious start to the Rebels, with their first attack ending with a knock-on, they won a following lineout, Tom English making a break to Tamati Ellison, who smashed it into the final 5m, popping it to Shota Horie for his first Super Rugby try. Jason Woodward converted and, amazingly, the Rebels were within a try, 19-13 after 46.

The Rebels defence was improving in kind, and their luck turned when Mackintosh looked to break through to Kerr-Barlow, who gave an easy pass to Bundee Aki for a certain try, only to drop it on the line.

Scott Fuglistaller intercepted the ball and cleared, earning a penalty when Sam Cane wouldn’t clear the ruck. The Rebels earned a lineout on the Chiefs 22. The Rebels forwards attempted to work the ball in, but were caught out when Nanai-Williams stole the ball, passing to Jordan Payne who chipped the ball ahead and recovered, only stopped by an incredible run and recovery from Bryce Hegarty and Tom English.

The Rebels’ momentum was quelled, however, through the ill-discipline of captain Scott Higginbotham, who found himself sent off after a third breakdown infringement. The Chiefs capitalised on the numbers advantage, the Rebels conceding a penalty straight in front that was converted by Anscombe, extending the lead to 22-13 on the hour.

Jason Woodward nailed a penalty to bring the Rebels into bonus point range, 22-16 after 64 minutes, and the visitors continued their late charge towards an unlikely victory. Higginbotham returned from the bin and led the forwards into the Chiefs’ 22. Luke Burgess was controlling proceedings and almost found a gap with ten minutes remaining. Winning a penalty, they chose not to continue the run and handed the ball to Woodward for the kick, the full-back missing his first for the night.

The Rebels were going for the win, and despite penalty after penalty being conceded by the Chiefs, the referee would not give them any quarter. Late in the game the visitors looked to have broken through, with Manu given a yellow card at 76 minutes for collapsing the maul. Despite everything, Higginbotham could not control the tap at the restart, the Chiefs snagged a turnover and secured the win.

Luke Burgess‘ substitution into the game changed the shape of the Rebels’ attack. Nic Stirzaker was far too slow at the breakdown and it affected the ability of the team to respond. When Burgess came on, the entire attitude of the team shifted.

Gareth Anscombe was a terrific inclusion to the Chiefs side. 100% with the boot and an assist to the Chiefs’ try.

Scott Higginbotham‘s discipline was disappointing. For a man touted recently as a future Wallaby captain, to be foolishly sent off when his team needed him most was not befitting a man of his leadership quality.

Reds v Brumbies – What could have been!
Queensland Premier Rugby Round Four