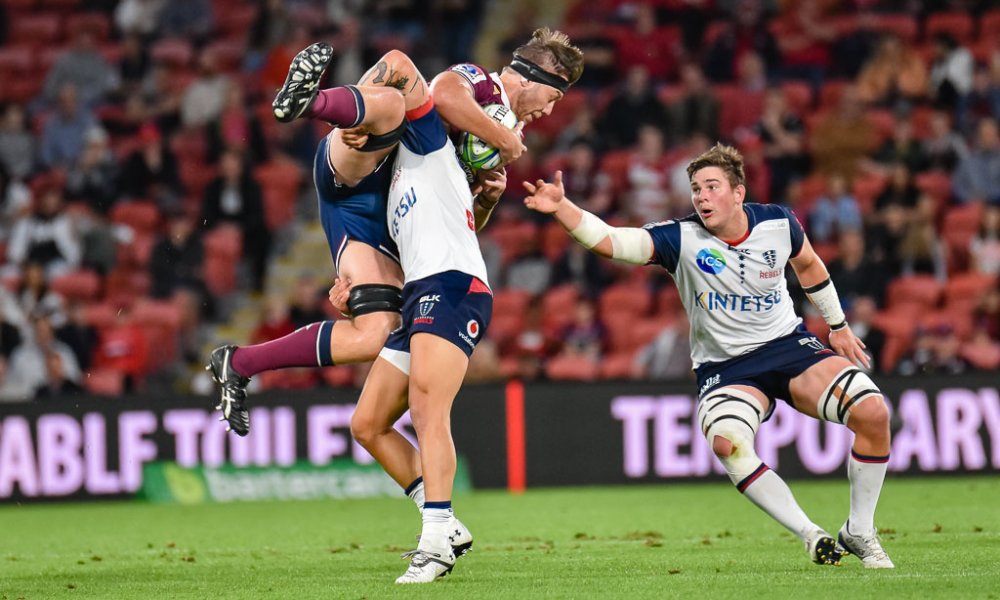 Let’s cut the crap about this being the Rebels first Super Rugby finals appearance, or the Reds’ first since 2015.  This is Super Rugby AU and it has no history.  Now that should not diminish on the significance of this game for either team.

The Rebels are perhaps the team under the most pressure in Australian Rugby considering the resources sunk their way and without too much to really show for it.  The Reds are the up and comers, but is their substance to their play? Can they perform under the pressure of finals footy?

A perfect Brisbane night at a picture-perfect Suncorp Stadium provided the ideal setting to find out.

The match start with the Rebels dominating the early possession but having to survive a barrage of strong Reds defense, led by Chris Feauai-Sautia, Lukhan Salakaia-Loto (playing his 50th game for the Reds) and Harry Wilson who put a massive hit on Isi Naisirani.

Early stages of the match were a mix between the Rebels playing with extreme width, as both Marika Koroibete and Andrew Kellaway received plenty of ball, while the Reds played the more conservative territory game.

It looked like the Rebels would be first to score through a combination of the two, as Matt Toomua found Kellaway out wide with a perfect cross field kick.  Replays showed that it the Rebel wing just put his front foot in touch in goal as he tried to place the ball.  It was centimetres in it but it was enough to deny early points.

The game can be made on these moments and more so on what happens afterwards. For it was from the goal line drop out, and the ensuing Rebels attack, that Jordan Petaia latched on to a Toomua pass and raced away for a Reds try at the other end. Reds 7-0

The pre-game banter around Taniela Tupou by Rebels coach Dave Wessels seemed to do the trick as the visitors drew a scrum penalty which gave Toomua the chance for his team’s first points. Reds 7-3

Petaia was almost in again when Jock Campbell latched on to a beautifully weighted James O’Connor chip.  His balance was superb as he looked to break through. He was grasped metres from the line and a pop pass to Petaia looked to put the young centre over again.  The pass was spilled in hot contest from the Rebels’ defence and the home crowd would be denied.

The battle of the breakdown was living up to expectations as Fraser McReight and Richard Hardwick, in particular, went hard at the breakdown.

When Billy Meakes was far too lazy at the breakdown, failing to roll away, it gave O’Connor a chance to extend his team’s lead with a valuable penalty.  Reds 10-3

Petaia’s night was worryingly over early, only half an hour into the night, with a possible concussion in a tackle.  Hunter Paisami is a very able replacement, but it was a sad sight regardless for Reds fans.

It was followed by a period of manic play from the Reds as they seemed determined to break some sort of offload record.  It was silly stuff and put the team under undue pressure.  It almost paid off for the Rebels when Naisirani charged a clearing kick down and it was only the cruellest of bounces that denied him what seemed to be a certain try.

The hits kept coming for the home team with Feauai-Sautia also replaced through injury, leading to reserve scrumhalf Moses Sorovi taking the field to play wing.

Just when it felt like the home team would safely find their way to the sheds, just like last week against the Brumbies, they found themselves conceding a soft try.  Koroibete, always roaming, picked up the ball from the base of the ruck and was off for the try line before any Reds player or fan could catch a breath. 10-all.

It was a crucial try and, given injuries to key Reds backs, and the Rebels being desperately unlucky to miss another two tries, the visitors would enter the break with plenty of confidence. 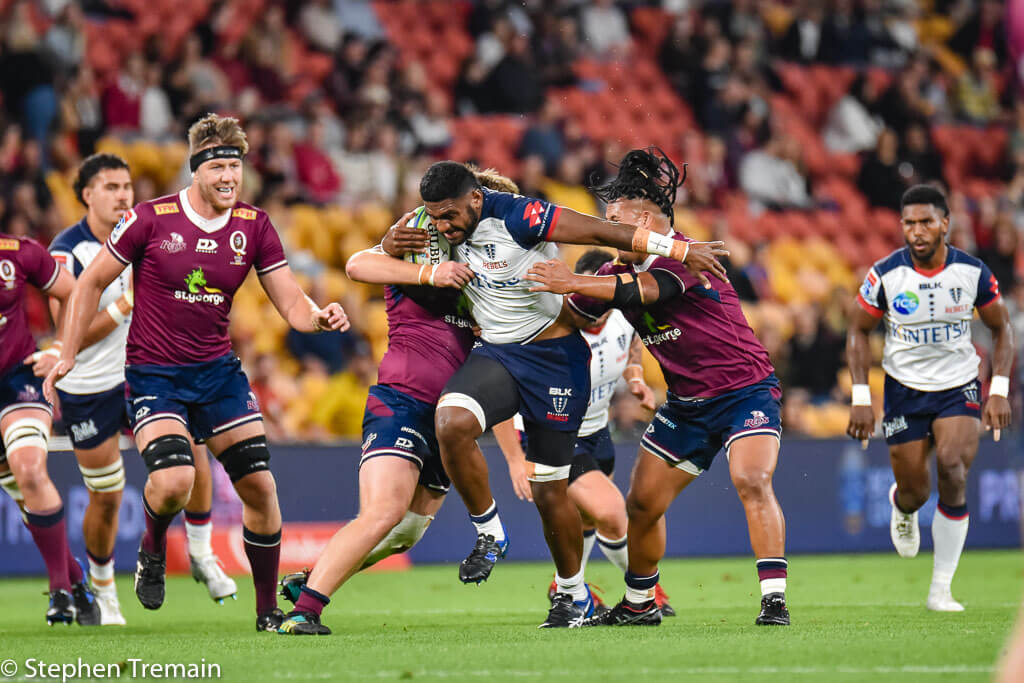 The injuries kept coming at the start of the 2nd half, but it must have been something to do with the Caxton Street end of the stadium. This time it was captain Dane Haylett-Petty who went down and he was replaced by Campbell Magnay, resulting in Reece Hodge shifting to fullback.

The result was immediate as Paisami found space down the blindside before linking with Filipo Daugunu who held up the pass Salakaia-Loto to score the try in his 50th game.  Reds 17-10

Matt Toomua was the next big name to drop limping off with half an hour left on the clock.  It was a staggering set of injuries that must have had Wallaby coach Dave Rennie wishing it was a first passed the post title series.

With Toomua going off, Hodge took the opportunity to polish off his kicking boots and blasted a 40m effort to close the gap on the scoreboard. Reds 17-13

The scrum battle was as intriguing as ever and evolved as the game progressed.  The Rebels had the ascendancy in the first half, but the Reds’ dominance was clear throughout the 2nd half.  A powerful Tupou led shove, presented O’Connor another penalty shot at goal. He got it.  Just.  Reds 20-13.

Once again, the Rebels had a try disallowed, but this time it was more their own fault.  After a powerful Naisirani charge through the heart of the Reds’ defence, the Rebels were hard on the Reds line. They looked to find the space out wide to put Koroiebete away but Meakes’ pass went forward and the opportunity was lost.

The injury rate continued to grow faster than the score.  Jordan Uelese was next down and then Hamish Stewart.  Each team was hobbling it’s way to full time with the Reds’ backline looking particularly patchwork.

The home team obviously decided it was time to take the backs, and the clock, out of the equation. The Reds began to use their scrum pretty much solely to draw penalties. It had the duplicate benefit of taking important seconds off the clock and giving their team easy metres.

It was on the back of such a play that the Reds were finally able to seal the deal.  Fresh off the back of a powerful scrum, and 75 minutes into the game, Taniela Tupou ran on to a marginal Bryce Hegarty inside ball.  Nella had multiple options including steamrolling over the top, but he drew the tackler and set Daugunu over for a deserved try.  Reds 25-13

It was the nail in the coffin for a committed Rebels team and would propel the Reds into the Grand Final next week in Canberra.  Whether they’d have 23 fit players would be a question to be answered another day. 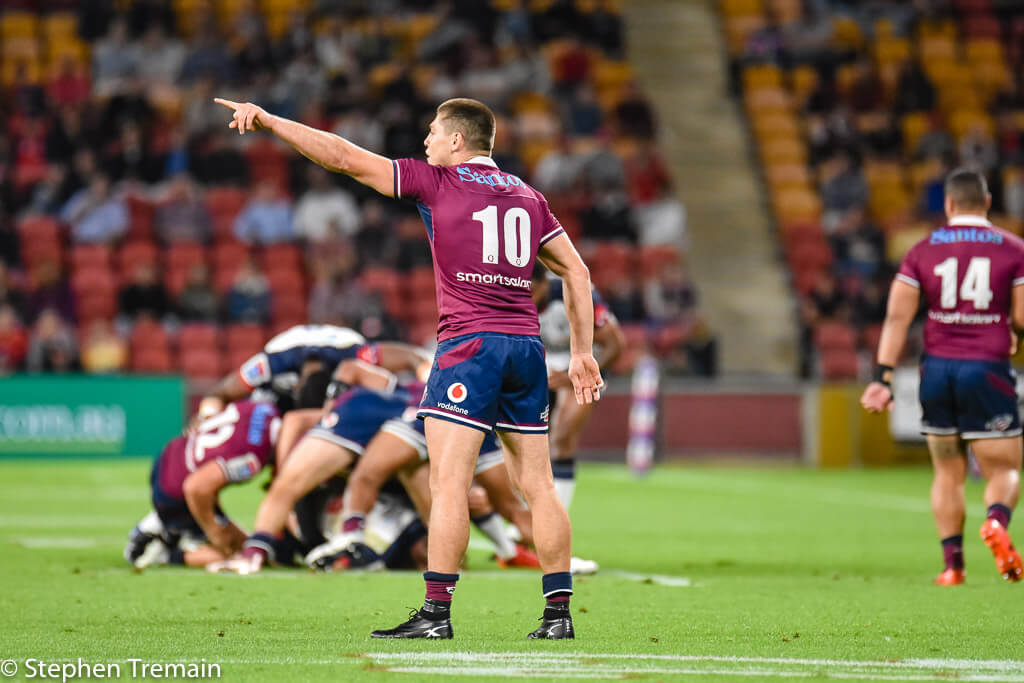 While every injury to every key player had an impact, with perhaps Toomua’s the most significant, it was only Daugunu’s try with five to go that confirmed the result.

I’ll give this one to Filipo Daugunu.  It’s rare for a winger to snag a MOM award, and even more so when it was probably more for his defensive effort. Two key turnovers and some massive hits were big moments, with the try the icing on the cake.

Well, how many Wallabies are fit?  Koroiebete, Naisirani and Hardwick were excellent for the Rebels, while Stewart was very close to player of the match and must have got Rennie’s pencil working.  Kudos must go to the hookers too, who didn’t miss a lineout throw all match. 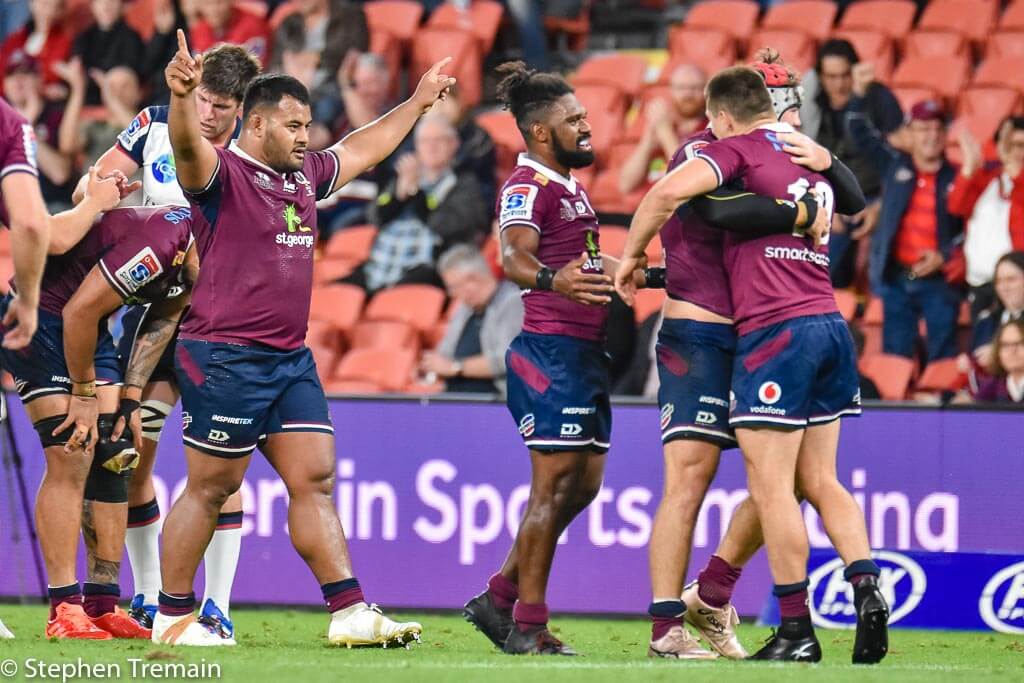