Five observations from the Barbarian match 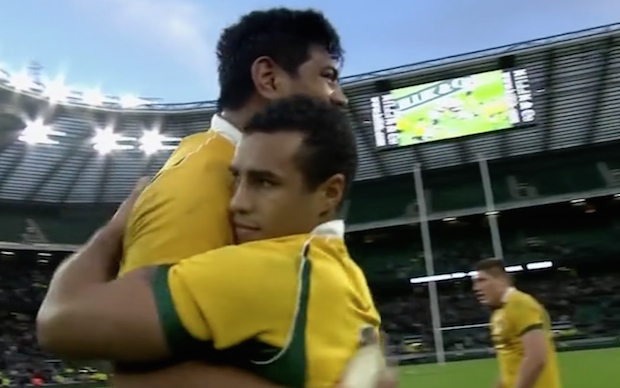 Five observations from the Barbarian match

Looking at his first match in charge, what has the match against the Barbarians told us about the ‘new’ Wallabies under Michael Cheika?

It appears that the rush up umbrella defence is gone – finally. The Wallaby defence this year has featured the 13 position rushing up to cut off the wide ball option and forcing the opposition to turn it back inside to the scavenging forwards. Not a bad ploy if it works and the Wallabies got some good results against France with it. It has also featured the outside wing playing fairly narrow to cover the 13 in case he misses his man.

The big problems come when the inside runners beat the inside defence or worse the opposition is skilful enough to outflank the 13 with hands or passing. It leaves the wing exposed and nobody selected in the Wallaby back three is all that fast at the top-end past 20 metres. Have a look at how much ground was conceded by the Wallabies in the Rugby Championship in this way.

The new structure is more of a flat line. Against the Barbarians it was a bit passive for my liking, but that will improve as will the tackle execution and percentages of a few players under the tutelage of Grey.

One of my pets hates which readers of the Forum will have noted has been the Wallabies scrum setup system. Previously the Wallabies locks and Flankers knelt to bind and position correctly on the front row. That is great.

The silly part was the 8 dragging the second rowers up but the shorts on the bind command. The second rowers invariably ended up with their hips above their shoulders. The lines of force are pretty simple to follow after that. The poor old Wallaby front rowers were then up against it with an effectively de-powered second row. I would like to add against the Argentines the second rowers were not held tight by the 8 and their hips came apart too often, leaving the 8 nothing to push on and driving different angles on the props and hooker.

One point about selection – surely Alexander has to be on his last legs as a Test prop. It beggars belief that no scrum coach in Australia has taken him aside and corrected his binding AND the positioning of his feet. A combination of these two factors make nearly every scrum that he packs a certainty to collapse. He is a talented player and it is a failure of coaching that these problems have not been rectified, much like the binding issues of Le Fuse.

Much debate and some quite heated has surrounded the effectiveness and assessment of the scrum half play we saw on the weekend. I have watched the game three times and tonight was watching some very old games from the 90s. The thing that stands out in the attacking play of the early 90s is the speed of the ball clearance from every breakdown. Not one or two but nearly every single one, AND this was when killing the ball at the ruck resulted in a scrum (and a few tags on your back).

In the late 90s with the Macqueen game of endless recycle the speed of the ball became variable and was dependant on setting up the next recycle phase. That second just doesn’t cut it anymore because the opposition will either fan out in defence and endless recycle isn’t really an option (as the Macqueen game was killing the contest more often than not) or counter ruck and turn it over – and lets not forget the 5 second rule of using the presented ball.

The speed of the ball from the breakdown is now crucial. This is where White was far better than Genia. Genia’s passes were more measured and accurate, but they were slow. Yes he directly set up two tries, but he conceded the ball either at the ruck, or got tackled with the ball or pressured the receiver with a slow clearance. I have no doubt that he can be brought up to speed, but it will require fitness he just doesn’t have after the long injury lay off.

I see Bob Dwyer has put up his desire to see TK moved to 12 again, to the vociferous and somewhat heated comments of some posters. I really don’t have an issue with it as it would see a return to the most successful type of centre pairing Australia has fielded. Two running centres, not necessarily bosh merchants but skilful running centres with pace and footwork off the mark. Think Horan/Little, Horan/Herbert, Lynagh/Burke (1st).

Long time readers of GAGR will remember the discussion piece published last year on the idea of dual playmakers and the fact I have never liked the idea. A great Rugby side has balance in its skill sets and each position has a role to play. The second “playmaker” doesn’t have to be 12. Just somebody who can step up when the 10 isn’t in position for whatever reason to take the ball.

Campo used to come in off the wing to cover Lynagh and scored the first try in the 91 RWC from 10 when Lynagh was buried in the preceding ruck. The problem for the current side is the back three. Currently there are no back three players with the vision or passing skills to play a stand in role. This may be fixed when JOC makes his “expected” return in 2015 (or dare I say it……. Beale). Both could fill the role from the wing and allow the two running centre model.

In the mean time I think both Toomua and Lilo are filling the role capably with perhaps Lilo shading Toomua as a runner of the ball. They are the closest to the runner and distributor type player in the Australian game. Until that stand-in 10 skill set is covered somewhere in the back three I don’t see a possibility for Godwin at 12 or a move in for TK.

Apparently can’t play 80 minutes, has too low a workrate, etc etc. This is yet another area of great debate on the forums. Here it is purely about balancing skill sets for the set pieces so that there are adequate jumpers in the lineout out and Skelton is in my opinion best used at either 1 or the tail of the lineout as a non-jumping receiver. FFS the bloke is 6’8”  – a short ball at one isn’t usually a jumping option in any event.

At the scrum I’m not sure if he should be positioned at tight head lock. His binding is too high on the props, but then lets refer back to discussion point 2 above. Away from the set pieces Skelton provides options, the sort of options that Deans was hunting for in selecting Timani – just without the problems of Timani’s shocking hands and propensity of surrendering in the tackle.

Skelton is also single handedly the biggest menace to any opposition maul; I have lost count of the number of times this year I have seen him break up or turnover an opposition maul.

The key to his selection is in balancing the skill sets of the forwards, just as it is with any other selection. It isn’t just about looking at who are the best 15 players in Australia, its about balancing and creating a team which is greater than the sum of the individuals. As an example from the All Blacks I would say the next best seven in New Zealand is not Sam Cane, but rather Matt Todd. However anybody who has watched Sam Cane in the ABs will note that his skill set more closely matches McCaw and continues the balance of the back row.

What else did you see?