This was one of the games this round that will have plenty of bearing on the shape of the finals series in 2012. The simple fact: the loser could start thinking about their end-of-season activities, the winner was still in with a chance.

The Reds were back at Lang Park for the first time in seven weeks, and they were playing in a commemorative jersey to boot. After a traditional Aboriginal welcoming to the teams, the game was ready to go.

The Highlanders were on the attack early, and after several penalties at scrum time, it was clear the Reds were struggling. Kaplan eventually let the ball play even though the scrum had gone down. The Highlanders strung a few phases together before another penalty was awarded and they took the points.

The Reds hit back very shortly after with a Mike Harris penalty. It was clear Kaplan had his whistle and he wasn’t afraid to use it.

Scott Higginbotham then scored a try for the fans, because it wasn’t one for the scoreboard. Quade Cooper chased a kick from an offside position and toed the ball back infield for Higgers to seize and carry over the line. It will look good in the highlight reels, even if it didn’t count.

The Highlanders were at their breakdown best, requiring the Reds to commit plenty to the breakdown. In the first 25 minutes the accuracy was missing, causing the home team plenty of issues in both the penalty count and their continuity in attack.

Despite this, the Reds were taking points every time they were down in the opposition half. The other promising thing was the way Quade was running the attack. One great example of that was the move that saw Chris F’Sautia do his hammy. With plenty of runners providing options Quade hit F’Sautia, who was using his pace to great advantage before his leg gave way.

This incident brought 50-capper Ben Lucas onto the field to take over as fullback, with Luke Morahan going to the wing.

A drop-goal attempt from Mike Harris went horribly pear-shaped so no points were added and the teams went to oranges with the Reds leading 6-3.

A couple of replacements were made at the resumption, with Radike Samo and Ben Daley subbing for Beau Robinson and Greg Holmes respectively.

The Reds started to find their groove, and again they found themselves deep in the Highlanders’ half with the pressure mounting. Again they were rewarded with a penalty at the ruck. Genia was obviously aware of how important the win was and opted for the shot at goal. Mike Harris put it over.

It was just after that that Mike’s flatmate Rob Simmons left the field with a knock to the knee. This saw Easts Tiger Jarred Butler make his Super Rugby debut. 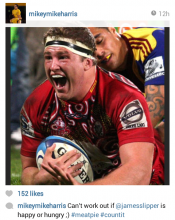 Scoring a pie or just about to eat one?

Another trip into the Highlanders’ 22 followed, and another penalty attempt by Harris. This time he made a rare miss. All these trips down into enemy territory and no tries to show for it… something had to be done. Naturally it was a typically graceful front-rower on the end of the move to get the job done. Harris added the extras.

The Highlanders realised their season was slipping away and almost from the restart (a constant bugbear of mine, how poor Australian teams are at this area) collected the ball and worked their way down the field. A scrum penalty to the Highlanders was taken as another scrum, the ball was taken off the back by the number 8 and one phase later Adam Thompson was over for the visitors’ first try. The conversion attempt was missed by Delaney.

The Reds ventured down into the Highlanders’ 22 again ,and again they left with three points, Mike Harris converting a penalty for offside. Given this match was virtually finals football, they are making good habit of not leaving the opposition’s quarter without taking some points. It is in this regard that Harris is such an asset.

The Highlanders weren’t out of it yet, though. An attacking penalty six metres out gave them great ball, their forwards used the pick-and-drive to perfection and despite the Reds’ committed defence they got Chris King low and drove across the line. Noakes was unable to make the conversion.

Despite being well behind on the penalty count the Reds were able to make theirs count on the scoreboard, overcoming the two-to-one try count. They finished six points clear, 19–13… making Sully’s ‘Reds by 5!’ prediction look pretty good.

This means of course that the big match next weekend will be a great chance to continue the winning run and set up a title-defence finals campaign. As Will Genia said in the post-match interview, it is make or break, no hiding from that. The Reds will be drawing heavily on last year for inspiration.

Whom will you be cheering for tonight in the Waratahs versus Brumbies match?

Preview: Lions v. Rebels – ‘Activity Participated In By Some’
A Tale of Two Seasons: Brumbies Edge Tahs in Tight One