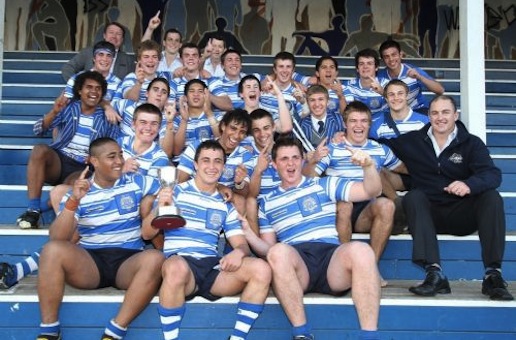 After what has been the longest off-season in recent memory due to the change in GPS schedule for 2012, Term 3 is upon us. That means that finally, it’s GPS Rugby time.

The biggest and best schools in the state will battle it out for the crown of GPS Champions, commencing this Saturday, the 21st of July. So, who will be the contenders for the title? Who will fill the pack chasing them? Who will have a year to forget? Let’s find out.

Anglican Church Grammar School – The men in blue and grey (a.k.a. ‘Churchie’) are in the middle of their centenary year and it has shown. They’re rumoured to have had the largest recruiting push of all the schools this year as everyone knows that winning a premiership in the 100th year would mean that much more to the Old Boys of Anglican Church Grammar School. The likes of Michael Gunn, Lochey Oppenheimer, Vincent Quigley, Nigel Tanuvasa, Darcy Eason and Monty Ioane will be leading the charge for glory in this all-important year for Churchie.

Pros – Successfully attracting plenty of stars for the side, huge firepower in the backline.

Cons – Have been rusty in performances so far, don’t look as though they are playing as a team just yet. If Oppenheimer isn’t 100% they will struggle for depth at Number 8.

Prediction – Hard to see them finishing outside the top two spots. Will depend on whether or not the backline can click from the word go. Round 2 versus Nudgee at home in front of an enormous crowd will show whether these boys are premiership material.

Nudgee College – Yet again up there with the premiership favourites as they show why, year after year, Nudgee is regarded as one of the best schoolboy rugby programmes in the country. Not as many stars as they have had in previous years but they do have the best player in the competition in Jack Tuttle. Dylan Sikimeti, Francois Postale, and Graeme Wessels in the front row will dominate the scrums all year and will be very tough to beat up front.

Pros – The 10 and 12 combination of Paddy James and Jack Tuttle is an almost telepathic one, with one always knowing where the other is on the field. Have the best set-piece in the competition and will dominate most forward packs.

Cons – The back three aren’t as dominant as in previous years and at times have lacked the quality to finish, which has let some half-chances go begging. Sikimeti reported to be under an injury cloud after last weekend’s trial against Gregory Terrace.

Prediction – Plenty of big-game experience at Nudgee and they know how to get the win on the board. Could easily be on top of the table come season end.

The Southport School – Not much hype behind TSS for 2012 but they look to be as strong as ever, with a few outstanding players leading the pack. Defeated Churchie a few weeks ago in a trial match and look as though they could sneak under the radar and go the distance this year. Ben Tarr, Mitch Third and Nili Fielea all represented Queensland at the Australian Championships and lead the side around the park extremely well.

Pros – Not talked about much, a lot of teams will underrate them and regret it after the full-time siren. Have one of the more deadly 10, 12 and 13 combinations with Third, Cooney and Fielea.

Cons – Forward pack has struggled against the big guns and will have to stand up against Nudgee in particular if they are any chance of grabbing the crown.

Prediction – May just fall short to the two schools mentioned above, lacking firepower in the forward pack.

Middle of the Pack

Gregory Terrace – After the dismal performances of the 2011 1st XV side, Terrace has made a big effort to get better results this year with a few new faces arriving at the college as well as a new and improved rugby program. James Dalgleish looks to be the best 10 in the competition and has shown touches of real class in every game he has played this year. Looked to be a well-drilled side with a focus on getting the points as soon as a penalty is given within the opposition 40. Playing to win, not to entertain.

Pros – Have some real tough, big, hard-working forwards that go generally unnoticed by many. Dalgleish is arguably the best 10 in the state and guides the team very well around the park.

Cons – Lack any size whatsoever in the backline and could be run over by some of the big, fast centres from other schools. The loss of Tom Given leaves them struggling for creativity if Dalgleish has an off day.

Prediction – Will be a much improved side in comparison to last year but will struggle against the top sides. Hard to see them finishing any higher than 5th.

Brisbane Boys College – College has been kicking and screaming for some approval from the other sides this year after a few quiet years now. Have recruited well and have an enormous forward pack to show for this. Junior Fakaosilea must be terrifying to play against and will carve some of the lesser teams up.

Pros – Probably the biggest pack in the competition including two great players in Hood and Fakaosilea and feature some quality outside backs on top of this in Conrad Quick, Gareth Kalell and Tom Banks.

Cons – Forward pack tends to fade towards the end of the game and this could prove very costly in tight games. Kalell, Banks and Braeden Hood all under injury clouds which could really push the depth at BBC.

Prediction – Lack some physical conditioning that will hurt them at the end of games, will finish 4th or 5th but have the potential to make a run for the title if they can pull it all together. (That is a very large ‘if’.)

Brisbane Grammar School – Have been talked up as a much-improved side that could challenge for the title but have not shown enough so far this year to prove that they can be considered a top 5 side. Have two of the best players in the competition in Jack Cornelson and Sam Greene. They will help get this side over the line against the bottom half of the competition. Greene has one of the best kicks in the comp and could in the end be the difference between winning and losing in a few games this year.

Pros – Cornelson gets through a fair bit of work and is the number one man in the lineout alongside GPS 3 hooker Cody Blackhurst. The boot of Greene is simply outstanding.

Cons – Other than the three players mentioned above, struggle to show that they have the players to really push for the title.

Prediction – Will struggle against most schools but will get over the line in a few close encounters. 5th or 6th a realistic goal.

Ipswich Grammar School – As per previous years, some huge boys from Ipswich Grammar School will be lining up for battle in 2012. The best schoolboy prop in the country, Aaron Pleash, will terrorise inside backs all year with some barging runs and demolish some of the weaker scrums in the GPS competition. Pleash, Latham Takau and Dan Preen will be hard to stop from in-close.

Pros – Huge forwards that get over the gain line time and time again; Pleash is a nightmare for opposing sides and has a big future.

Cons – Backline really lacks any firepower and this could really hurt them.

Prediction – Should get it done up front against a few sides but the backline will have to improve greatly for them to be any chance of knocking off the anyone of note. Have potential to finish in the top 5 or 6 sides but could just as easily end up with the wooden spoon for 2012.

Brisbane State High School – The glory days of State High appear to be over for a few years as they have not looked half the side that they have been in the last four or five years. Really lacking any star-power at all with Korcyzc the only shining light.

Pros – Not too much to report here, although they did upset a severely under strength BBC on the weekend. Adam Korcyzc is a great player but is really lacking support around him. Have shown that they really stick together as a team.

Cons – Missing the stars of previous years such as Paul Alo-Emile, Chris F’Sautia and Curtis Browning that destroyed opposing teams and put them in to contention on sheer individual brilliance.

Prediction – May cause an upset or two but will really struggle this year.

Toowoomba Grammar School – Toowoomba Grammar School could be anything this year and with the largest representation in the Queensland Schoolboys side out of all the schools in Queensland, it would be stupid to ignore them. Featuring an extremely strong backline that includes Australian fullback Jonah Placid, the boys from up the range may in fact be tougher than a lot of schools are giving them credit for.

Pros – The backline has some fantastic firepower with a supreme leader in Adam Deck, strong runs and big defence from Blaise Hartley and the extra spark that every team needs in the form of Placid. Also have Stuart Bougoure at 7 who really does go all day and can be a nightmare at the breakdown if special attention is not paid towards disrupting his game.

Cons – Similar to Churchie, the issue is whether or not these boys can click by the time Round 1 rolls around this Saturday. Lack a front row that can match it with the big guns, seem to struggle at set-piece time.

Prediction – This weekend is a huge game for TGS: if they can beat Churchie in Toowoomba, others are going to stand up and take notice. Will finish in the top 3 or 4 if they can put all the pieces together.

The 2012 season is going to be very tightly contested, and the majority of the teams could easily be interchangeable from 3rd through to 9th. At the conclusion of the term, some schools will be counting their lucky stars and others will be dreaming about what could have been. Unfortunately, there are no second chances for those boys in their final year. Bring on Round 1.