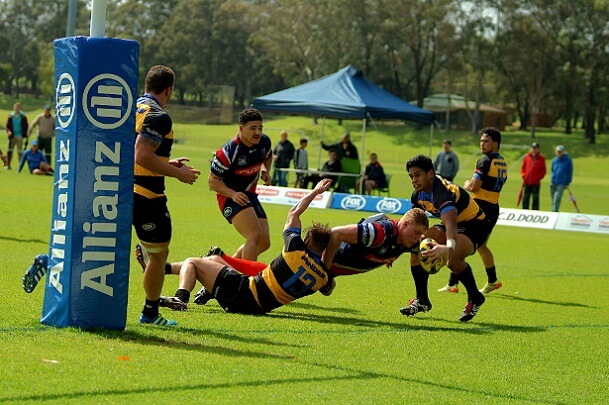 Perth Spirit took on the Melbourne Rising in the opening game of the 2016 Buildcorp NRC team this morning. Here’s our report.

The set up at the UWA fields this morning was fantastic. The main field had been cordoned off as local junior finals were happening around it. The two teams had there warm-ups on the main field and excitement was building.

Moments before the teams made their way down the hill to get the 2016 NRC competition under way, a huge cloud opened and a quick down pour occurred as if to give it all one final wash before the kick off.

A good crowd considering the weather, and a brilliant initiative to make entry to the games free for all rugby fans, and thereby making it easy to bring along a couple non-rugby playing friends and family to enjoy the day out as well.

Melbourne Rising came down the hill first, followed by the Perth Spirit, who had the Junior Spirit Captain, Kaea Taunoa from Perth Bayswater, up front with Jono Lance taking the players onto the field.

The storms that threatened to drown any crowd enjoyment backed away and play got started.

A perfect game to start the NRC, good solid rugby, with both sides being equally involved in making for an enjoyable fan spectacle. The Perth Spirit coming out eventual winners 20-16 over the Melbourne Rising

For the first passage of play lasting about 5mins the Spirit kept the Rising in their half piling on early pressure, both intense defense and moving the ball about attacking from all channels. This resulted in a try to Onehunga Havili in the left hand corner. Conversion no good 6-0 to the Spirit. 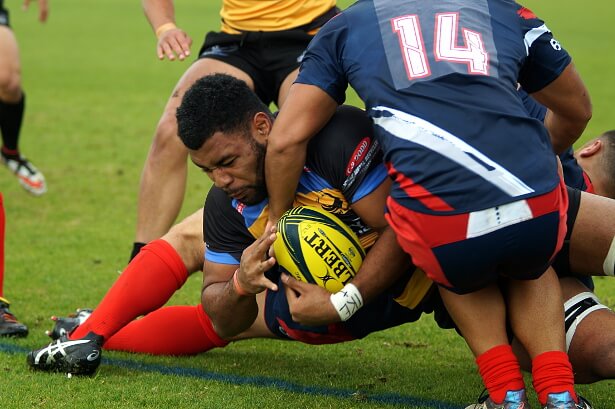 The Rising played deeper off the line as if having a look at what was in front of them to work out a way through the Spirit defensive line that raised its intensity and laid in some big hits through the rest of the match. Jono Lance seemed intent on reminding selectors at the Wallaby camp that had he hadn’t been injured for much of the Super season he is also an option at 10.

Poor handling and a couple forward passes didn’t help the Rising’s cause, that being said, the Spirit held their line fantastically when pinned down that end of the field.

A good amount of rugby was being played with teams defending and attacking in quick rebounds, actively playing what was in front of them, reacting accordingly and for the most part all players making the correct decisions repeatedly. Billy Meakes the new Force signing a stand out in the first half crunching anything that came near him and distributing well when on attack.

The Rising scrum got early ascendancy over the Property Powerhouse Perth Spirit, but the Spirit showing solid line out ability. The general head nodding and crowd murmuring to each was that this was solid game of rugby with no outright leader at this stage heading into the closing parts of the first half, although the Spirit led on the score board 6-0.

Melbourne Rising creating a slight overlap down their right wing side of the field at about the attacking 10m line, spread in through the hands and what looked like a tangle and resulting trip of the defensive cover let the Rising advance up to the Spirit 5m and 2 quick phases later a try next to the poles. Duly converted and 8-6 to the Rising with a minute left in the half.

Half time, and while the teams were smashing the oranges, an air cannon was shooting Spirit merchandise into crowd which got everyone of the approximately 600 people that braved the potential storms, up on their feet and enjoying the morning further.

The second half started with more of the same, good rugby with the occasional pass being flat enough to have the crowd offering assistance to the officials. Nicely planned out by all involved to test if everyone was paying attention.

In what seemed the wrong option by the Spirit around the 8 minute mark, the ball came right to a front rower who may have been Shambeckler Vui to a 2 on 5 underlap (which may be the first time this phrase has been used in “attacking” rugby). Shambeckler engaged enough of the defense and still managed to get the ball out to Luke Morahan, who threaded a needle for 8 steps holding his balance rushed down the side line to score the first of his double. Conversion unsuccessful 12-8 Spirit.

Play continued with the Rising pushing their way forward only to be stopped in what was the hit of the match by Brynard Stander, who had the whole crowd drawing in air simultaneously in a huge collective gasp, which may have absorbed all the air out of the tackled player’s lungs as he stayed down for a good long while.

The game started to open up after this and for a couple minutes threatened to get a touch scrappy, but both teams refocused and got it happening again.

Luke Morahan looked to be gone for all money after an intercept just outside the Spirit 22m, but was called back for an infringement from the early phase. Penalty was given to the Rising, Jack Debreczini put the ball out for a 5m lineout, and the Rising forwards gathered at the top and scored a quick mauling try and with conversion awarded, 16-12 to the Rising. 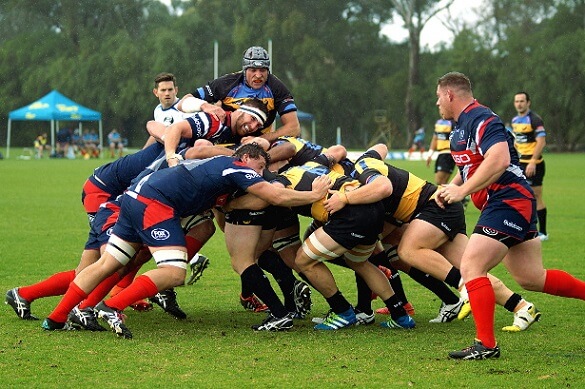 Play continued and both teams opened up further, the ball was being allowed to move a lot more, through the hands and off the boot. With some huge kicks by Debreczini  gaining good field position.

With a little under 15mins left on the clock the Spirit moved the ball up field which led to the second of Luke Morahan’s brace, with conversion successful and what would be the final score 20-16 to the Spirit.

It needs to be repeated, that the opening game of the 2016 NRC was a good, fun game of rugby with no villains, no carding requirements, no silly buggers, the ball saw plenty of movement, some wonderfully audible tackles, and good running rugby. Everything that you’d want in a game. Great contest.

The scores could been a little higher with a held up try against the Spirit and the Rebels butchering a certain try with a fumble near the line. The final score was a good reflection of the game.

Watching the game closely to pick stand outs from both sides, mostly the Rising rumbled together as a team with good ball movement and a good bundle-tackling set up.

As a tight 5, Rising took the scrum honours, and line outs being fairly even if only ever so slightly favouring the Spirit after one of the Rising’s attacking lineouts was called a wide.

The Spirit players largely took the individual honours, with both the Spirit scrumhalves out playing their respective direct opponents during the course of the game. With the replacement flanker, in the second half, for the Rising Ikapote Tupai (20) being quite visible taking to ball up hard and fast, but it could also be the bright white head gear that he was wearing. 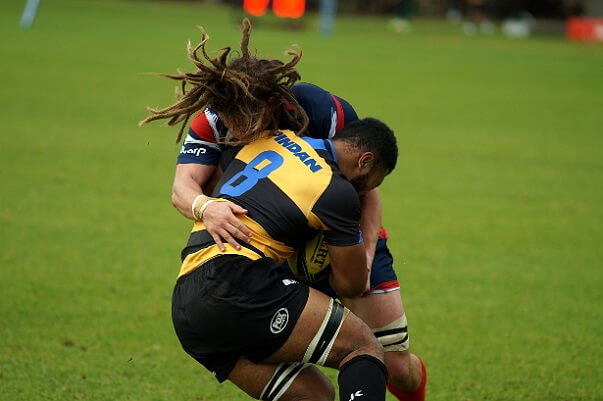 Jordy Reid, one of the best for the Rising, tackles Onehunga Havilli. (Photo credit: Delphy)

There wasn’t one moment that swung the entire game in either teams direction, however the Spirit’s scrum improved in the 2nd half when the reserve props came on, and that stopped some of the Rising momentum at the set piece. In the end though it was only Morahan’s late try that secured the win.

Jordy Reid was fantastic for the Rising, but the award goes to Jono Lance who took the ball to line, distributed smoothly, tackled superbly. A solid reminder to any Wallaby selectors reading this.

For the Spirit the big No 8, Onehunga Havilli, had shades of Radike Samo in him and Eric Vasukicakau had some moments on the wing, while fullback Manihera Eden was always dangerous from the back. Rising winger Ah-Mu Tuimalealiifano had his moments of magic,  Ikapote Tupai was strong from the bench and big Lloyd Johansson did the hit of the match late in the game.