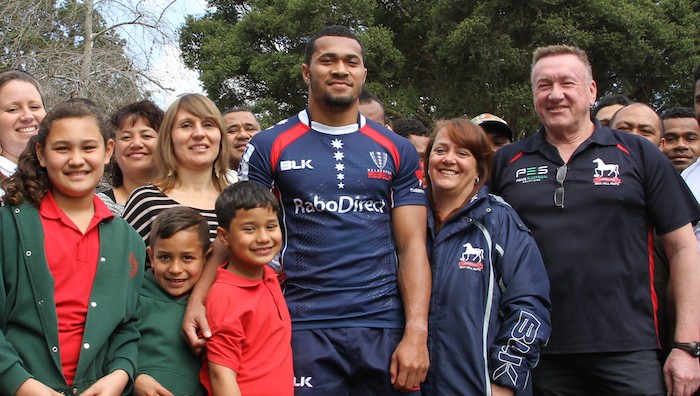 Melbourne Rising winger Sefanaia Naivalu carved out a little bit of history earlier today, signing on the bottom line of a 2 year contract with the Melbourne Rebels.

The Fijian-born back, who plays for Box Hill in the Victorian Dewar Shield, became the first player to be signed to a Super Rugby club as a result of his performance in the three-round-old National Rugby Championship.

Naivalu also becomes the first player to be signed to Super Rugby directly from the southern capital’s local competition.

It caps a remarkable year for the 22-year-old, who was the leading try-scorer in the Dewar Shield – crossing the line seventeen times – and an instrumental part in Box Hill’s incredible rise from last place in 2013, to the Grand Final in 2014.

Sefa has also set the NRC alight since debuting for the navy and pink in Round 1, playing every game and scoring four tries, impressing with his raw speed and composure.

“This is a wonderful result for the Victorian Rugby community. There have been a lot of people from the game locally who have supported Rugby for many years to give players, like Sefa, the opportunity to fulfil a dream; to become a professional Rugby player. This dream is now a reality, but the hard work begins now as he looks to take his ability to the next level under this Rebels Rugby program.”

Naivalu played at Ovalau Rugby Club in Fiji before moving to Melbourne as part of the Rugby Plus program, an initiative of Island Breeze Australia and Box Hill Rugby Club that encourages young men to become role models for their communities through sport.

The significance of a pathway from local rugby to Super Rugby is not lost on the game in Victoria, which has in the past often seen talent move north in search of better chances to develop. VRU CEO Peter Leahy said as much on the signing:

“The NRC is the key ingredient that links the club game to the professional game. In conjunction with our successful Elite Pathways programs, through Junior Gold Cup, Victorian Schoolboys and U20’s, the NRC is now the last piece in the puzzle that gives locally produced talent a dedicated pathway to professional Rugby entirely based out of Victoria. Sefa’s signing is proof that the pathway is working. We expect this to be the first of many over the next few years.”

It is also a massive shot in the arm for the National Rugby Championship. For a competition that sold itself as a much-needed connection between club rugby and Super Rugby to have that link proven – by the state that arguably needed it the most – is an incredible vote of confidence just three rounds in.

Regardless of your opinion of yellow jumpers, eight-point tries and Thursday night football, it would appear that the NRC is working.

And your Melbourne correspondent, for one, couldn’t be happier.

NRC: What’s in a Name?
NRC Round 4 Preview