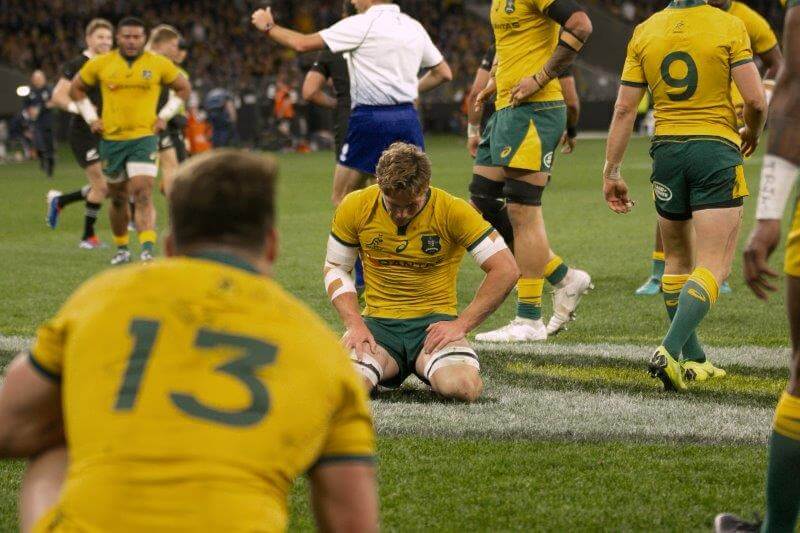 Monday’s Rugby News focuses on the start of the World Cup for the Wallabies and 13 other teams, the latest round of the NRC and a star Wallaby re-commits for the next two years.

The Wallabies have survived a slow start to overcome Fiji 39-21 in their opening World Cup contest in Sapporo.

The Aussies struggled in the first 55 minutes, trailing the flying Fijians by as much as nine just after the start of the second half.

However, the injection of Will Genia and a double to Tolu Latu in the space of five minutes helped reverse the momentum and secure victory.

For a more in-depth review of the game, check out Steve’s match report and Nick’s player ratings from the nail-biting contest.

Captain Michael Hooper was relieved to get the win, pleased with the way his side managed to regain their composure and fight their way back into the contest.

It’s a testing match for us going down like that, in the fashion we did,” Hooper said.

“Fiji really came out of the blocks aggressive.

“They’ve big physical guys and they took it to us there.

“Really proud of our guys to regroup, managed to work our set-piece really nicely into the game and ultimately that paid off really well for us.”

The main concern for the Wallabies coming out of the match will be the availability of winger Reece Hodge, who will face a disciplinary hearing in Tokyo after his dangerous tackle on flanker Peceli Yato.

Yato was knocked unconscious by the tackle and was forced from the field, with Fiji captain Dominiko Waqaniburotu highlighted the incident to referee Ben O’Keeffe at the time, who referred it to the TMO, deeming it all clear.

Cheika was coy on the incident after the game, suggesting that he didn’t get a good sight of the tackle.

“I really didn’t see it, I didn’t even see it in the game,” he said afterwards.

“I saw the tackle, obviously, but the one thing I know is that the Fijian captain went up and spoke to the referee and asked him to refer it – which he did – and it went to the TMO and he told him the tackle was fine.

“You‘ve got to go with what they say, and I didn’t actually see it when it happened.

“I saw the contest – the collision, it was a massive one, a trysaver in that way – but that’s all I do know about the incident.” 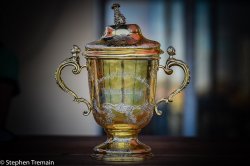 With the World Cup finally here, let’s recap the wild weekend of action across the great nation of Japan.

We start with the home nation, who survived a scare against the Bradbury’s of the World Cup, Russia, before going on to record a 30-10 win in the opening match of the tournament.

The star of the match was Kotaro Matsushima, with the winger becoming the first player to score a hat-trick in a World Cup opening game.

After the Wallabies thrilling win over Fiji, the action turned to Tokyo, where France recorded a nail-biting 23-21 win over Argentina.

France dominated the start of this match and led by 17 points at half time, before harnessing the words of an emotional rallying cry from football legend Diego Maradona pre-game to get them back in the match.

In the end, the Pumas couldn’t close the match out (wonder who predicted that…) when Emiliano Boffelli missed a penalty with time running out.

Saturday was rounded out by a heavyweight contest, where New Zealand confirmed their favourites tag with a hard-fought 23-13 win against South Africa.

The All Blacks broke the game open with an inspired five-minutes of play before halftime, which provided both their tries, before holding off a strong fightback from South Africa to secure the important win and top spot in Pool B (pretty much).

Sunday began with a points-fest, with Italy recovering from a slow start to beat minnows Namibia 47-22 at Hanazono Stadium.

The Azzurri’s ultimately had too much firepower, racking up a seven-try, bonus-point win against a spirited Namibia

It was followed up by an impressive performance by Ireland, who showed why they are the number one ranked side with a 27-3 win over Scotland in Yokohama.

The Irish piggies ate well in this game, with lock James Ryan, senior citizen Rory Best and tight-head prop Tadgh Furlong finding the line in the opening half.

Scotland’s night went from bad to worse after star openside flanker Hamish Watson left the field on a stretcher with a knee injury.

To round off Sunday, England recovered from a slow start to earn a 35-3 bonus-point win over Tonga.

England would score two tries either side of half time to push away from the valiant Ikale Tahi to earn the bonus point victory and march to the top of Pool C. 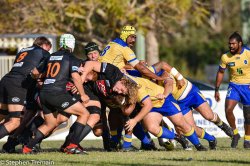 Just as you think you’ve got an idea about who should win, the NRC continues to throw up some unbelievable results during round four.

We start this week in Fiji, where the Drua has put the competition on notice with a 76-29 win over Sydney.

The defending champions scored 11 tries in a stunning prelude to the World Cup contest, which saw the Drua rack up six tries in the last 15 minutes to record their first win of the tournament.

Doubles to Johnny Dyer, Eremasi Radrodro and Jiuta Wainiqolo, along with 26 points to fullback Enele Tikotani helped secure the result and kept their dreams of going back-to-back alive.

If they want to achieve this, then they will have to somehow find a way to stop the Western Force, who continued their unbeaten run with a 45-28 win over Canberra Vikings.

The Force dominated the Brumby/Wallaby lathered side, racing out to an early 14-0 lead after 10 minutes before the Vikings defied a yellow card and brought the margin back to within three points with 15 minutes to go.

However, the boisterous home crowd support got the Force over the line, with tries to Leon Feke and Feleti Kaitu’u making it four wins from four matches.

Sunday threw up the upset of the competition, with the Melbourne Rising dominating a flat Queensland Country outfit 49-7.

The Rising put on a show in Ballarat, running in seven tries to one to record their first win of the tournament.

They were boosted by a dominated performance by prop Vaauli Faamausili, along with doubles by Justin Marsters and Semisi Tupou.

Finally, Brisbane City has rocketed up to second on the ladder with a narrow 24-19 win over NSW Country.

Brisbane controlled the opening half of this contest, with three tries in the space of 10 minutes gifting them a 17-0 lead at halftime.

They would maintain the advantage until the end of the match, with tries to Joey Walton and Jack Grant in the last two minutes securing the bonus point for Country and making the scoreline slightly more respectable. 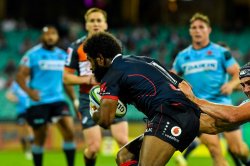 In news that has flown under the radar with the start of the World Cup, winger Marika Korobiete has re-signed with the Melbourne Rebels and Australian rugby until 2021.

He exploded onto the international scene in 2017 against Argentina after playing six years in the NRL for the Melbourne Storm.

The former Fiji rugby league international has started 22 of his 24 Tests for the Wallabies, scoring 9 tries in those appearances.

In his three seasons of Super Rugby for the Rebels, the 27-year-old has crossed for 16 tries, with the winger hoping to expand on that number as he attempts to lead the Melbourne-based franchise to its maiden finals appearance in 2020.

“I am really enjoying my Rugby so it was an easy decision to stay with a Club that gave me a chance to play the game,” said Koroibete from Japan.

“My family and I are very happy in Melbourne and we have support at the Rebels that is not taken for granted.

“I still have a lot that I want to achieve in Rugby and after the World Cup I am excited to get back to the Rebels and do our best to play Super Rugby finals in 2020.”

Melbourne Rebels CEO Baden Stephenson was very pleased to have the league convert extend his stay at the club after losing halves Will Genia and Quade Cooper to Japanese club Kintetsu Liners in July.

“Marika is a hard-working, robust and explosive player who is very well suited to our game style. He is also a fan favourite down here in Melbourne at the Stockade. Our community gets excited watching him play and kids want to be him.” said Stephenson.

“His commitment to continue in Melbourne is a massive statement of belief in the quality of the program and people at our Club.

“Marika has achieved so much in his three years of professional Rugby and we’ve seen his game develop every season.

“We are very excited about his continued growth over the next two years and have every confidence that he will perform on the biggest stage at the RWC over the next six weeks.”