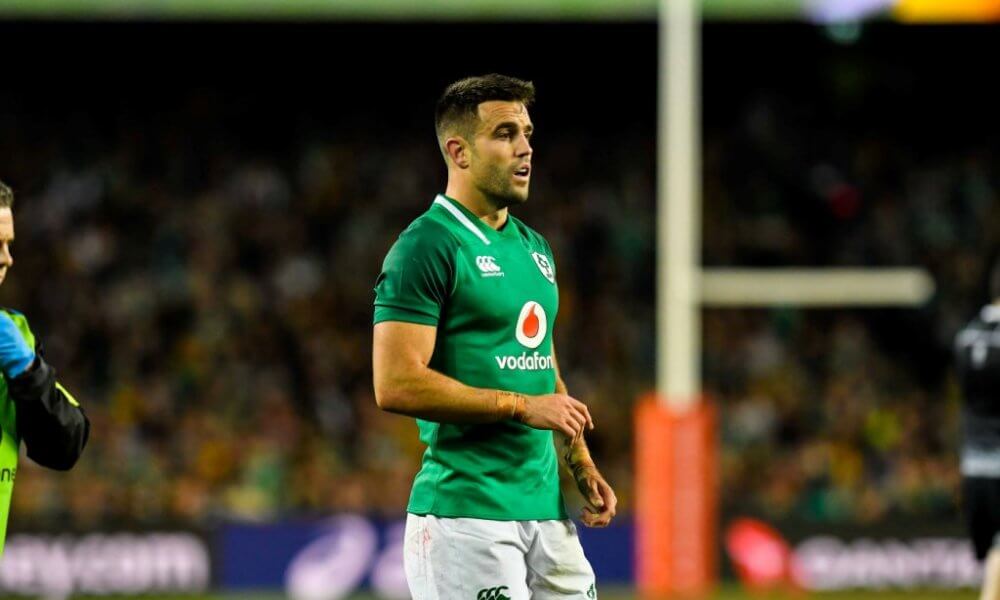 Ireland have secured a bonus point victory over a sloppy Scotland outfit with the 27-3 victory likely to be crucial in deciding who finishes top of pool A.

Ireland looked clearly the better side throughout the match in what was a clinical start to their World Cup campaign. Scotland on the other hand where poor as they failed to convert a number of chances in what will be a worrying performance for Gregor Townsend.

The game got off to a frenetic start with plenty of turnovers from both sides. Breezy conditions where playing havoc with the passing accuracy of both sides regularly missing the target early.

Despite Scotland having the wind at their back it was Ireland who dominated the territory early in the proceedings. Their reward came when second rower Ian Henderson busted through some weak defence from Scotland. Fullback Stuart Hogg brought the big man down five metres from the try line, but Ireland persisted with some pick and drives to eventually score through fellow second rower James Ryan. Johnny Sexton converted form in front to give the Irish a 7-0 lead with seven minutes on the board.

Scotland where showing a clear desire to keep ball in hand, however, a brilliant turnover from inside centre Bundee Aki gave fullback Jordan Larmour a fantastic counter attacking opportunity as he charged his way downfield, only to be brought down by his opposite number Stuart Hogg. A poor kick by Sexton brought the attacking raid to a halt.

Ireland once again found themselves on the attack due to some more brilliant work at the breakdown from Aki, winning a penalty to put Ireland into the Scots red zone. After another penalty from the lineout, Ireland had a fantastic opportunity to launch a driving maul from five metres out. Hooker Rory Best was the beneficiary of this as Ireland got out to a 12-0 lead after 15 minutes. Sexton failed to convert the conversion from out wide.

Scotland got on the board in in the 21st minute thanks to a penalty kick from halfback Greig Laidlaw to bring the score to 12-3 Ireland’s way.

Some brilliant kicking from Scottish flyhalf Finn Russell put Scotland back on attack, however, some poor handling from the set piece play gave Ireland the chance to blast the ball downfield. Stuart Hogg was caught carrying the ball over his try line giving the Irish a five metre scrum in the centre of the field. The Irish forwards got to work off the back of the scrum, only taking three phases before prop forward Tadhg Furlong crashed over to take their lead out to 19-3.

The game proceeded to descend into a real arm wrestle with both sides attempting to build multiple phases in attack. Scotland looked to have cracked the Irish defence out wide, however, a forward pass form a pop ball brought the attack to a halt.

Ireland had a chance to extend their lead out to 21-3 on the stroke of half time but Connor Murray missed a penalty kick from in-front, leaving the score at 19-3 going into halftime.

Despite the rain beginning to come down the game remained an open affair with both sides shifting the ball from sideline to sideline.

Scotland had much of the possession in the early proceedings of the second half, however, poor handling in Irelands 22m let them off the hook.

Ireland finally got a chance to attack after an up and under kick from Sexton for fullback Larmour to chase and regather put Ireland on the front foot inside Scotland’s 22m. Connor Murray quickly shifted the ball down the blindside with winger Andrew Conway having too much pace for the Scottish to score in the corner. Murray failed to convert from the corner leaving the score at 24-3 to the Irish.

Ireland once again showed their composure working a penalty off the back of a number of phases to take the lead out to 27-3 with 12 minutes to go.

The Scots finally put the Irish under pressure with some nice hands opening up space for Stuart Hogg. A cynical penalty from Irelands Tadhg Beirne resulted in a yellow card for the second rower. Scotland had a fantastic opportunity to score their first try but once again blew the opportunity with some poor breakdown work resulting in a turn over.

Irelands poor discipline once again put Scotland hot on attack with the Scots forwards going to work at lineout time to try score off a maul. However, as with the theme of the night Ireland disrupted the play to once again survive the attacking raid.

Tadhg Furlong’s try all but finished Scotland. The Scots where hot on attack before a turnover resulted in Ireland getting a scrum five metres out. It was possibly a 14-point play that left the Scots with too much ground to catch up.

We could not go past CJ Stander. The number 8 was immense with his 11 carries for 62 metres laid the platform for the Irish backs. Stander is clearly one of the best number 8s in world rugby and he showed exactly why against the Scots. Special mention must go to Irelands second row pairing of Henderson and Ryan who where tireless in their efforts.