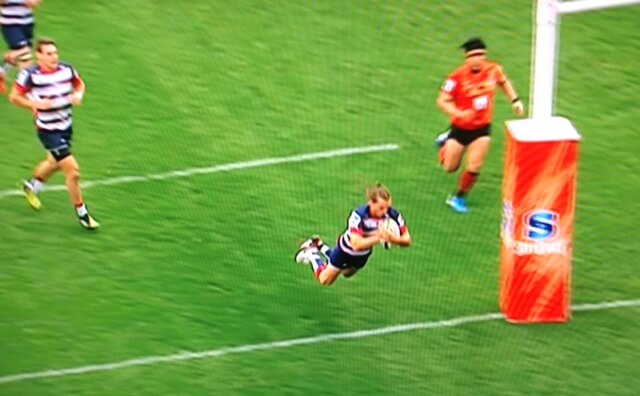 The Melbourne Rebels have taken out the bonus point win after a 35-9 dominance over the Sunwolves in Tokyo.

The Sunwolves had not disgraced themselves in their first two outings, so the possibility of their first win against the Rebels was not out of the realms of possibility. After all, the Rebels had travelled some 30,000km this season, so fatigue was a big factor in this match.

Wet conditions at Prince Chichibu Memorial Stadium kept the previous big crowds away, but there was still a respectable 16,444 local and travelling Rebels fans.

Up for grabs was the inaugural Ganbette Trophy, which will be contested each time these two teams meet. A great initiative to strengthen the Rugby bond between Australia and Japan.

Wet conditions provided a scrappy start with first points going to the Sunwolves via a penalty kick to Tusi Pisi. Early scrum dominance by the Rebels lead to a break by Jack Debreczeni, which almost leads to Shipperley finding the chalk.  Somehow, the Sunwolves defence holds strong.

Several phases later the ball was spun wide to Jordy Reid, who crashed over for a Try in the corner (though Adam Thomson may argue he got the ball down for Reid).  Debreczei missed the conversion, leaving the scores at 5-3 to the Rebels.

The rest of the half consisted of handling errors and penalty kicks. After 40 minutes of error-ridden Rugby, both teams headed off to the sheds for oranges with the score 11 – 6 to the Rebels.

The second half started well for the Sunwolves, immediately going on attack.  The restart kick found Tom English near the sideline, who was bailed into touch with no room to move.  The Sunwolves lineout win turned into a kickable penalty in front of the posts.  Tusi Pisi made no mistake, moving the score to 11 – 9 to the Rebels.

Things really started to open up for the Rebels 10 minutes into the second half with Ben Meehan taking a beautiful inside pass from Jonah Placid to score near the posts.  Debreczei converted to make the score 18 – 9 to the Rebels.

The Rebels dominated the set piece all day.  They earned a kickable penalty in front after the Sunwolves collapsed the scrum.  Debreczei added the three points, moving the score to 21 – 9 to the Rebels.

Eight minutes later, Tom English finished off some great backline play to add another 5 points to the score.  Debreczei converted to make the score 27 – 9 to the Rebels.

After the restart the Sunwolves camped down in the Rebels red zone.  After several penalty advantages to the Sunwolves, Lopeti Timani earned a yellow card.  Referee Mike Fraser pinged him for a shoulder charge near the Rebels try line, which probably saved another Try.  This gave the Sunwolves a 1-man advantage for 10 minutes, though they were not able to capitalise.

A final converted Try to stand-in captain, Sean McMahon with 9 minutes to go cemented the win and bonus point for the boys from Melbourne.

Final score: 35 – 9 to the Rebels, with the Ganbette Trophy heading south to Melbourne until next time these two teams meet.

While it appeared to be an evenly matched game in the first half, the Sunwolves started to fatigue in the second and the Rebels took advantage. While there were sparks of attack from the Sunwolves, a strong defensive effort from the Rebels kept their opposition try count at zero.

Considering the travel from the past three weeks and several injuries, the Rebels should be happy to be 3 from 4 with no major travel to come for the rest of their season.

The Sunwolves will be disappointed with this result. After a close game against the Cheetahs in the previous round, they were confident of landing their first win this week. It was not to be.

The second half. The Rebels stuck to smart, defensive play and wore down the Sunwolves and subsequently managed to pile on 3 tries to take the score out of reach.

This is tough to call. Lopeti Timani had a strong game, with strong carries and defence, including a crucial turnover but receiving a Yellow Card puts him out on contention.  Sean McMahon was in everything again and has lead the team well during Stirzaker’s absence, so he gets my nod for MOTM. Special mention should go to Sunwolves’ Tusi Pisi, who has been strong at number 10 for the new franchise.

Again, stand-in captain Sean McMahon is putting his hand up for selection, does he ever stop? Tom English, who seems to have found his mojo again this season, is also a dark horse for national honours.