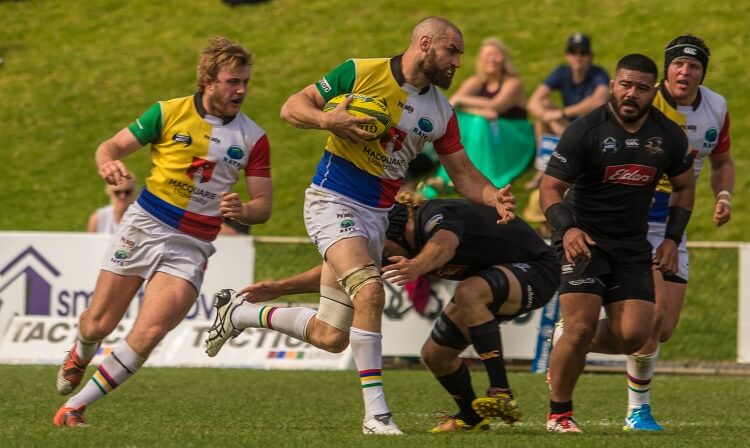 Ian Bright
The NSW Country Eagles lead the NRC after a bonus point victory in a bruising encounter with the Sydney Rays at Pittwater Park.

Both the Rays and the Eagles had an unbeaten record going into today’s game and the scene was set for a blockbuster at a sunny Pittwater Park in Sydney’s northern beaches. A healthy crowd turned up and they were repaid with a fantastic game of rugby.

The Rays were boosted by the inclusion of Wallaby Scott Fardy in their starting line-up and were looking to remain top of the table.

The Rays kicked off to start proceedings and immediately took charge, fullback Johnathan Malo broke through the Eagles defense resulting in the Rays winning a scrum deep inside the Eagles half and Northern Suburbs lock Connor Vest powered over the line for the opening try a couple of phases later. Matt Lucas kicked the straightforward conversion and the Rays led 8-0 after just 4 minutes.

The Rays were looking the better side with Fardy having an impressive debut for the Sydney side, however the Eagles were winning the battle at scrum time and were defending strongly.
Both sides were giving away penalties at the breakdown and midway through the first half Fardy was penalised for interfering with the scrumhalf. The Eagles kicked for touch and Sam Ward won the resultant lineout. This allowed his fellow forwards to charge at the Rays from close range and Tolu Latu burrowed over, Andrew Deegan got the extras and the game was tied at 8 each with a quarter of the game played.

The game was flowing from end to end and both teams were displaying great defensive work with some big hits entertaining the crowd.

Lucas almost made a breakthrough for the Rays on 34 minutes after some good work by the lively Irae Simone but fell just short and it looked like the sides would be even at half time. However, after a penalty for the Rays being offside, the Eagles found themselves within touching distance of the Rays’ line and after a scrappy lineout win they worked it wide for Reece Robinson to score in the right-hand corner as the bell went. Deegan missed the conversion but the Eagles went into the break with a handy 14-8 lead.

The second half started as the first finished and both sides were looking to play attacking rugby, yet it was once more good defensive work that created the next score. Alex Newsome intercepted a pass allowing Sam Figg to make a fantastic line break and send Robinson away for his second try of the game. Deegan converted from the sideline and the Eagles led 22-8 with 30 minutes left to play.

Eagles number 8 Ward was looking especially dangerous with some powerful running and hooker Latu was impressive at the breakdown winning his side a number of penalties and turnovers. However he took his aggression too far and on 55 minutes he was shown a yellow card. With a man advantage the Rays attacked the Eagles line and after another infringement referee Rohan Hoffmann awarded them a penalty try. Lucas made the easy conversion and they were down by 16-22 with just over 20 minutes to go.

The next 15 minutes saw a series of substitutions and another yellow card for the Eagles, replacement hooker Folau Fainga’a being penalised for another penalty at the breakdown.
It was one of the replacements that sparked the match back into life, on 78 minutes Tayler Adams created space with a nice run and passed to fellow reserve Tom Cusack who scored his sides 4th try of the day. Adams made sure of the conversion and the Eagles led 30-16.

Adams was clearly enjoying his stint off the bench and on 80 minutes he made another break this time offloading to Jake Gordon, the Sydney Uni scrumhalf strolled through a tired defence to score under the posts making the final score 36 – 16 to the Eagles and giving them a bonus point win.

With the game tied at 8-8 and just a few minutes to go till halftime, the momentum took a mighty swing in the favour of the Eagles when Waratahs flyer Reece Robinson scored in the corner. Taking the lead right at the end of the half looked to deflate some of the Rays and the Eagles never looked back.

There were a lot of great performances today from both teams. The forwards in particular impressed with some bruising hits and solid runs.  It was a local Rat that impressed me the most, Sam Ward was at his robust best, solid in defense and giving the Eagles an excellent platform with some impressive carries. Tolu Latu was also at his solid best but was lucky that his time on the naughty chair didn’t cost his side more. For the Rays, Scott Fardy was very impressive and the Wallaby number 6 won’t be far off a recall if he continues this kind of form..

This game featured a lot of contracted players but there were some Baabaa eligible names that showed some class.  For the Eagles, other than the standout Ward, winger Alex Newsome looks like a real danger and has pace to burn. Tayler Adams was a real threat running at a tired defense and created two tries in an impressive cameo off the bench.  Another player that impressed off the bench was Rays prop Ezra Luxton, always looking to be involved and providing a bit of stability to the set piece. Fullback Johnathan Malo looked very dangerous early on and was at the heart of the Rays attacking play..