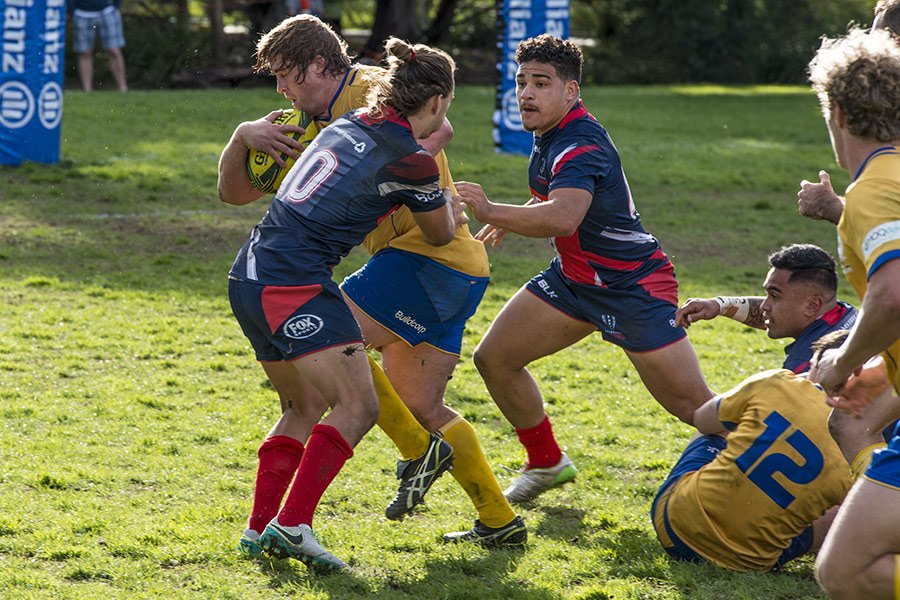 On a perfect day in Melbourne, the Rising defeat Brisbane City 46 – 28.

At the midway point of the season and with both teams going into the clash with one win each this was almost a must win match for both the Melbourne Rising and the two time defending champions Brisbane City.

The Rising came flying out of the blocks keeping time with the clock for the first twenty minutes and leading 30 – 14 at half time. Brisbane City played much better in the second half to narrow the margin, but the Rising were too composed and ran out comfortable winners.

Brisbane made a late change to the side; Jack de Guingand starting at 7 in place of Michael Gunn, who was ill.

The match started in a frenzy; possession changed consistently with plenty of knock-ons, long kicks, turnovers and penalties.

The Rising were first to earn good field possession, with some added luck. From a scrum deep in their territory, Debreczei unleased a 60 metre kick to find touch. However, Chris Kuridrani was judged to have touched the ball, giving he Rising the lineout.

Following the lineout, Nick Stirzaker provided Jordy Reid with an at best flat pass to put him through a hole, Reid ran 35 metres before being stopped three metres short. Stirzaker then threw a long ball to Ikapote Tupai, who scored in his NRC run-on debut in the 7th minute. Debreczeni was unable to convert. 6-0 to the Rising.

After the restart, the Rising were once again on the march. The Rising earned a penalty in their own half, and set up good field position from the boot of Debreczei. After winning the lineout, the Rising pushed further towards the line, testing both side of the field. A lovely inside pass from Harley Fox found a charging Jordy Reid, who ran unopposed to the try line. Debreczeni converted to give the Rising a 14-0 lead after 12 minutes.

Following the restart, Brisbane found themselves down a man, with Patrick Jones earning a yellow card for a deliberate knock on. A short time later Ben Meehan was held up and the Rising forwards drove him over the line to earn a 5 metre scrum. Debreczeni then dummied and jinked his way through the line to score. Meehan converted the try to give the Rising a 22-0 lead inside 20 minutes.

Debreczei in a welcome return to form, including two tries.

In the 28th minute Isi Naisarani waltzed over from the base of the scrum to get Brisbane City on the board. Jake McIntyre converted to reduce Rising’s lead to 22-8.

The Rising were next to score, through some lovely passing from English, Fox and Placid. Placid managed to find a gap out wide, and score a try in the corner. Meehan’s sideline conversion gave the Rising a 30-8 lead.

Brisbane scored next when Naisarani ran thirty metres, and broke a feeble tackle from Sam Jeffries, to score the try. McIntyre missed the conversion, leaving the score at 30 – 14.

Just before half time, Tupai earned his own yellow card for knocking a pass down. At the break, the scored remained at 30 -14 to the Rising.

There was a bit of back and forth in the first ten minutes of the second half but no impact on the scoreboard. In the 52nd minute Tom English saw the cheese for pinching the ball at the side of the ruck after being offside.

Five minutes later, Brisbane made some quality meters, and pushed deep into Rising territory. James, Tui and Lacey all combined to run and impressive 80 metres. The Rising regathered a loose pass, but a ricochet from a poor Meehan kick was scooped up by Toby White, who scored the try.  McIntyre’s missed conversion saw the score remain Rising 30-20.

Brisbane City continued to have the better of the play in the second half but couldn’t put anything else on the board. With nine minutes remaining, and some solid lead-up work from the Rising forwards, Harley Fox was rewarded with his own try. Meehan’s conversion made the score 38-20 to the Rising.

Harley Fox try late in the second half helped to seal the match.

Four minutes later, Frisby took a quick tap and set up James for a try. James took a quick conversion to get the score back to 38-28.

Right on the siren Debreczeni put the icing on the cake one off the scrum from a Stirzaker pass. Meehan’s conversion saw the score finish 46 – 28 to the Rising.

The creativity of Debreczeni, Meehan and Stirzaker helped the Rising to a 22-0 lead in the first 20 minutes. The closest Brisbane City got after that was 10 points.

Jack Debreczeni was heavily involved in a lot of the creative play that resulted in the Rising going out to a big lead in the first half.  In particular, his kicking was very important to the Rising. He was quieter, as were the Rising, in the second half but he had a massive impact when the damage was done.

Aside from Debreczeni, Ben Meehan’s passing game at flyhalf, and the work ethic from Jordy Reid and Harley Fox were the standouts for the Rising. The three standouts for Brisbane City were the running games of Lukhan Tui and Isi Naisarani and the work at the breakdown by Andrew Ready.