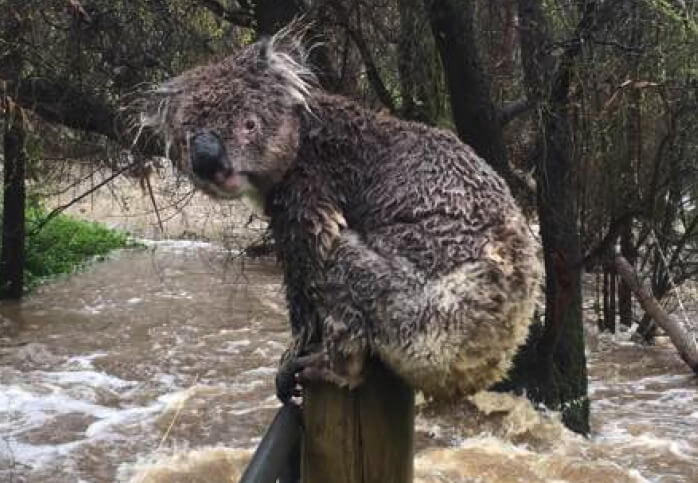 Now I don't know what Koala speak for 'f#####g humans' is, but I reckon I know the 'look'......(Getty Images Russell Latter)
Friday’s Rugby News

First and foremost. From The Hoss Family to all those who have suffered loss and severe impacts to their lives with recent weather events, our most heartfelt condolences. Our family is doing what we can in our own small way to help bring some comfort to those impacted and we wish you all safety, the comfort and support of your community and loved ones and a speedy recovery in these never-ending times of hit after hit after hit after………

Yes, I have learnt my lessons of blind optimism from last week’s Tahs performance, which was the equivalent of french-kissing your grandmother. It might feel good for a while, but ultimately it don’t (or shouldn’t outside of South Australia anyway) get you anywhere. So this week I am much more chastened, grounded and realistic with my fearless predictions. I apologise to the G&GR community and those Kiwis who have Aussie neighbours read them Friday’s Rugby News for my error last week. We’ll dive into growing murmurs again calling out for a ‘third tier’ competition and round it all out with Friday’s Fast 5 Bonus. This week declared by the Kremlin as ‘an enemy of the state‘, so that’s nice.

SRP Round #3 – Tahs to smash The Brumbies.

Regular readers on here will by now know I am a stickler for facts. With news last week out of NZR that the Bledisloe Series from this year on, with the conclusion of a ten year – three test per year contract – would revert to a two test series only, I raged against the NZR, The Nearlies & Kiwis in general (who needs a reason right). At first I smelt a Kiwi ambush, like those from across the dutch sneaking up on an unsuspecting ewe in rolling fog, wearing velcro gloves, I thought Oz rugby had yet again taken it up the clacker from those nearly in All Black.

But no readers, no. I was absolutely wrong and I am not afraid to say so here, in writing, on these hallowed pages. I completely ballsed it up and can now state, with absolute alacrity, that RA were not only happy to forego the third annual test, but also acquiesced to the whole thing.

BUT, in a ratings scoop, I can now reveal a G&GR EXCLUSIVE on these very pages as to ‘why’ RA seemingly rolled over (take that Nathan Williamson). With Australian teams holding FOUR (yes 4 – check it out here) of the top 5 places on the SRP table, RA and their visionary leadership can see the writing on the wall for Rugby in NZ and sensing its ultimate demise, unshackled our financial wagon from their weary & fast fading rugby horses (I mean, last year we beat France – twice – what did the Kiwis do again?)

So, I apologise unreservedly to the NZR, its fans, residents and supporters alike that your teams, as evidenced by facts tendered above, are shit at Super Rugby. Furthermore I am sorry for any inference I may have given that the reduction in annual Bledisloe Tests match numbers was a Kiwi plot. All facts point to the piss-weakedness of 80% of your sides outside the top 5, thus demanding ‘we’ (RA) find sterner competition and better financial options into the future for our dominant SRP sides.

So in conclusion, I’m sorry we are so much better at rugby then you.

It’s true what they say, saying ‘sorry’ is just so liberating, even if nothing meaningful ever changes from that apology……….why is that sounding so familiar?

Good read from The Yoda of Oz Rugby journalism, Wayne Smith of SMH fame and the growing desire for a ‘third tier competition’ among well-placed, senior-type Rugby people. It seems this subject is always ‘Groundhog Day’ for various administrations of RA. It appears an absolute ‘no brainer’ as even coach Dave ‘Moses’ Rennie points out in the article.

My tip, stop bloody talking and start bloody doing. You can find the article on SMH here

Ok, so bygones should be bygones. And his form so far has been stellar. Finally the potential he always had, has morphed into rugby reality, so all Oz fans win – right? But to be a fly on the wall when Izaac ‘The Lawyer’ Rodda meets his former coach at The Communists, Brad ‘The Padre’ Thorn this week and witness the testing of his claim of no ‘bad blood’ would be fascinating. But as Neil Sedaka himself said ‘the only good thing about bad blood, is lettin it slide’……..

Ok, so that’s not exactly what 2027 OZ RWC Bid Chief and failed FUX Sports commentator Phil Kearns said, but it is the vibe though. SMH prolific rugby wordsmith Georgina Robinson reports that RA has secured $120m in NSW (‘THE Premier State’ mind you) Gov’t funds and were promised a Federal contribution on a $4$ basis to match. How convenient then that ScoMo now (allegedly) has COVID. Just as he had to reach into his pockets. Where’s Gladys when you need some coin for any reason at all? Maybe RA boss Hamish ‘The Hammer’ McClennan could start ‘sexting’ the former ‘Queen of NSW’ and see if the coffers loosen a bit, it’s worked before…………alledgedly.

stuff.co.nz reports that half-decent NZ #10, Richie Mo’unga has set the ‘record straight’ regarding his end of last season/early this season break from the game (didn’t even know he was missing) ahead of his return this weekend. The other Ruchie says he took a breather for ‘fimlee and stiff’ and is ‘risted ind rilly kin to git stick in’. Look Princess, it’s ok, take the rest of the year, or at least the Bledisloe series off and we’ll be ok until then, promise.

It shits me when after ONE good game the ‘next big thing’ is anointed by the media. So it seems with returning Force recruit Reesjan Pasitoa, anointed by FUX Sports Christy Doran, whose parents surely took Johnny Cash’s ‘A boy called Sue’ to the next level, as a ‘Wallaby in waiting’. Let the young man learn his craft, hone his experience, rugby IQ and life’s journey and leave the titles of ‘next superstar‘ to those whom the title more naturally rests. Like Angus Bell, Ben Donaldson & Will Harris, you know, generally any NSW Players.

Super W is back!

Season 5 of the Super W, which this year welcomes a Fijian Drua Super W side, kicks of this weekend in the wild west. With 5 teams and a season consisting of 12, yes 12 double headers with the SRP comp the exposure and coverage can only help our Super W athletes and the code overall. All games, venues & fixtures courtesy of rugby.com.au

Hoss – north bound & down, loaded up and truckin’……