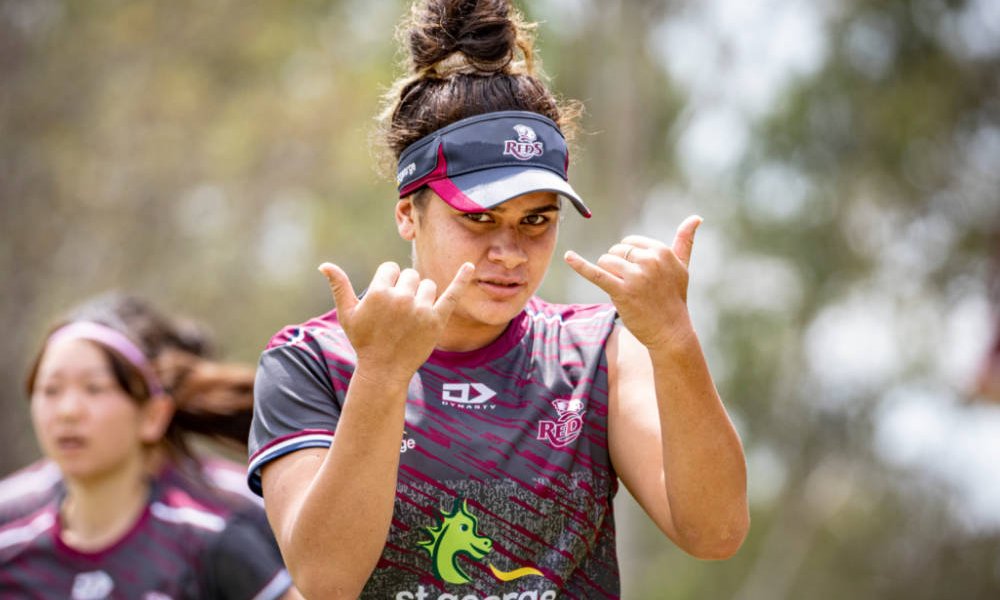 Happy Monday, G&GRs, and welcome to the rugby news for the new week.

Today, we’ll review the weekend of Super Rugby Pacific Round Three matches and the Super W Round One, a player sticking to rugby among ‘code wars’ and the announcement of further pay deals for Women’s rugby players.

Another fascinating round of rugby action this weekend, with some emerging leaders in the race for the Championship streaking ahead in the early stages of the season, whileother clubs are definitely firming to be in the race to avoid the dreaded wooden spoon. Here’s how the weekend unfolded:

Moana Pasifika v Crusaders – For Moana, a debut game as a side could not have been any harder with a match against the dominant team for the last 20 years in the Crusaders. That said, credit where it’s due, the new men battled resolutely and definitely caused the Saders some headaches. Their first try was a piece of well-worked magic and their ability to maintain possession to force errors was good. Some rather unfortunate decisions at the breakdown (including the PK against Time-Stowers early on… I rarely say anything about refereeing decisions; however, this was a shocker) against Moana deprived them some possession and territory. Their Achilles heel was their scrum which will take time to settle. The Crusaders ought to be pleased to have found a way to win, though Razor Robertson will be looking for improvements. A late try made the result seem unjust. Crusaders 33 – Moana Pasifika 12

Fijian Drua v Rebels – The Drua took away the chocolates with their first win as a side in Super Rugby (delighted I tipped this, too) with a convincing victory over the Rebels on the ironically named Sunshine Coast. While our thoughts continue to be with the people of SE Qld and NE NSW, the Drua really showed up for the Friday evening match. In words after the game, ‘they simply wanted it more’. They are demonstrating a side that is learning quickly and implementing game plans that don’t involve kamikaze running a la Cheika-ball. Credit to Mick Byrne and his staff for settling the lads as well as demonstrating ‘heads up rugby’. Personally, I’m delighted the Ponies have played the Drua as I don’t think this will be their last win for 2022! For the Rebels, what started off as a tricky season is suddenly turning into a horror season. A late comeback meant the game was still alive towards the end; however, the Drua were able to hold the Rebels out. Despite a lengthy injury toll, they are still well off the pace even with some top-notch players. The pressure will surely be mounting on coach Foote and the organisation as there has been significant investment in the Rebels from an RA perspective. They must start to deliver. Drua 31 – Rebels 26

Force v Reds – The Force let me, themselves and the Sea of Blue down in the tipping stakes this weekend as I fully expected a bit more from the Western men. The Reds were clinical despite two straight weekends of playing in shithouse conditions and, unsurprisingly, struggling with formation. JOC gave Tim Horan a reminder of his talents with a superb outing at 10 while the battle between the forward packs was certainly interesting. I think the Reds were slightly lucky to remain with their full complement of players as long as they did; however, despite some cheese handed out, they managed the game really well. A late try to deny the losing bonus point to the Force could be critical come finals time. The Force will be disappointed with their match and will, ultimately, learn that, while they are close to the Reds and Ponies, they still probably have a season or so of hard work to really move to the next level. They can do it and, for the good of Australian rugby, I hope they prevail! Reds 29 – Force 16

Hurricanes v Highlanders – A bit of a closer game than I expected; however, NZ matches do have a habit of surprising me on occasion. The first half was more a game of attrition that of action with the second half coming alive to bring excitement to the fans live and watching on telly. Liam Coombes-Fabling will be rueing his dropped ball with an all but open try line ahead of him. Clinical skills like these are what hold the Landers back from their South Island comrades. A bonus point in their loss could well come in handy though. Hurricanes 21 – Highlanders 14

Blues v Chiefs – Another bloody cracker of a game and one that I could easily watch again over the coming days. Some standout performances from Brad Weber and Pita Gus Sowakula meant the Chiefs were always going to be right in the battle; however, the Blues got themselves out of a tight spot after a late Chiefs penalty attempt sailed inches wide of the uprights to ensure the Blues got the spoils. After their Trumpian meltdown last week, any win is a good win for the Blues. Blues 24 – Chiefs 22

Brumbies v Waratahs – The Brumbies delivered a clinical victory over their interstate rivals. In a physical tussle that fortunately didn’t see the levels of shitfuckery from certain players from a few weeks ago, the Brumbies had the Tahs (mostly) in check. Even as one of the most blue, white and gold-eyed Ponies fan, I’m glad (sort of…I feel dirty now) to see the Tahs get their shit together from the ruins of 2021 and credit goes to both the coaching staff and the players for this. As good as it can be to watch the Tahs teams get flogged, the reality for Australian rugby is that we require all of our teams to start producing consistent results, particularly when we play the long game of two RWCs and a Lions series in the coming years. Similar to the Landers, a losing bonus point could be handy come the pointy end of the season for the Tahs. Brumbies 27 – Tahs 20

SUPER W – ROUND ONE

Fijiana v Rebels – The Fiji side, new to the competition, walloped the Rebels Women by a score of 66-5. In ominous signs for the teams yet to play the Fijian side, Rebels captain Mel Kawa said, “What can I say? I’ve never played 80 minutes of (rugby) sevens before! They played fast-paced, up-tempo footy; I thought if we could hold them up for the first 15 minutes, but they kept coming. But we didn’t give up, even though we were gassed.”

Brumbies v Waratahs – A 19th straight win to the Women from NSW led to their victory over the Brumbies side 31-17. The Brumbies, led by former Waratah star Ash Hewson, led 10-0 in the early stages of the game before a strong finish from the NSW side led to a compelling victory. While obviously pleasing that the programme in Canberra is improving, again with a W-RWC fast approaching, the Tahs Women are another class above.

Reds v Force – The Queensland side defeated the Force side 43-7.

My own note to Rugby Australia here….. get some fucking news coverage on this! It was tricky to find anything in print to review the games apart from some mediocre highlights reels. Golly goodness me.

Firstly, it’s fantastic to see Georgina Robinson writing, even if it is for the SMH. I’ve quoted her article here: The Western Force will become only the second Australian Super W side to pay their players in a move that will ramp up pressure on their rivals to follow suit. On the eve of the Super W season, which will feature 12 double-headers with Super Rugby games and a weekly free-to-air match on 9GO, Force chief Tony Lewis announced his side was joining the Melbourne Rebels in handing match payments and training reimbursements to squad members. Force players selected for the Wallaroos will receive a $5000 bonus, every squad member will be paid $1500 to cover training costs for the season, and the match-day squad will receive $300 a game for wins and $100 for losses. It follows Melbourne’s move to pay match-day squad members $1000 a game and reimburse all squad members for training costs. Lewis said the Force women would have a full-time coach and administrator next year, with a view to becoming a 10-week, full-time paid program in the future. “We’d like to think we can get there next year, but it could be two or three years,” he said. “If we want to take the game to the next level and make us competitive against AFLW, NRL or soccer we are going to have to pay our players a fair wage.”

I’ve highlighted the last part here. While rugby in Australia is certainly struggling, we cannot afford to allow rugby for 50% of the population to simply fall away. While I appreciate the argument of “they have to play the same as the men”, and, “if they bring in sponsors, etc., then we can pay more”. This though is a case of the chicken and the egg. If you’ll recall a few years ago when Buildcorp, essentially, told RA to go fuck themselves (quite rightly, too) after their abject failure to deliver on a national women’s competition, we have struggled. Without the matches, no sponsor will want to get burned like Buildcorp did. By providing both quality and quantity, there will, hopefully, be investment opportunities in the future. Pay agreements like these are definitely a good start and the women absolutely deserve it.

Australia isn’t the only programme where changes are being made. Rugby Pass published an article where 30 independent recommendations about the Irish programme were duly implemented by Landsdowne Road after the Irish failure to progress to the W-RWC.

“The Irish Rugby Football Union (IRFU) is to increase its funding into the women’s game by £830,000 annually following a review into Ireland’s failure to qualify for the World Cup later this year.

An independent review conducted in the wake of the team’s disappointing performance produced 30 recommendations, all of which have been accepted at Lansdowne Road.

It will increase the IRFU’s annual budget for the women’s game to £3.3million, while two new roles are to be created – head of women’s performance and pathways and a full-time women’s XV national team programme manager”

Good news for Wallabies and Tahs fans with Isiah Perese both turning his back on reported advances from the NRL and signing on with the Wallabies on a two season deal. Again, the Ponies supporter in me hates writing this; however, I have truly been impressed with both his skills and dedication since his signing last season. He could well be a long-term option in the centres for the Wallabies.

“We have heard about the Drua being on alert for rugby league agents looking for a bit of poaching, but it seems the Fiji rugby league team are wary of rugby types trying to pinch their players, too. The Fiji Kaiviti Silktails – who play in the NSW Cup – train on a set of ovals across the road from the Waratahs’ training facility at Daceyville, in Sydney’s east. The story goes that some Waratahs officials decided they should be neighbourly and wander across the road to say hello. They hadn’t even got close when they were stopped, told to turn around and head back from whence they came. Good chat.

That’s all for this Monday, folks. Hope you’ve all been on your best behaviour!