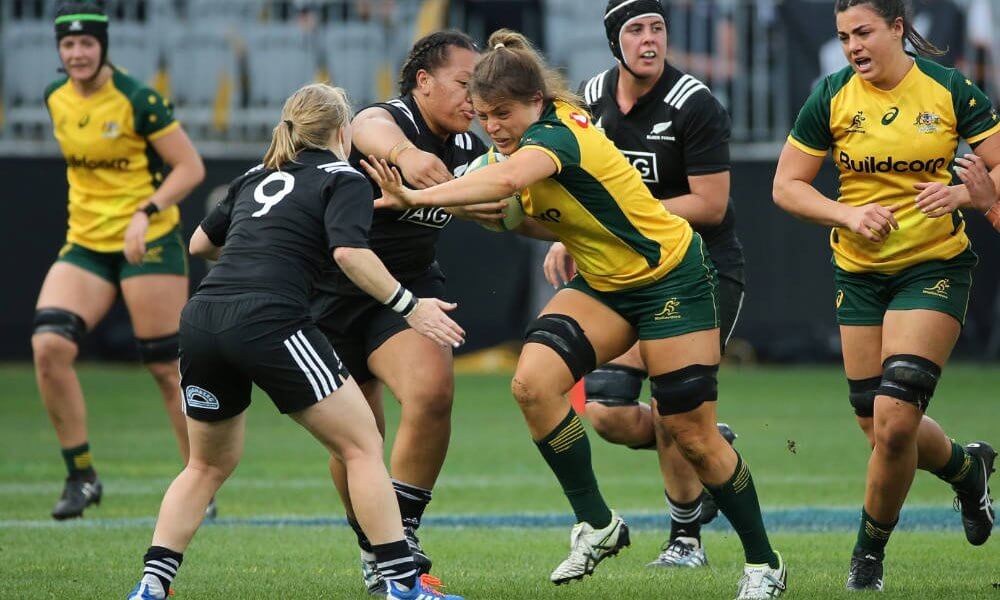 The Hunter Valley Crips held their memorial service for Coolio on Thursday night, rendering Hoss unavailable to do today’s news.

When asked if he wanted to put anything up for Friday’s news, Hoss replied: “Tell me why are we so blind to see? That the ones we hurt are you and me.”

Please be nice to Hoss at this time of grief. It won’t be long until the old Hoss is back to being in the top seven regular above-the-line G&GR contributors.

In the meantime here’s some proper news on a Friday.

Nathan “true blue” Williamson reports that “a packed crowd awaits the test between the Black Ferns and Wallaroos at Eden Park”, which is remarkable considering the game isn’t until Saturday and how cold NZ gets at night.

The opening World Cup match is set to smash the record for the largest attended women’s sporting event in New Zealand, with the 2018 “Separating husbands from sheep with crowbars” final relegated to a distant second.

Jay Tregonning’s side are searching for their first win over the Kiwis, bolstered after a strong performance in Adelaide during the O’Reilly Cup series. The Aus-NZ game is the first in a triple-header at Eden Park, with South Africa and France to open the tournament before favourites England face newcomers Fiji.

Australia will then head north to Whangarei, set to play Scotland (15th September) and Wales (22nd September) at Semenoff Stadium.

Fun fact: the tournament is called ‘Rugby World Cup 2021’ despite being played in 2022 because COVID forced the event to be delayed by 12 months.

Christy Doran of Fox Sports reports that Rugby Australia could still walk away from Super Rugby in 2024, with the governing body left disappointed after New Zealand Rugby walked back on promises.

It comes as RA is fielding calls about private equity deals, which promise to inject between $100-200 million into the game.

At present there’s a huge imbalance between the two broadcast deals, with RA’s deal with Stan/Nine only amounting to $33m per year. That figure is well short of the estimated $100m Sky Sport pay the NZR.

At the 27 August 2022 Adelaide meeting the NZR board, headed by chief executive Mark Robinson, met with their RA counterparts to attempt to work out a deal to secure their domestic future through to 2030. Robinson came to the drawing board with their version of RA’s 50-50 split. The governing body, with the support of their various stakeholders, agreed.

Since then, however, the tide has shifted with the NZR presenting an alternative proposal.

With a Lions series on the horizon in 2025 and a home World Cup in 2027, as well as a private equity deal nearing, RA believes they would be shooting themselves in the foot if they accepted the deal.

“The idea of that meeting in Adelaide was to get everyone together and try and ink a deal,” Brumbies chair Matt Nobbs told foxsports.com.au. “And they had done a body of work, but it seemed that they had done the body of work before consulting with their members. It seems once they presented to us, they’ve then gone back to their members and said this is our proposal to RA and I think their members have obviously gone, hold on, ‘I think you probably need to try a little bit harder and let’s see if we can screw a bit more out of RA’.”

Nobbs said RA and their Super Rugby franchises were just trying to get “parity”.

The Brumbies chair has backed up McLennan’s call that if an equal deal is not presented, they will still consider forming their own domestic competition. The tensions come as NZR attempts to push RA towards signing a private equity deal with Silver Lake. After a year of negotiations, the NZR signed off on a $AU180m deal with the US firm. A number of other unions, as well as the Six Nations, have signed deals with CVC.

It means the NZR could be isolated if RA don’t sign a deal with Silver Lake. “I mean they did a private equity deal on the proviso that the Australian teams were part of a Super Rugby competition moving forward,” Nobbs said.

“But we know, there’s obviously all the stats out there like I sort of know my style of refereeing, I have my philosophies around how I referee the tackle, the breakdown, I know what my 50/50 calls are for example and that might be slightly different to other referees. With all the stats that are available now, it’s really good, every three to four months I look at those stats just to see where am I trending, am I missing a lot of side entries at the breakdown, is that something I need to clean up on and what is my go to decision when there is a jackler on the ball, is it holding on or is it not supporting body-weight.”

“When I preview a team – and I think most referees do this – a lot of it is based around what does the team do that is common to their style? They play with a lot of speed, they like to send the ball wide, do they line out to maul a lot. It’s all related to what’s going to surprise me in this game, because as soon as referees are surprised, that’s when they start making mistakes.”

“For example, for Otago, I know they do a lot of moves around the back of their line-out using that space and it can get pretty complicated at the back of a line-out, so I know that, which means that I have to get quickly around that last pillar at the line-out or actually stand at the front of the line-out. So, a lot of it’s actually around not being surprised, but positionally, where can I be to be able to make the right call.”

“I think gone are the days where we look at what this loose-head does, what this tight-head does because that was last week, that was against another front row. It’s more about the style of the game and how can I get in better positions to make accurate calls.”

“It just takes time, for example, when all the (higher ups) that make the laws and what they’re going to change and what they see the future of rugby looking like, until you actually implement it on the field, you don’t understand, what’s the parameters that’s going to happen when the referee actually goes out and blows it, what’s actually the outcomes when a player makes those tackles. So I think it takes a few trial seasons and what I’m glad about is that we’ve started this trial process 12, 18 months before this next World Cup.”

“I guess rugby happens and laws happen in World Cup cycles, they can’t go and change things within certain windows, so unfortunately we have to endure it as we start it but it gets better every few games in, as referees, as players start to adapt, as coaches start to coach what those priorities are and I think we do get a better outcome in the end, it just takes a bit of time.”

“We do have mental skills help in the background,” O’Keeffe continued. “Especially in New Zealand Rugby, we have that resource but we’re lucky that New Zealand Rugby provides that, I don’t think every union in the world has that. That mental side of it’s really critical and especially I think, you know 2019 World Cup coaches start getting stuck into referees, I think the next one, 2023 just with the margin of error being so small with how competitive all the teams are, there’s going to be a lot of focus on refereeing decisions.”

“It takes about 24 to 48 hours for us to sit down, go through the game, talk with our coaches and actually come to a decision of whether we were right or wrong. I wouldn’t mind every Wednesday, talking through one to three things that happened in my game, to better explain it to the public, even if it was small, they just wanted to know my tackle process ‘ok what does a tackler have to do when they’re at the back of the ruck, why when they’re stuck in there is it still a penalty?’ Because often players complain about that.”

The Day of the Jackal

There has been an explosion in the number of rucks since the mid-1990s. The increase, by up to 300 per cent a game, means that current commentators who played in the 1990s are talking about a sport that has only a passing resemblance to the one they played.

Over the same period, the number of players involved in the rucks has actually decreased. As coaches noted the game moving to a repeat ruck format, they twigged on to the fact that it might be a good idea to spread their players across the field. Hence, the modern phenomenon of rugby being a game between two sets of players repeatedly running into one another.

Remember those fierce but beautiful tests played between Australia and New Zealand at the turn of the millennium? They were played in that fashion because the forwards, on their feet, operated as a pack to secure possession by blowing over the ruck, decluttering the field and allowing a proper back line to form behind them.

The last part of this unholy trinity is the size of the players. At the start of professionalism, you could get away with being under 100kg as a forward and still play at the highest level. Today? Forget it even if you are 105kg. At that weight, how would you “survive the cleanout” – as the macabre terminology goes – from a 135kg prop? Try rugby league instead – the “game for all sizes” is no longer the place for you.

How do we get out of the current mess? Making the players smaller has been suggested, by way of reducing the number of tactical substitutions. Work is under way in this area, although the fear of unintended consequences haunts rugby’s decision makers.

In the 1960s rugby authorities had had enough of flankers detaching early from scrums to get an early start on the attacking No.10. However, when they were forced to remain as part of the scrum, they started to push: what followed were the power scrummaging years and rugby’s fight with spinal injuries. It is therefore no wonder that some might ask if fatigued players might be a danger to themselves and others.

The jackal these days is frequently illegal, rarely results in turnovers, is demonstrably less safe than scrummaging, puts the flow of the game entirely in the ref’s hands, and does nothing more than to set up the poor “jackaler” as a target for the massive transfer of energy from the arriving cleaners, who power, acceleration and mass has increased exponentially.