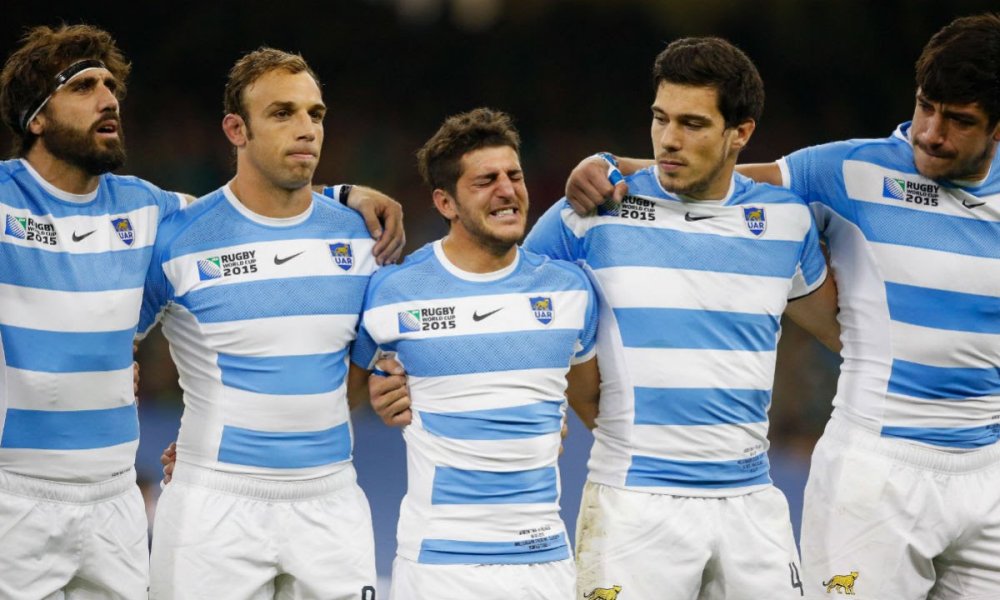 Don't cry for me Argentina, the truth is, we're gonna beat ya. Maybe.
Friday’s Rugby News.

FINALLY! Rugby is back baby and this weekend there’s a lot to play for: redemption, injury return, pride, careers, RC points, old scores to settle, reputations on the line and throw in the battle for a nation’s rugby soul for good measure. What’s not to like!

So, coffee’s ready, morning schedules cleared? Great, let’s go. Today we’ll start with ‘The Game within the Game’. Look at what’s at stake for Kiwi players & fans alike with ‘Ahhh, Souls’. Continue with matters surrounding player welfare with ‘The Brain Pain Part#2’. Look at teams, times, coverage & fearless predictions for Round #1 of the RC with ‘Let’s get it on!’ and take us home with ‘Friday’s Goss with Hoss’ safely returned from a Taiwan dalliance with FRN fan and saucy minx, Nancy Pelosi.

The game within the game.

Hardly a glowing endorsement for the former coach’s communication or management skills, yet at the same time perhaps an insight into Seagal’s petulance and ability to carry a grudge that would ultimately all combine into a magnificent crescendo of faeces with a 2019 RWC QF loss.

Now all of the above nicely shoe-horns us into this Saturday’s main event of one Quade ‘Lazarus’ Cooper against his former tormentor mentor and current FISMs coach. Yoda Smith of the SMH outlines an interesting and complex history of the relationship between the mercurial #10 and the slightly Tahs enamored Wallabies coach, who had a history of justifiably selecting Spanners Foley at #10, but who can forget QC’s parting tweet after MC ‘resigned’: “If he cared about Aus rugby he would have done it a while ago,” he tweeted.

But it’s not just the above that adds some spice to what will surely already be a fairly torrid & physical affair, for mine there are any number of fascinating plots and subplots as well:

I can’t help but think there’s a lot at stake and I expect a game with plenty of niggle as the FISMs look to upset and derail a Wallabies side that has key personnel already under the pump a wee bit and perhaps, just perhaps, with a point to prove to Mr M Cheika as well.

Ain’t the game within the game grand!

What a week or two across the dutch eh? No pressure on the Nearlies then as they play not one, but two tests against The Catholics in their own back yard, the Republic of the Dutch Dirt Farmer starting thus wikkund.

I accept Australia is a nation that lives vicariously through the deeds of our many sporting sides and usually there’s a handful of these doing well enough (not in orange though) to attach our needy cultural cringe to as we go about our daily grind. But when you’re a Kiwi your choices are either rugby or shagging sheep. Now while participation rates are high and growing higher for the latter, rugby remains the religion of choice for those of the Poxy Isles.

So to that end, these upcoming games in SA are for far more than RC points, they are for the battle to retain the love, admiration, respect and the very salvation of Kiwi rugby souls.

It’s been fascinating watching and the pressure of expectation from Kiwi rugby fans is simply next level. So will the Nearlies win or wilt? Some of the quotes out of the NZ camp have also been fascinating and it would seem the old mantra of avoiding reading the media may not have been followed and to be fair, with so much ‘noise’ around the team, players couldn’t help but absorb the acrimony and unrest, rugby.com.au has a good read and some quotes from the Dunny Luvva, Mr Aaron Smith himself:

Regarding the blunt criticism of both Foster and All Blacks captain Sam Cane has been “hurtful”. “It’s actually quite ridiculous how ruthless it’s been and I feel for them,” he said before the squad left for South Africa. The noise is the noise. The pressure of wearing the black jersey, or coaching it, is big.“

Say what you will, but this weekend’s encounter v The Pope’s Lot will be simply mesmerising viewing. The pressure and physicality of the Boks, their crowds, home town decisions, injuries, the bounce of the ball, all of this will pale into insignificance as the Nearlies battle the expectations of a nation, all while wrestling the doubts and demons from within.

Ahhhh, a battle for souls indeed.

After what feels like an eternity with no rugby, this weekend we welcome back international rugby with Round one of the Rugby Championship and as outlined above, there’s a heap more than just ‘ladder points’ up for grabs from the get go.

The Hossary is also attached, for slow learners.

Well, here we go. A wounded and pressured ABs verse a Saffer side that rarely got out of second gear against Wales yet still won the series. With all the changes made to the SA side during the Welsh series one can’t help but wonder if that series was nothing more than a squad preparation for a two test series against the ABs. Either way the Saffers have 449 caps worth of test experience in their side for this Sunday and look rather intimidating across the paddock.

The Nearlies, well, time for talk is at an end, only results will matter. Contrast the Kiwi pack, that as stuff.co.nz reports has: the All Blacks heading into this series without their two senior tighthead props (Nepo Laulala and Ofa Tuungafasi), France-bound loosehead Karl Tu’inukuafe and world-class lock Brodie Retallick and you get an idea of the extent of the challenge in front of the visiting pack.

I absolutely expect a Kiwi ‘response’ to the Oirish series loss, but I still don’t know if the ABs have the starch in the forwards to go toe-to-toe with a SA side lying await in ambush.

Fearless prediction: The Pope’s Lot by 6.

FUX Sport reports that Julia Roberts now out from a training run concussion, which leaves penalty magnet Palestine to start at #2. Gandalf out with a 7s injury and for what, a comprehensive 4th in Birmingham? The Squatter to start at #12. Jordan of Nazareth now a winger after starting his last run as our ‘answer’ at fullback and ‘John Denver’ now at #15. ‘The Bull’ and ‘The SS’ are out injured, meaning Matt Gibbon may get a debut off the pine. The Abattoir has been ordinary this year, a new #6 and our third loosie combo over 4 tests. A coach with a 39% win record (is it too early to switch from ‘Moses’ to ‘Freddy Mercury’ (Under Pressure) yet?) and a team seemingly stagnating. All this against a backdrop of vendetta and acrimony with our former national coach, on several fronts (Lazarus, The Porn Star & RA itself) in charge of South American powder kegs – big ones at that – at home and ready to rip?

Did I miss anything?

Terrific viewing for sure, but pick a result, well, buggered if I know.

Update *** Cheika has made 9 changes to his side

Fearless Prediction: For no other reason than sheer, bloody, one-eyed fanaticism – Orange by 5.

Brilliant video and explanations from rugbypass.com for all to watch first.

‘All of us are our brains’ what a simple, succinct, yet entirely appropriate summation and also explains the many and varied issues Yowie faces, but also the absolute vital importance and challenges that the game of Rugby Union faces in it’s duty of care for all.

To that end, I’d encourage all to read the whole rugby.com article which outlines suggestions from not for profit, concussion awareness group ‘Progressive Rugby’ For those without access, I have attached the guts of the matter below as a starting point.

Player load management must be at the heart of any actions to reduce concussion and I’d be interested to see what the G&GR community thinks might be good ideas.

And if you think CTE forms after a career of head knocks, have a read of this on thetimes.co.uk and ask yourself this: ‘what if it were your loved one?’ What would rules and protocols would you expect & insist on?

Sometimes there are just no words. I’ll let our golden girls of rugby 7s explain during their WWOS interview – 3.15 minutes in.

Explains why I have be called a ‘crunt’ all these years, but I hate running, go figure.

As Italian as Pavlova!

Surely it’s ‘the vibe’ right? Well, maybe not ruck.uk.co reports that after 100 odd tests and four RWCs, it turns out Mario Castrogiovanni may not actually have been ‘Italian’ after all. World Rugby should take back all those trophies they won during his patronage, like, ummm……………………..

Horton hears a who.

Horton featured ten times for the Waratahs in 2022; however, the emergence of Mahe Vailanu and the return of the living (so far) ‘crash test dummy’ (new nickname), Tolu Latu, saw the Sydney Uni product slip down the depth chart.

Interesting read from Paul Cully of the SMH about the need to resist rushing to hire Razor Robinson should Freddy Mercury not improve results (aka win the 23 RWC). I personally disagree with Mr Cully, but a worthy read nontheless.

OK, so the ink is drying on the news around our Gold Medal Women’s 7s side, but I have to say it, Charlotte Caslick is a out & out friggin’ legend. Sure it’s a team game, but I’d invite you to go back and watch that semi against the Kiwis and just count the tackles Caslick made, the distance she covered, her leadership and manner she conducts herself is exemplary.

I was fortunate to attend the 7s at the 2018 Gold Coast Comm. Games and the losing final was an epic game and to see Caslick and co gain redemption in that SF last week was equally an incredible game. Well done our women’s 7s and CC – you’re a bloody legend!

Nutta, find this rooster and revoke membership to the brotherhood of the chubby. If it weren’t so awesome it would be embarrassing and left footed to boot. Check it out on twitter. Even the opposing prop claps and jumps around. What’s wrong with the world!