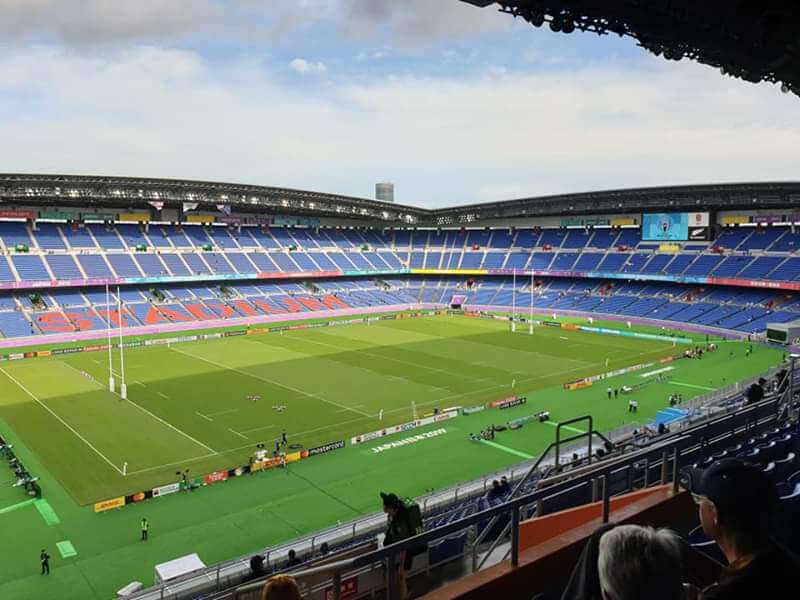 This weekend marks the half way mark of the home and away portion of Super Rugby AU with two more games before we start the run to the end.

Friday night sees the Force “host” the Rebels at Leichardt Stadium in Sydney (Friday 705PM EST, Fox Sports and Kayo), and with attrition starting to take a toll both teams have rung the changes. The Force are desperate to break their duck after what was arguably their worst performance against the Brumbies last week, while the Rebels are looking to keep pace with the front runners after a performance last week against the Waratahs that with the number of line breaks they had could have been 20 points higher.

Team wise, the Force have Chris Heiberg starting upfront in the only change to the engine room, but out back there are changes and positional shifts galore. Captain Ian Prior returns at half and Richard Kahui and Kyle Godwin form a new trans-Tasman centre pairing. This shifts Marcel Brache to the wing, with Brad Lacey moving to the bench. Bench wise, Johann Bardoul and Force mainstay Pek Cowan come onto the bench.

The Rebels have made changes all over the place with Jermaine Ainsley starting in favour of cult hero Pone Fa’amausili. Esei Ha’angana joins Trevor Hosea in the second row and Isi Naisarani returns from injury at 8. Andrew Kellaway moves to 13 and former UQ player Tom Pincus comes onto the wing on debut, with Reece Hodge replacing the injured Dane Haylett-Petty at the back.

This promises to be a bit of grudge match, with many Force fans holding a significant piece of their resentment towards the fact the Rebels remained in the competition at their expense. Add in ex-Force coach Dave Wessels to the mix and it could be an interesting night.

Saturday (715PM EST FoxSports and Kayo) brings us the top of the table clash between the pace setting Brumbies and a Reds outfit fresh off the bye.

Despite the week off, coach Brad Thorn has rung the changes, some forced and others seemingly tactical. Injury wise, a MCL has put Harry Hoopert out for 4-5 weeks with Dane Zander earning the start. Angus Blyth returns at lock, pushing Angus Scott-Young to 6, skipper Liam Wright back to openside and Fraser McReight to the bench. In the backs, arguably the Reds most potent weapon, half Tate McDermott sits on the bench, replaced by Scott Malolua. The starting backs are otherwise unchanged, but the bench sees the return of gifted but injury cursed Jordan Petaia.

The Brumbies have made some changes after the win last week over the Force, with Darcy Swain back in the starting side. The bench sees Tom Ross and Tom Cusack come on with Murray Douglas dropping from the 23.

With a forecast likely to see a kick off temperature in the low single digits, the Brumbies will be looking to consolidate their lead on the table with the Reds keen to close the gap. It should be an interesting match with the Brumbies yet to really hit top gear and the Reds needing to start much better than they did against the Force last time out or risk being blown away.

Scott Rea wraps his brain around the Rebels and Force here 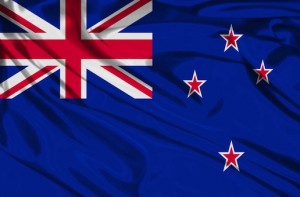 We are into Round 8 and while the Crusaders probably still have one hand on the trophy the loss to the Hurricanes last week makes it interesting.

Saturday (505PM EST Fox Sports and Kayo) sees the still winless Chiefs take on the Crusaders at home. Now mock all you like but the men from Waikato have been desperately unlucky in multiple games this time around, and through either bad luck, bad game management or catastrophic collapses find themselves propping up the wrong end of the ladder. They really should have won at least 2-3 games if not more, but will be up against it this week facing a Crusaders team hurting after losing at home for the first time in 36 games.

The Chiefs have pulled the trigger and put Aaron Cruden in the starting team as they look to shock a few people and pull off the win. They probably can too given how tight most of the games have been. Despite the brutality, the Crusaders have stayed relatively settled this week, especially in the backline, while the Chiefs will be relying on the non stop efforts of Sam Cane and Lachlan Boshier, the cunning of the veteran Cruden and the sweet stepping of Damien McKenzie.

ned further with the unbeaten Crusaders hosting the Hurricanes in Christchurch. While the Hurricanes have been on the improve since week one, the Saders are on the back of an astonishing 36 games home unbeaten streak and have conquered all before them thus far. This game is Saturday (505PM EST, Fox Sports and Kayo).

The other game (Sunday 135PM EST Fox Sports and Kayo)  has the Highlanders take on the Blues, with the Blues correcting the mini collapse of the last few weeks and just seeing off the Chiefs last week. No team news at the time of writing but it was intriguing to watch Beauden Barrett running the team at 10 last week after so many weeks at fullback. He will undoubtedly be better for the run and assuming he backs up there should do enough to see off a Highlanders side keen to finish off positively.

Stay in touch with the team news courtesy of ESPN here 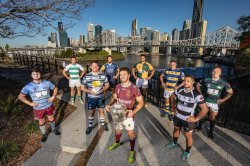 Yet another competition gets underway this weekend, with the Queensland Premier Rugby kicking off, meaning we only have Melbourne left. Let’s take a brief look around the place and see what is ahead of us.

Four rounds deep in Western Australia and we still have four unbeaten teams. Last week saw Cottesloe down the previously unbeaten Associates. They will be looking to further thin the ranks of the unconquered as they take on UWA. Joondalup take on Nedlands in another match of the unbeaten. The other end of the table sees Arks clash with Caveliers as both teams seek their first wins of the year.

In SA, Brighton and Old Collegians remain unbeaten after wins last week. The match of the week will be Brighton v Southern Suburbs with first taking on third.

Down in the nations capital, close games were the order of the day last week, with 15 points being the biggest margin. This has left Viking and Owls undefeated leading into round three. This week Vikings take on Eagles, Owls play Whites, with Royals and Wests facing off hoping to secure their first wins.

In Sydney, Northern Suburbs, Uni, Randwick and Gordon are unbeaten after two weeks, with the TV game this week being Northern Suburbs vs Manly on 7TWO at 3pm. Uni will be looking to make light work of the Wildfires. Not only are the two newcomers feeling the pinch, both West Harbour and Two Blues are struggling to score points and break their 2020 ducks.

The big news in Sydney is the release of NSW Waratah squad players to play Shute Shield this weekend. You only need to speak to most players to know how much they cherish running out for their outfits. While it is only fringe players at this stage, the door has been slightly opened for it to ramp up. The concern has been largely around the biosecurity issues around not mixing groups of players too much but this has been addressed to some extent, to the point where this has been ticked off.

Tasmania has seen round one complete with Taroona, Devonport and Harlequins getting the win, with all three matches being decided by 11 points or less. Quins and Taroona meet this weekend in the highlight game.

The NT has gotten a bit further on than the rest with teams having played at least 7 games. University Pirates have managed to gap the rest a bit remaning undefeated while South Darwin, Casurina and Dragons fight to finish second.

Up in Queensland, the Queensland Premier Comp finally kicks off with the regional and suburban comps having come back over the past several weeks. With limited trialling it will be interesting to see how the teams shake out, although the perennial heavyweights Brothers and UQ should feature. The first round will see Sunnybank face Easts, Souths host Brothers, perennial stragglers Norths tackle UQ, and GPS play host to Wests.

For some more detail, colour and news around the club traps of the nation, take a look at Nick Wasiliev and his column on Rugby.com.au. He does the club scene more justice than I ever could in this little column. 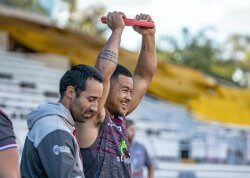 After all negotiations for player contracts were put on hold for several months as a result of the COVID-19 pandemic the first signs that the wheels are moving again came on Thursday. Boom Reds centre Hunter Paisami has just inked a new two year deal, capping a metoric rise for a player who wasn’t even contracted at Christmas.

The news, reported by Christy Doran over at rugby.com.au here will be a big boost to the Reds, after the shock departure just before the restart of Izack Rodda, Harry Hockings and Isaac Lucas. Coach Brad Thorn was as close as he will ever get to being excited, saying, “”It’s great to have Hunter here with us for another two years,” Thorn said. “He’s my type of guy. He’s physical and direct. He runs hard and hits even harder.”

Even more pleasing is the backroom situation. Paisami shares a manager with the aforementioned three so there was some risk that the terse relationship would again cause issues in the way it has seemed to in the past. However this is not the case this time and is hopefully a sign of the thawing of relations on that front.

Paisami himself was pleased to sign, saying, “It’s an honour for me to stay here in Queensland,” he said. “I’ve loved my time here at the Reds. I don’t see myself anywhere else. I’ve made some good mates here through rugby.”

Future wise this sets the Reds up with quite the selection question. With two of the top 13’s in the same squad alongside Jordan Petaia, how do you fit them all in? Hamish Stewart is a great second play making option at 12, and these two 13, and then you add Chris Feauai-Sautia who alternates between wing and 13. It isn’t a bad selection headache to have if you are Brad Thorn.

On a national front, the signing marks a useful moment for the game. Paisami isn’t the highest-paid or even highest-profile player but it does lay a marker that the game is open for business again. And with international travel still shaky, along with the possibility of diminished financial returns overseas for a period, now might be a good time for players to consider staying here, even if it is just for one season.

Super Rugby Preview: Brumbies host Reds in top of the ladder clash
Rebels stay in the hunt with a lasp gasp win over Force