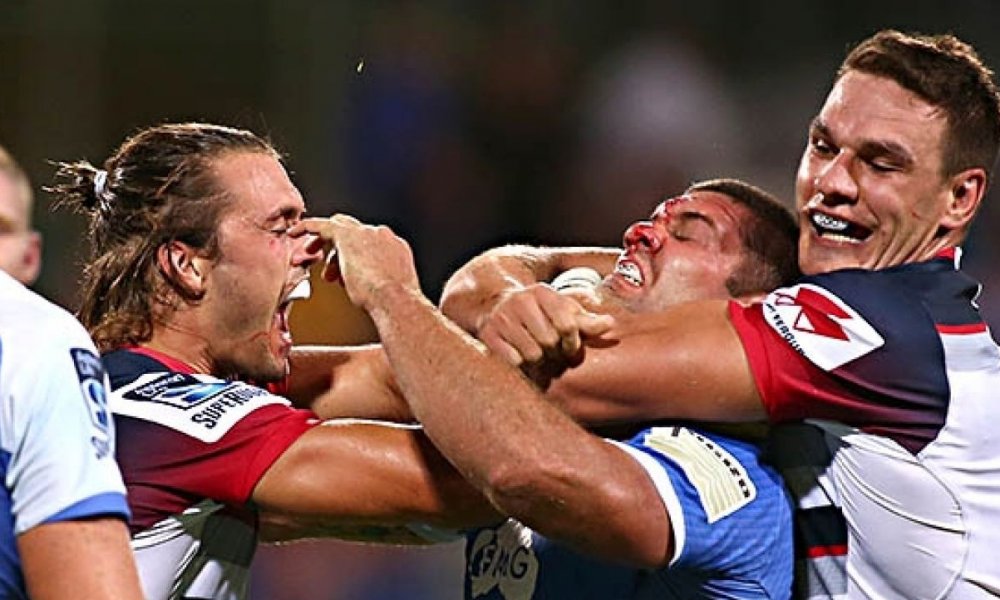 I could make a joke about the fact that nearly half the Rebels team and the Rebels coach played for the Force, but anyway.

The Melbourne Rebels won the Battle of The Growth States, winning in super time over a spirited Western Force outfit 20-25. In what was a dogged, see-sawing clash, that saw no love lost between the sides, and they could only be separated by a last gasp try at the death to the men from Melbourne.

The Force came into this game as only slight outsiders, but seemed hungry to take some revenge over Melbourne, having made it clear that the pain of 2017 when they were cut from Super Rugby was still fresh in the minds of many. Despite having not posted a win yet, the sheer enthusiasm and determination this Force side has brought to the competition since their reintroduction has seen them convert many fans to this style of domestic competition, and many were feeling that this fixture would tell a different tale.

The Rebels, meanwhile, were sitting on a win, a draw and a loss. While still under performing considering the talent at their disposal, they had shown glimpses of exciting potential, especially with their execution of a bonus point victory over the Waratahs the week before.

The Force looked to be taking the lessons in last weeks loss to the Brumbies into this game, starting the match with a lot more control and composure in both attack and defence. They took advantage in the 11th minute off the back of sloppy play by the Rebels in the ruck with a penalty, and Jono Lance wasted no time in taking the three points to give the ‘home’ side the lead, 3-0.

The Rebels discipline was all over the place as the Force pressed for dominance. Nick Frisby was making a nuisance of himself, breaching the Rebels defensive live on multiple occasions. A resultant nine penalties against the Rebels in the opening twenty-five minutes eventually saw Andrew Gardner lose patience, and he sent Isi Naisarani to the pain. The Force won a lineout, went to the maul, and tightened the screws further with a brilliant forwards try. Lance converted, and the men from the west were up 10-0.

However, just as the Force looked to be gaining the ascendancy, the Rebels struck with a move of their own off the maul just two minutes later, despite still being a man down. Toomua converted from the sideline, and the margin was back to three. The Rebels finally started to string together some phases, but when Toomua was eviscerated by a big hit from Callan, the Force tried to pounce, only to be pinged for being off their feet. Hodge stepped up to deliver one of his famous long range efforts as the half time  hooter sounded, and managed to get it in off the post.

It was a first half that had seen the Force mostly dominate, but against all the odds, the Rebels had managed to square things up.

The Rebels came out hungry, looking to take advantage of the momentum they had picked at the end of the first half, and they were further bolstered when Force skipper Jeremy Thrush was sent to the bin. They looked to capitalise down in the Force’s territory, but the Force managed to hold out for nearly ten minutes until they pinged for being offside. Deciding that gaining the lead in any capacity was best, the Rebels looked to the posts, and Toomua  kicked the goal to give the visitors the lead for the first time, 10-13.

However, just as the Rebels did to them in the first half, the Force responded in kind with one of the tries of the season, again despite being a man down. Off the back of the scrum, Frisby combined brilliantly to draw in defenders and put Jono Lance in space, before he combined with the backline to put Byron Ralston in the corner to give the men from the west back the lead. Lance then iced it with a kick  straight over the black dot and the Force were up, 17-13.

Both sides emptied their benches, and no less than four minutes after the Force try the Rebels regained the lead, taking advantage of the additional player in the forward pack when Trevor Hosea barged over under the sticks. Toomua converted and the score was 17-20.

Three minutes after that though, as Thrush returned to the fray, the Rebels were penalised for going off their feet at the ruck, and with three points on offer to tie the game, Lance took them. The Force looked to be finally showing critical dominance in these closing stages, and when the Rebels were pinged again in the 75th minute, they looked to take the points again and the lead. Lance stepped up, and incredibly, pulled it to the left. It would turn out to be a critical, 1% mistake for the Force.

The Rebels looked to have bombed a chance of their own at the death, when Reece Hodge looked to try and finish the game with another long range effort that fell just short. With the Force taking the mark, they kicked it into touch and the game was heading for Super Time. Given how close it had been up until this point, it was almost appropriate.

It would be the team taking their chances that would win the game, and off the back of winning the ball in the danger zone one minute into Super Time, the Rebels pounded the Force line. The Force piggies valiantly tried to stave off the attack, but some quick thinking from Naisarani saw him score the critical try. And that was it, game over.

So close, yet so far again for the Force. They threw everything and the kitchen sink at this Rebels outfit, and showed a lot of dominance for a decent chunk of the match. The only thing that separated them in the end were the small one percenters at critical moments of the game. It’s frankly incredible that, with solid efforts and determination they still haven’t picked up that elusive first win. They still picked up (yet another) losing bonus point for their trouble however, so when they eventual win does come, it will certainly put them back in contention come finals time. They will enjoy a bye next week before facing off in a do-or-die clash in their season against the Waratahs. It is so frustrating they can’t play in front of the vocal Sea of Blue, cause if they did that first win would likely be coming a lot sooner!

This was a valuable win for the Rebels, and a much needed momentum builder. The win sees them jump to second on the ladder, as of Saturday afternoon. Inconsistency has been a hallmark of Wessels’s era at the Rebels (despite his clear efforts to try and remedy that), so to win in that fashion will do wonders for his team’s confidence and really put them in good stead to challenge for the finals. Despite being kept out for most of the game, their ability to find a way to win was something to be admired, and will definitely be needed going forward when they face the Reds at Suncorp Stadium next week.

There were multiple game changing moments in the game, with quick tries by both the Rebels in the first half and the Force in the second. In the end, what separated them was the effort of Naisarani at the death to score the try early into Super Time.

Pfft, this is a tough one. For the Force, their backline once again impressed and the inclusion of Jono Lance has been so invaluable. However, I’m going to give it to Isi Naisarani. Even though he did spend ten in the bin, his work rate was outstanding and in the end, it was him that proved the difference between the forward packs.

Bryan Ralston continues to again, show himself as a great finisher for the Force, and Nick Frisby was also electric at scrumhalf. For the Rebels, Frank Lomani also had an impressive game, with the young Drua back really advancing in leaps and bounds in terms of his maturity and game style since coming to Melbourne.