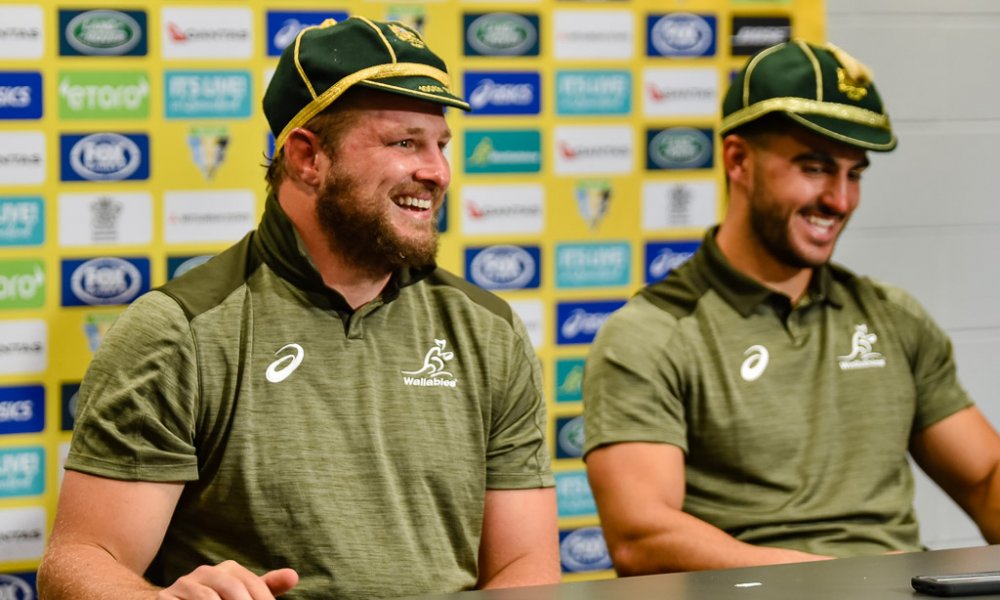 GAGR’s Nathan Williamson has given the official go-ahead for James Slipper to Captain the Wallabies for the upcoming Wales test (3:30am Queensland/correct time Sunday morning).

On Tuesday evening Rugby Australia confirmed that Slipper would step up in place of Michael Hooper, with the flanker ruled out with a foot injury.

It will mark just the second time the 32-year-old will captain the side, handed the honour against the USA ahead of the 2015 World Cup.

“It’s obviously devastating losing our skipper Hoops but the boys are very excited (for Slipper), there was a big roar when we heard Slips would be captain,” flyhalf James O’Connor said on Tuesday.

“He’s one of our leaders in the leadership group. He’s been there and done that and everyone can rely on him. He’s got a very steady presence.”

“The job is normal for him. He’s using the guys around him that would normally speak on detail and he comes in with a bit of emotion.”

The missed-by-Reds-fans Brumbies prop will likely move back to his preferred side of loosehead when the Wallabies confirm their side late Thursday with Taniela Tupou and Allan Alaalatoa expected to recover from concussions.

The Sydney Morning Herald reports that Pete Samu is favoured to take Hooper’s No.7 jersey, meaning Colby Fainga’a could be in line for a Test debut off the bench, joining brothers Anthony and Saia who have also represented the Wallabies.

The Sydney Morning Herald reports that Queensland flanker Angus Scott-Young linked up with former Waratahs coach Daryl Gibson at Bay of Plenty in July and set about testing himself in the country’s revered provincial championship, the NPC.

“It hurts (missing a Test call up). I’ve played a lot of games for the Reds and I’m a really proud Queenslander and I would love to represent my country because it’s the epitome of what you can achieve,” he told the SMH.

“That’s why I made the decision, after missing out, to be proactive, to not dwell on it. I wanted to come down there, learn what I could from the best rugby system in the world (steady-on there champ) and hopefully some day in the future that call does come.”

Scott-Young’s NZ stint had the blessing of Reds coach Brad Thorn and club University of Queensland.

Last week, Scott-Young returned to Australia with a Bay of Plenty Warrior of the Year award.

“It (the award) epitomises Angus because he plays the game tough and he’s come to a region in New Zealand that’s renowned for toughness,” Gibson said.

Meanwhile, the Reds have been attacked by police dogs as a novel training exercise in thinking under pressure. Players wore protective suits whilst the dogs attacked them.

“When we made contact with the dog squad, we spoke about what we wanted to get out of it and soon realised that our values aligned,” said defence coach Michael Todd.

“Army camp last week was all about working under pressure, they were a bit fresher this week so it was all about bringing in external stimulus, putting the guys under mental pressure with a bit of tunnel vision starting to develop and being able to do under duress.”

The following is from SA Rugbymag dot co dot za. It helps if you read it in a full Afrikaner accent:

“Not a single Springbok player has been included among the nominees for World Rugby’s 2021 Player of the Year award, who were announced on Monday.

This despite the fact that Jacques Nienaber’s team has beaten the British & Irish Lions twice to win the series 2-1, beat the All Blacks on the Gold Coast and claimed away wins over Six Nations champions Wales in Cardiff and Six Nations title-challengers Scotland in Edinburgh.

The Springboks currently top World Rugby’s official rankings, after a 15-point victory at Murrayfield and Ireland’s toppling of New Zealand in Dublin. The All Blacks, who rank second in the world, have also not had any players nominated.

It is the first time that neither South Africa nor New Zealand will be represented since the inaugural year of the award in 2001.

Rugbypass reports on some of the individual Jaapie carry-on on social media.

All nominations here. The Mens’ international “tries of the year” video can be found here.

The Guardian reports that Seppo President Joe Biden, who has said he played rugby at law school, sent the Irish team a letter saying “Go spread the faith. I’ll be cheering for you” before their momentous game in Dublin, then called the team and Irish leader after the game.

The White House confirmed to GAGR that the post-game call to the Irish team occurred, which it said Biden made with “members of his family”, and the letter written to “Team Ireland”.

In the political realm, a spokesman for the Taoiseach, Micheál Martin, told reporters Biden called him too, saying, “Well done, I’m delighted for you” and discussing his own experiences playing American football in college.

Biden’s links to and liking for rugby union are well known, not least in light of previous interactions with Ireland and New Zealand. On a visit to Auckland in 2016, as vice-president, he was given a shirt by two All Blacks forwards. On the occasion, Biden said that he “played rugby for one year when I was in law school”, as a fullback.

In Auckland five years ago, Biden mentioned following an All Black tour of Ireland in the 1970s, when he was a young Democratic senator from Delaware, during a congressional recess.

“We packed up,” he said, “and we followed them all through Ireland. There was nothing but carnage left behind. But I am a real fan.”