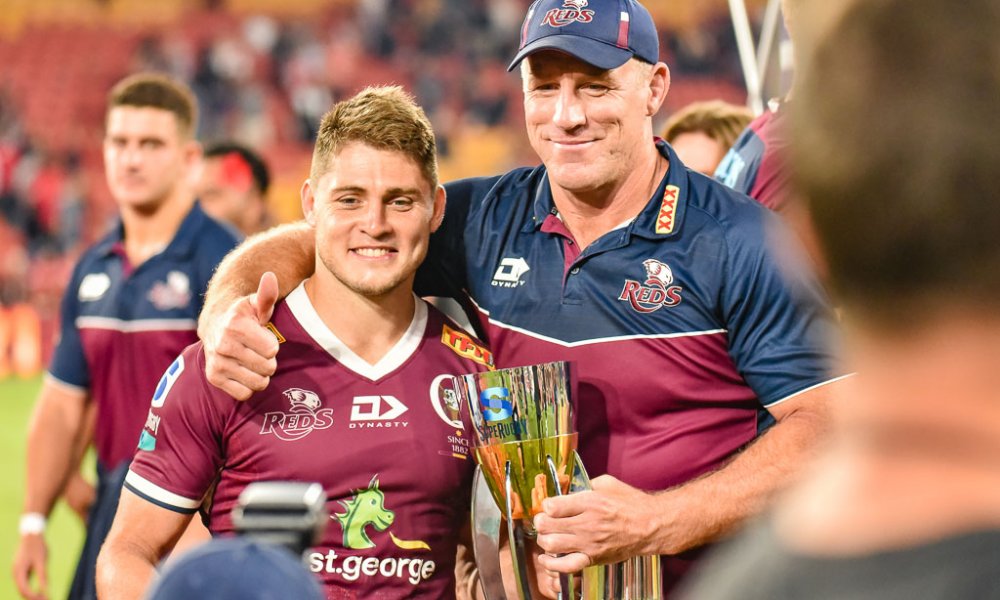 The Sydney Morning Herald reports that, in the aftermath of Queensland’s 21-7 win over the McKellar-prepared Brumbies at Suncorp Stadium on April 2, the SMH pushed hard for a definitive answer on Queenslander Brad Thorn’s national coaching ambitions…and Thorn finally relented.

“Australia is where the challenge is for me and where I’m connected to,” Thorn said, apparently putting an end to speculation that he might one day put his hand up to coach the All Blacks, for whom he played 59 Tests including the 2011 World Cup final triumph (or the SMH is reading too much into it).

“I hold the Wallabies coaching role in high esteem. It’s a privilege and a responsibility. I don’t believe you should just walk in there and get the job. You have to earn the right. Right now, I’m really enjoying my time with Queensland. We feel we have built a quality program here and that’s where our focus remains. If the opportunity presented itself at the right time later down the track, I would be honoured to coach the Wallabies, but that’s for other people to make that decision.”

Despite Thorn holding a 7-6 edge over McKellar in five years of Super Rugby games in which they have been rival coaches, it is fair to say McKellar has the edge with the people who will “make that decision”.

Said one highly placed Rugby Australia source (according to the SMH): “In the context of getting greater changes around high-performance coaching, Thorn has not been good to work with. He has not been a team player. A decision doesn’t have to be made now but he had better turn that around – and quickly.”

Try to be a bit more of an easy-going team-player next time you beat the Brumbies or win the Australian conference Thorny. Another highly-placed anonymous Rugby Australia source (according to G&GR) said “Don’t worry, when I’m not running off seven like a mad chook or turning my back when referees are trying to talk to me, I’ll organise the other Waratahs boys to white-ant the next Queensland-sourced Wallaby coach as well”.

Oh, look at that! Bloody favouritism!

The review, with 26 recommendations, was instigated after a senior Black Ferns player – Te Kura Ngata-Aerengamate – posted on social media that she had suffered a mental health breakdown following the Black Ferns’ 2021 end-of-year tour to England and France.

“What became clear during the review was that Te Kura’s concerns were not isolated and some other players (particularly Māori and Pasifika players) had either experienced similar behaviour by a number of members of management (of ‘favouritism’, ‘ghosting’, cultural insensitivities), or had witnessed it, or had been told about it contemporaneously,” the review said.

When asked why players did not complain, they cited being worried it would affect their chance of selection, they did not know how to raise a complaint, or it had been mentioned to management but nothing was done.

Ngata-Aerengamate’s post included claims that the coach, Glenn Moore, had made a number of comments to her during her eight years in the team, including: that she had been selected but “didn’t deserve to be in the team”; that he was “embarrassed” for her; and she was “picked only to play the guitar”. She also revealed feeling low self-esteem, like she was walking on egg-shells, and that she was sworn at and made to feel like everything she did was wrong. Moore has not directly addressed Ngata-Aerengamate’s claims.

The review also cited a lack of cultural diversity and women within the Black Ferns’ management structure, noting that the team itself is “an elite female team of which 50% are Māori, and 25% are Pasifika”.

Women in Rugby Aotearoa chair Traci Houpapa told RNZ she was surprised Moore was keeping his role. “It does send a message to say they are retaining the status quo… [New Zealand Rugby] needs to think about what that sends to the players and to the rugby community,” she said. “I think the report tells us in many ways what we already knew, that these are long-time long-term systemic issues that have been affecting and impacting women who want to play rugby in Aotearoa.”

Racing 92 beat Stade Francais 22-9 in a Parisian Champions Cup derby match last Saturday. According to Rugbydump, one big talking point of the game came from a red card conceded by substitute Stade hooker, Tolu Latu in the 67th minute. Latu only entered the field in the 47th minute after he replaced Laurent Panis. Latu only lasted 20 minutes, when he was red carded by referee Luke Pearse.

Racing lock Baptsite Chouzenoux leaped into the air to claim the ball and Latu took Chouzenoux’s legs out from under him, causing Chouzenoux to land on his neck.

Newsrnd reports that this is not the first “coup de brilliance” for the Australian hooker of Tongan origin (22 selections).

A recurring indiscipline which has regularly put his team in difficulty at crucial moments.

His case also agitates the Parisian club and its staff. Stade Français coach Gonzalo Quesada admitted after the match that he wants to take some responsibility by having chosen to play Latu.

In March 2021, the hooker, after drinking too much, fell asleep at the wheel of his car and hit five vehicles that were parked in the 16th arrondissement of the capital. A similar slip had already happened to him in Australia, two years earlier, when he was playing for the Waratahs (who had suspended him). On the other hand, Dave Rennie is looking for consistency from his players.

Fox reports that English fullback/winger Mike Brown has added to the scrutiny on Eddie Jones by saying he was on the receiving end of a foul-mouthed rant when the England coach left him out of his squad for the 2019 World Cup in Japan.

Brown was involved in a bust-up with Ben Te’o during an England training camp in Treviso. Jones, who by that stage had left Brown out since giving him the last of his 72 England caps in 2018, used the incident to explain why he had left both backs out if his squad. Brown said Te’o was responsible for the altercation by punching him in the face, but insisted an angry Jones was in no mood to listen to his explanations.

“That wasn’t the reason why I didn’t go to the World Cup,” according to Brown. “I think it was just easier for Eddie to put it on that, as I’d kind of been getting pushed out of the team as that season had gone on. I said to him, ‘Look, I understand selection is what it is, but don’t put it on that. You haven’t even asked me what happened. With all due respect, I didn’t really do anything. I don’t feel like it was my fault.‘ ”

The now 36-year-old Brown said Jones told him his security guards had witnessed the incident but reacted furiously when the player asked to see their written reports.

“So he just switched and turned on me, effing and blinding,” recalled Brown. “It wasn’t nice. He said, ‘Who the F do you think you are?’ because I was going back at him and he doesn’t like that.”

[The same Fox link has a following article discussing Wallaby no. 10 selection prospects.]