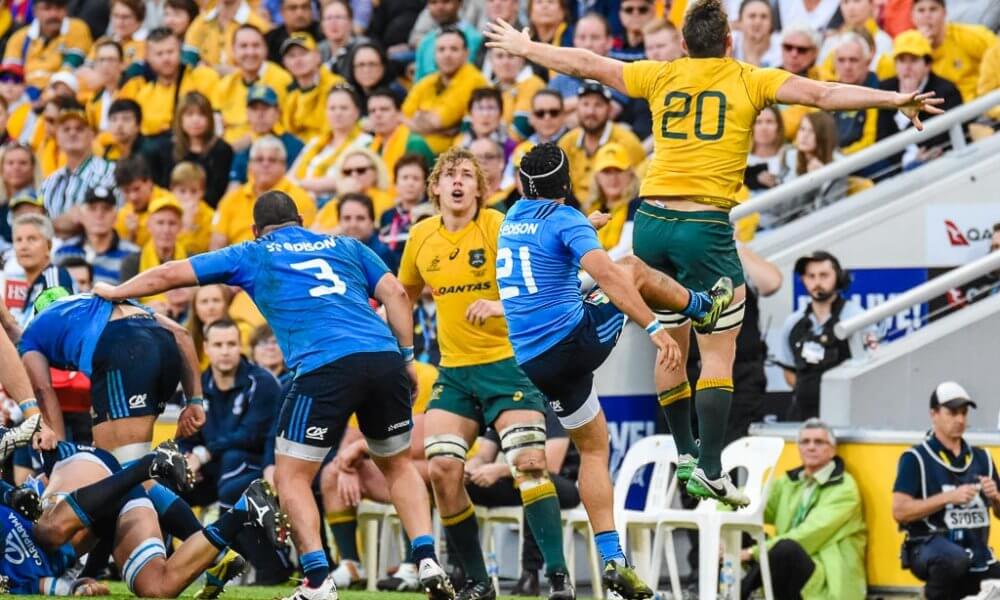 Tom Decent of the SMH reports Dave Rennie’s comments on the France game. Rennie had benched starting five-eighth Bernard Foley in the 72nd minute to bring on Reece Hodge.

Former Wallaby Drew Mitchell said during Stan Sport’s coverage the decision to hook Foley was “interesting”. “I think it was a poor substitution taking Bernard Foley off. You’ve got seven minutes to play and you take your key decision-maker off? [It is] not so much [about] Reece Hodge – I’d get him on somewhere – but at 10 was a poor decision. [Foley is] the key communicator, the driver, the steerer of the ship. Having someone who’s not a [specialist] 10 come on to play 10 in the most crucial moment of the game?”

Rennie has since commented: “No. We brought Hodgey on because we were in front. He’s a bigger defensive body and has a big boot. That was the thinking around 10.” As for substituting Michael Hooper the 71st minute: “With Hoops, he was just gassed. He looked gassed after about 50 minutes.” “There was a lot of kicking and as you know with him, when there’s kicks, he’s going full throttle. They kicked the ball 36 times. He got a second wind for a while. We wanted to get [reserve back-rower] Pete Samu on. We needed Jed [Holloway] on from a lineout perspective with Will [Skelton] on the field and defensively Bobby [Valetini] is a bigger body. That’s why we took Hoops off.”

Regarding the last Folau Fainga lineout throw ruled “not straight”: “I don’t agree with the last call. It was on the inside shoulder. It certainly wasn’t consistent with other decisions made in the game. The first one he threw short. We picked off a couple of their lineouts too. You’ve got two competitive sides going at it. It is what it is. [Lineouts] are a strong part of the game and an important part of it. It would have been good to get a little bit more territory in the second half so we could launch from up there.”

The Wallabies play Italy in Florence this weekend Saturday, 12 November at 11:00PM proper time (midnight Sunday for those on daylight saving).

According to Stuff, the Black Ferns’ dramatic 25-24 victory against France in the Rugby World Cup semi-final on Saturday night was watched by more than 1 million New Zealanders (or 120% of the home-based population).

Newshub reported on Sunday that free-to-air Three attracted an audience of 910,000 for the Black Ferns’ victory, and Spark Sport said on Monday that their streaming audience was sufficient to take the total audience above the 1 million mark. The audiences represent an enormous increase on the figure for the 2017 Rugby World Cup, and a big leap from the opening game of this year’s tournament.

World Rugby has previously revealed that “on the opening weekend in New Zealand, the Australia v New Zealand fixture attracted an average audience of 600,000. This is five times the New Zealand audience for the Rugby World Cup 2017 final”.

Tournament organisers are expecting Eden Park to be sold out for the final against England. World Rugby said in a statement on Sunday that almost 8000 tickets were bought for next weekend’s finals day after the final whistle of the second semi-final. The game’s global governing body also confirmed most of the current seating was “entirely allocated” and that it was reviewing remaining space at Eden Park to allow as many as fans possible to attend, temporarily converting the All Blacks’ Faustian Pact Satanic Chapel into more audience seating.

Meanwhile, on 10-11 November World Rugby will host a “Women in Rugby Summit” in Auckland instead of somewhere nice. The event will host more than 300 delegates representing 43 countries worldwide. Delegates include national member union and regional chairs and CEOs, government and sport partners, major brands, broadcasters and influencers.

Andy Bull of the Guardian reports that the latest conference, dominated by sceptics of recent research, will do nothing to bring clarity to the chronic traumatic encephalopathy (CTE) debate.

There were three speakers in the session on brain health. First up was the neuropathologist Dr Rudy Castellani, who is professor of pathology at Northwestern University Feinberg School of Medicine. Castellani has previously described himself as an “unabashed denier” of some of the research behind CTE. He previously served as an expert witness for the National Hockey League in a class action lawsuit alleging the league hid the dangers of concussions and long-term issues. At World Rugby’s conference he explained that, among other reservations, he believes there is insufficient evidence to describe CTE as a “neurodegenerative” disease. It is also his opinion that there are “factual inaccuracies” in the recent guidance issued by the US National Institutes of Health, which acknowledges a causal link between CTE and head trauma. Given that the NIH is the largest public funder of biomedical research in the world, it is something of a fringe position.

The next speaker, Dr Ken Quarrie, a specialist in the epidemiology of rugby injuries and chief scientist at New Zealand Rugby, is also on record talking about his scepticism about CTE, and in particular the clinical outcomes associated with it. In a recent blog he wrote, “Despite there having been strong claims made about what causes CTE, how it develops, and what clinical outcomes it leads to, the reality is that the science of CTE is very young. There really is a lot of doubt about a number of the issues!” They included whether it is really “a primary, progressive neurodegenerative disease”, the “cause(s) of the pathology”, the “prevalence of the pathology”, and “MAJOR questions remain about the relationship between having CTE pathology in the brain and any given clinical outcome”.

The third speaker, Dr Gordon Fuller is a specialist in health data science from the University of Sheffield. It critiqued the recent research published by a team at the University of Glasgow that demonstrated that former rugby players were at higher risk of neurodegenerative disease when compared to the general population. The original paper wasn’t presented, and the team behind it were not represented. Fuller’s big criticism was about the lack of data about confounding factors, mainly alcohol use, but also steroid use and post-retirement depression, among the rugby players.

At various points in the brain health sessions, explicit criticisms were made of the work done by several of the world’s leading experts in the field, none of whom were there to offer a rebuttal.

World Rugby did invite other speakers, including representatives of the Glasgow University study and the CLF, to participate in the panel event afterwards. Everyone turned them down, one on grounds that World Rugby had provided only seven days’ notice when the rest of the schedule had been published well in advance, another because they didn’t want to share a platform with one of the speakers.

Bull states that the cumulative effect was that anyone watching the session could reasonably have left with the impression that the issues were overblown, the science behind them unclear, and that World Rugby’s handling of it all is just about spot-on. That last point was, in fact, near enough one of the panel’s conclusions (many of the rest could be best summed up with the tired line: more research is needed). The conference focused on only one side of the debate, the same side, it so happens, that is most reassuring for its organisers.

To this writer’s eyes, rugby faces an existential threat from brain injuries both in terms of mounting ex-player litigation and the future direction of the sport. There seem to be no easy solutions. “Outright denial” is too implausible and “remarkably changing the product” is unacceptable to stakeholders. As such, the governing bodies seem to be defaulting to a “big tobacco” or “big fossil fuels” playbook by which additional decades of business-as-usual and a colourful argument to defend liability are “bought” by blurring the science with conflicting “experts” and taking “the best measures we could at the time with what we know at the time“, for example being seen to crack down on tackle height despite high tackles accounting for only some brain injuries in collision sports. I don’t have a solution, but I am wary of the ‘go slow’ tactics.

Sky Sports reports that Anthony Seibold will leave the England coaching setup at the end of the autumn nation series to join not only the long list of ex-assistant coaches to Eddie Jones, but NRL side “f*cken” Manly (where he has been appointed head coach).

Brett Hodgson has been appointed England Rugby Union defence coach. Hodgson had more than 200 appearances in the NRL before moving to England where he won the prestigious ‘Man of Steel’ award with Huddersfield Giants in the Super League. He moved into coaching in 2013 with Hull and Widnes Vikings. He subsequently joined Wests Tigers before returning to England as Hull head coach in 2020.

Dr Evil said: “[Hodgson] was an outstanding league player and he’s a talented, hard-working young coach who is developing. He will continue the good work that Anthony Seibold has done since he joined us. We are disappointed to lose Anthony but we are really pleased for him as a career move.”

“The players aren’t the problem. England’s playing pool is as good as anyone in the world. I could nit-pick about individuals but the fault here lies with the way they are coached and selected,” he wrote in his Daily Mail column. “Too many players are being picked out of position. Maro Itoje is not a flanker and Owen Farrell is not a centre. Those guys are t o of the best players in the world but England aren’t maximising their potential. I was Eddie’s biggest fan when he first came in but now it feels like he’s just trying to prove people wrong. He’s taking on the media, he’s taking on ex-players and it’s caught up with him.”

“Someone needs to sit down with him and say, ‘What was that all about? This is just not acceptable’. Eddie needs to start listening. It’s a huge year for English rugby. He needs to look in the mirror and eat a big slice of humble pie. It’s time to admit that he’s got a lot of things badly wrong.”