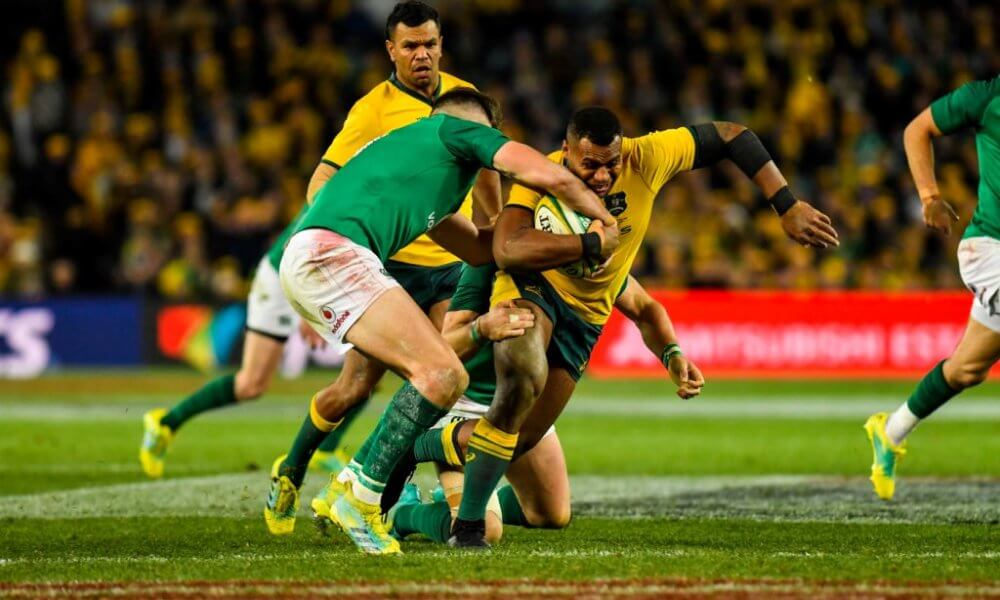 One of the biggest talking points going into the Ireland series was who the Wallabies’ centre combination would be. In the end, Cheika settled for Kurtley Beale at 12 and Samu Kerevi at 13.

Since Tim Horan’s retirement the Wallabies have predominately opted to use the ‘dual-playmaker’ system – Elton Flatley, Matt Giteau, Berrick Barnes, Christian Lealiifano, Matt Toomua and more recently Kurtley Beale are examples. These are all players capable of playing flyhalf as well as inside centre. In fact, the majority did play flyhalf for significant portions of their career.

The dual playmaker system means that there can be a playmaker behind both pods in open play and also that there is not too much reliance on the flyhalf, who inevitably will not be able to be in position for every play over the course of a match. For the style of continuous ‘running rugby’ that Cheika likes to employ. Because Cheika has opted to retain Israel Folau at fullback instead of shifting him to the wing the second playmaker must be at inside centre.

The advantage of the dual playmaker system is that it means that the attack offers a lot of creativity, and that the team can easily get the ball out wide. Theoretically, this should make it easier to get a team’s strike runners into the game. It also gives the team a second kicking option (or in the case of the Wallabies with Foley at 10, the first kicking option). While both positions are playmakers in the current system the flyhalf is expected to pass more while the 12 is allowed more freedom to run (except when the 12 has to play first receiver when the flyhalf is out of position).

There are clear disadvantages to the dual playmaker system. 12 is probably the most physically demanding backline position, with the player having to make a lot of front on tackles on players coming at them at speed. Given the size of most opposition 12s these days this puts a huge physical toll on the 12 defensively. Having a second flyhalf at 12 robs the team of a dominant defender. Second, a big hard-running inside centre gives the 10 an option to straighten the attack, get over the advantage line and set up a quick recycle when nothing is on. With a second playmaker at 12 the attack tends to get very lateral and problems can be compounded in the face of strong defence.

At the end of the series, it is time to take stock and determine how successful the partnership was, or whether a change should take place. 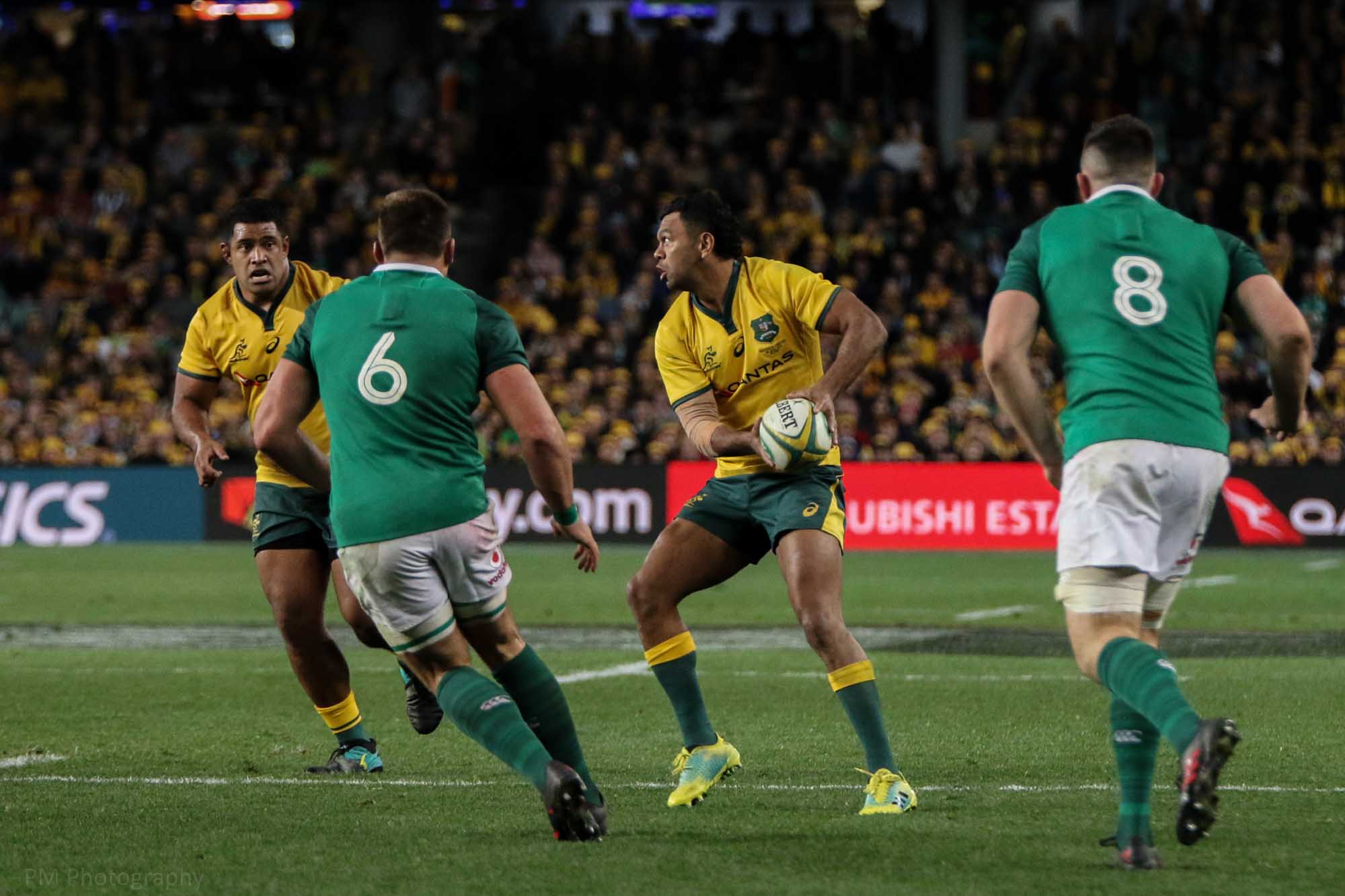 On the one hand, the Wallabies scored twice as many tries as their opponents, and only conceded three tries over three matches. Admittedly, Ireland’s attack was not the most dynamic, but it is still an impressive feat when not a single player from 10-15 is a notable defender. Clearly, Nathan Grey’s defensive systems have improved.

Furthermore, those tries Ireland did score were not the result of backs missing one-on-one tackles.

The first try conceded (taking place in the second test) was a relatively straightforward affair. With Australia down a man due to Marika Koroibte’s yellow card Ireland simply utilised the overlap created by Australia created by Koroibete’s absence.

The second was the result of Tadgh Furlong – the wrecking ball Irish prop – bursting through a half gap between Nick Phipps and Rob Simmons. Rather like Taniela Tupou, Furlong is almost impossible to stop that close to the line, and there was no shame in conceding that try.

The third try conceded in the series (taking place in the third test) was the result of a driving maul from close range. Again, not the fault of the backs.

Therefore, it can be said that the centre partnership stood up defensively. However, there are a number of concerning trends for the Wallabies in attack as a result of their centres. 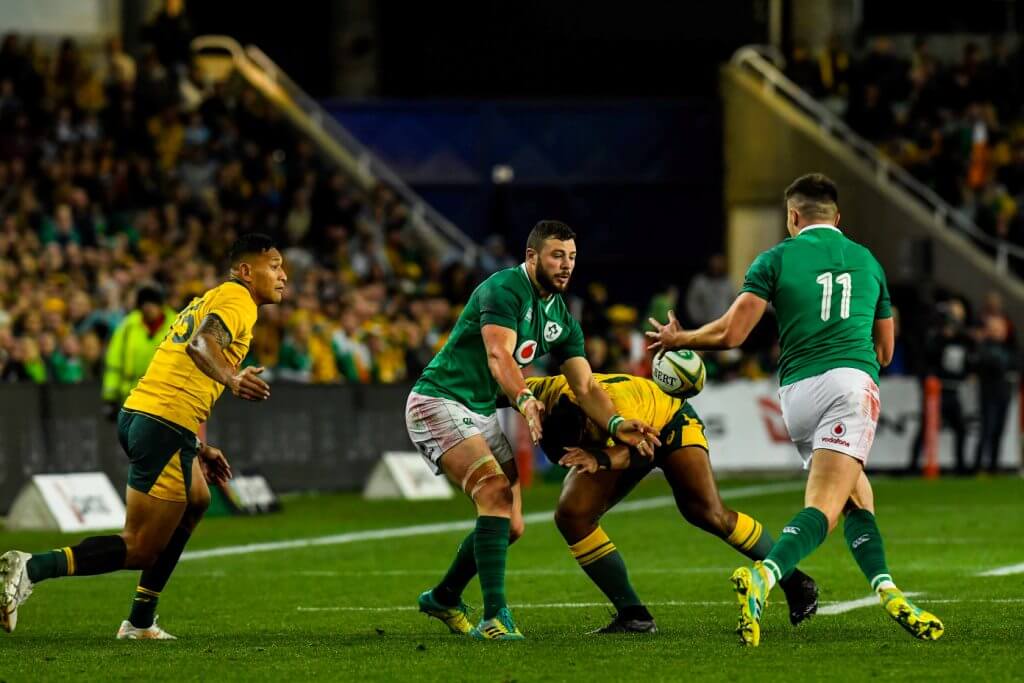 The final play of the third test was emblematic of why the Wallabies’ attack structure just did not work against the Irish with the current centres in June. With the Wallabies down 16-20 with the siren having sounded they simply needed an unconverted try to steal the series. They had surged into Ireland’s 22 and looked poised to steal the match. The Irish defence that had been so solid during the match suddenly looked tired. Forwards were consistently getting over the gain line and space was appearing out wide.

Beale receives the ball on the very left side of the HSBC advertisement. At this point the Wallabies have a four on two, with Foley, Kerevi, Samu and Haylett-Petty outside Beale facing down only two defenders. Foley is positioned a few meters behind Beale, with the other three forming another wave behind Foley. This is a perfect attacking opportunity if Beale quickly passes the ball to Foley, or cuts him out and gets the ball to Kerevi.

Instead, Beale runs sideways for 10 meters. This means that (a) the Irish defence has time to drift and get better set, (b) he takes time away from Foley and (c) perhaps most crucially it means that the outside runners Samu and DHP are not as deep, so that they have less ability to run onto the ball at speed.

Luckily, the play still appears to be on when Foley receives the ball. One of the defenders is marking Foley, while the other is between Kerevi and Samu. A third defender has had time to drift across and is desperately trying to make his way across the field to be able to pull off a covering tackle if necessary.

At this point Foley needs to pass the ball quickly to Kerevi who is in a gap between the two defenders. Kerevi’s power will force at least one, if not both, of the defenders in the front-line to attempt to tackle him. From here, it would be relatively simple for him to pass the ball to Samu or Haylett-Petty who would either have a clear run to the line, or a two on one.

Instead, Foley compounds the problem by catching the ball, running diagonally forward into contact until his three outside men in line with him rather than behind him. At this point, submitting to the tackle and setting up for another quick phase attack was the best option.

Instead, he throws a speculative pass to no one that goes into touch.

At this point both Samu and Haylett-Petty were unmarked and with a clear run to the line. If either Beale or Foley had shown better decision-making abilities the match would almost certainly have been won by the Wallabies.

The sequence was particularly painful given it cost the series, but was representative of larger problems the Wallabies faced.

With the current system, our first and second receiver often both prefer to run the ball sideways probing for gaps as opposed to either straightening the attack or even immediately distributing. As a result, the attack gets far too lateral, giving the defence time to set.

I believe Beale and Kerevi can form an effective partnership, but something needs to change in tactics or/and selection.

With the current system Kerevi is being used in the way that Kuridrani was often used – he has the ball shovelled on to him in order to straighten the attack when Foley and Beale are under pressure. That is, when he is not positioned on the wing on attack. This is a waste of his talents. Kerevi is not a crash ball player, although he can perform the role when required, but it is a waste of his talents.. He should not primarily be given the ball on the advantage line – he is skilled, possesses soft hands, a deft offload and a good boot (he delivered the Wallabies’ best clearance during the match from the 22 to near halfway). He should be given the ball a few meters behind the advantage line giving him time to draw and pass or to beat the defenders with his feet.

While Foley and Beale both have good running games, they are nowhere near as potent as Kerevi is. Foley and Beale must be coached into running straight and distributing to him as a first priority as opposed to a last resort to believe pressure. Michael Cheika must threaten to hook one of them if they fail to implement the game-plan and to shift Kerevi in one into 12.

Second, Foley must start playing first receiver every time he is in position. If he is not going to play as first receiver on attack then he adds little to the team. It is far easier for Beale and Kerevi to function in the centres if they know their role. Beale is currently oscillating between playing as a flyhalf and an inside centre and it seems to be negatively affecting his judgment.

If this is not adopted then a change in selection will be required. Either Foley or Beale will have to be dropped and Samu moved in one position to 12, with a hard-running outside centre outside of him, or Kerevi will have to be dropped to the bench and a crash-ball outside centre like Kuridrani restored to outside centre. While Kuridrani is far more limited he is the best option for purely straightening the attack, and is the best defensive centre in Australia, which will be more useful against the All Blacks than Kerevi’s more skilful game if Foley/Beale continue drifting so far sideways.

If the current lateral attacking system is employed against the All Blacks you can be sure the time will score few tries and will be burned on the counter.