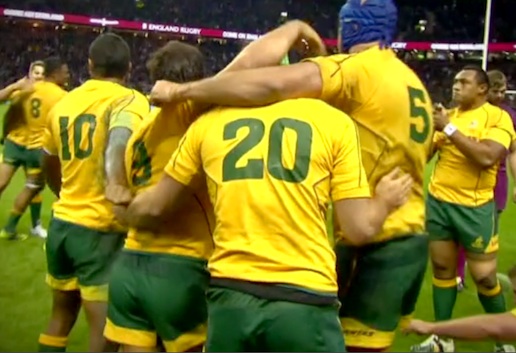 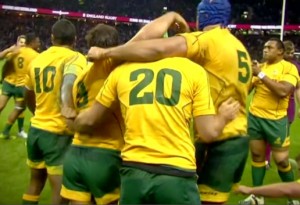 The Wallabies played good rugby last night against England. By good, I mean to an acceptable international standard and including comprehensive, skillful attack, solid defence and intelligence to know the correct tactic to deploy.

I refuse to get carried away with the Wallabies’ performance, despite it being a massive improvement when compared to the France game.

This is the first game for almost a year that the Wallabies have represented their country on the international stage and the code of rugby union in Australia with a complete performance. In that period, injuries, inexplicable selections, coaching tactics and player execution have robbed Wallabies supporters of anything remotely approaching a value-for-money experience!

The attack was multi-dimensional. Sharpe led with numerous straight runs in traffic. TPN and Moore did the same one or two passes out. Hooper ran into holes that give his speed a chance to make a difference. Palu made 16 runs for 56 metres. Timani was very effective out wide. Ioane ran straight as did AAC. Cummins’s eight runs often turned half-breaks into metres and on one occasion, his first Test try.

Beale got good passes from Phipps and chose the right depth and passing options to release the backline.

In summary, the attack was good. Yes, there is still too much kicking. But today, for the most part, the low percentage kicks, and in particular the chip and grubber kicks, often found space and were regathered by one of the Wallabies following the kick through.

When the tide of possession turned in England’s favour, the Wallabies’ defence was strong in the hit, well marshalled and reliable. The Wallabies’ breakdown contesting was excellent, but not error-free. Hooper and Palu led the way.

Statistically, the game was even. The telling statistics were that the Wallabies edged the line breaks 4 to 1 and missed fewer tackles — 10 to England’s 18. Possession evened out to 51% to 49% to England.

As for the television coverage, it often lacked the replay of interesting plays. Money is tight in free-to-air TV these days! Commentator Stu Barnes, a clever if unfit England fly-half, is clearly still carrying the scars of some maulings by the Wallabies in days gone by. His commentary exuded excessive and misplaced respect for the Wallabies that would have been more accurate and appropriate in previous eras.

England were their own worst enemies. They failed at the breakdown. They could not play at the Wallabies’ pace in the first half. Their scrum was as mortal and impotent as I have seen it in in 40 years. The likes of Moore, Ackford, Dooley, Chilcott and Beaumont would be embarrassed.

To the victor goes the spoils. Had England taken the points on offer from penalties, it could have or even should have been a different result. They didn’t. Cummins’s try was from a forward pass. The Wallabies won the game, protected their world ranking and live to fight another day. The rub of the green is the nature of sport, despite the technology now available.

This is not a victory to take to the bank. It needs to be reinvested back into the team. It does put the Wallabies back on track, but only until next week. Any relaxation or lack of intensity against the Italians could spell a disaster that Robbie Deans and his assistants may not survive.

In summary, the Wallabies put in a good performance in both attack and defence. England handed them victory by not taking the points when on offer.

Former non tackling fullback for Randwick, Uni of NSW and Roslyn Park, I am now a passionate rugby supporter and writer of more than 200 articles, principally on Rugby. Follow LeftArmSpinner on Twitter: @leftarmspinner or on Facebook: http://www.Facebook/leftarmspinner

REVIEW: England v. Australia – Wallabies Pump Poms to Put Parisian Pasting in Past
Dwyer’s View: A Week Is a Long Time if You’re a Wallabies Supporter