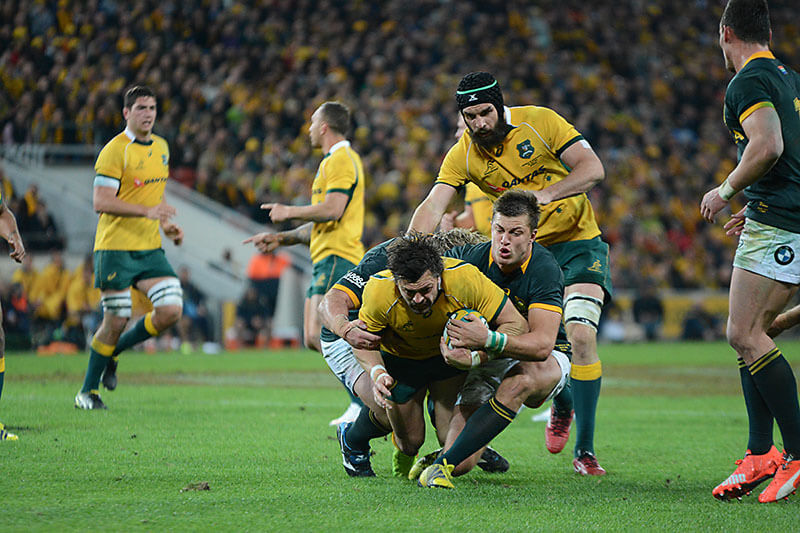 A lot has happened since the Wallabies last played at Suncorp, and it all pales into insignificance in the looming shadow of the World Cup where we have to make it out of the pool of death.  What would fans see tonight?  Could Giteau and Mitchell slot back in?  Cheika surprised me several times in the lead up to this match by naming Moore over Hooper as captain, and by naming Genia and Cooper over Phipps and Foley.  As matches to start the international season go, it looked to be a good one with Burger returning and Kriel making his deserved debut.  Game on South Africa. 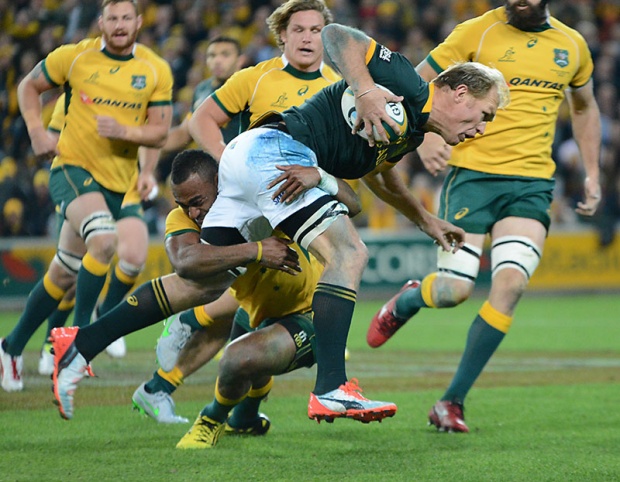 The opening minutes were an exchange of kicks and turnovers as both teams settled into the match.  It was the Springboks with the first chance at points, but Handre Pollard missed his first chance off a penalty against Will Skelton.  The Wallabies built some solid phases with fast ball and threatened the Boks line, but Skelton lost the ball and we found ourselves inside our own half.  Loose play from the forwards meant errors like turnovers and knock-ons were racking up and the clock hadn’t reached 10 minutes.

The Boks, with the little ball they saw early on, moved quickly and Jesse Kriel made a brilliant break that had the Wallabies scrambling to defend our line.  The Boks were moving a lot faster than the Wallabies around the set pieces and Matfield took a fast lineout that led to Pollard’s second attempt at goal, this one successful.  The Wallabies had trouble building phases and it was frustrating to watch chances squandered as the Boks put pressure on our attach.  And not even chances at tries – just chances to advance the line into the Boks half.  Schalk Burger in particular was everywhere, being a general nuisance and not letting the Wallabies build anything – tackling hard and forcing turnovers and generating penalties.

The Wallabies scrum was put under a lot of pressure by the Boks (even missing Matfield) and was monstered quite convincingly, and the resultant penalty went against us with Pollard slotting another 3 points.

A couple of errors by the Boks, including the ball coming off the side of Wille Le Roux’s boot, meant that the Wallabies could smell the try line.  A beautiful set piece try was scored by Adam Ashley-Cooper after a fast and smooth inside pass from Quade Cooper off the back of our lineout win.  Cooper converted and the Wallabies were ahead for the first time in the match 7-6.  For all the possession the Wallabies had  in the first half I would have expected a greater points difference, but with the Boks not giving away penalties in range and the Wallabies throwing loose passes, it wasn’t to be.

The Boks crossed only minutes later as Folau knocked the ball straight into the  waiting arms of  Bryan Habana who set up Eben Etzebeth to score his first test try.  Pollard’s kick put the Boks ahead 7-13.  It wasn’t over yet – Wallaby fans had their hearts in their mouths as 2 minutes after the halftime siren had sounded the Boks were again camped on the Australian’s try line and they came extremely close to being up by 7-20 as they headed to the sheds.  This really was representative of the first half – the Boks had little possession but managed to grab the ball at the breakdown and threaten very quickly – the Australians weren’t being quick enough at the breakdown and were struggling to dish out the same punishment.

The second half started with Jesse Kriel scoring a brilliant try on debut – quick ball from Le Roux to Habana to Kriel meant he put his foot down and crossed for a great try and the score was 7-20.  The Wallabies had no one to blame but themselves here as they misread the play (Higgers) and missed some key tackles (Slipper).  Cheika used his bench early (starting at 46″), replacing Higginbotham with Pocock and Kepu with Greg Holmes.   As a Reds fan, that is an awesome story – 2849 days since Holmes last wore the green and gold.  After a good personal season in a shocking team season, it is a well deserved cap.

With the addition of Holmes and the wholesale replacement of the Boks front row, the Wallabies were able to dominate in the scrums, but if I were Cheika I would be concerned about this heading into the World Cup with matches against England and Wales – we should be nailing the set piece.

Australia’s second try came off the back of some very solid scrum work as we were awarded the fee.  Passes from Phipps to Folau, back to Phipps and onto Hooper saw us close the gap with a successful conversion to 3 points with 5 minutes to go.  The Wallabies were absolutely in it to win from here.

The final play of the night was the game changer – literally – behind to in front; losing to winning.

Less than a minute to go.  Giteau back on.  The crowd is on their feet screaming for the kick to touch.  Moore points to the corner and Giteau punts it.  The Wallabies win the lineout and the phases build.  We are now in injury time as the ball goes from one side of the field to the other.  Toomua attempts a break, Phipps passes to Kuridrani who twists and turns to cross the line or does he?

Owens sends the decision upstairs and the crowd agonises with every replay.  Decision back = TRY!

It was a win, and I will take it.  There were some exciting elements, but with close to 65% of possession the Wallabies shouldn’t have won after the siren.

For my mind, Horwill absolutely outpointed Skelton when he came on – running hard at the line and making good breaks, while holding on to the pill.  Skelton, for all his bulk, didn’t make it through the Boks defensive line and didn’t add anything to our scrums either.  Genia didn’t come back after halftime, but Phipps was fast, aggressive and dogged – I would absolutely have Phipps start over Genia.  Genia’s passing off the deck is a little slow and he didn’t have the niggle that Phipps did.

Cooper didn’t have a particularly strong match, but it wasn’t nearly as bad as it looked first time round, so I can’t rule him out conclusively.  Toomua was a joy to watch when he came back on, tackling hard and running hard, being in the right place at the right time.  Looking at him make the most of his time on the field it was absolutely an audition to start.  That said, still not sure he should start – he is a very handy injection off the bench.  Maybe 10 & 12?

Folau was supreme under the high ball.  Yes, there were a few lost as he returned to ground, but he challenged every time and made it look easy, ensuring we retained or secured the ball AND made ground.  And I can smell my roasting flesh from the NSW fans, but I would start Pocock over Hooper – we were swamped at the breakdown and really didn’t challenge the Boks to steal back possession.

The TMO review that awarded the try to Tevita Kuridrani.  Massive Wallabies supporter, love that we won, still not entirely sure it was grounded.   Aren’t you all pleased I am not the TMO?!

Kuridrani for the contortionist act after the siren.

Less to do with players and more to do with a goal kicker, my kingdom for a goal kicker.  Ye gods!  I know both the Boks and the Wallabies missed kicks tonight, but at this level with the World Cup less than 2 months away, you just can’t miss.