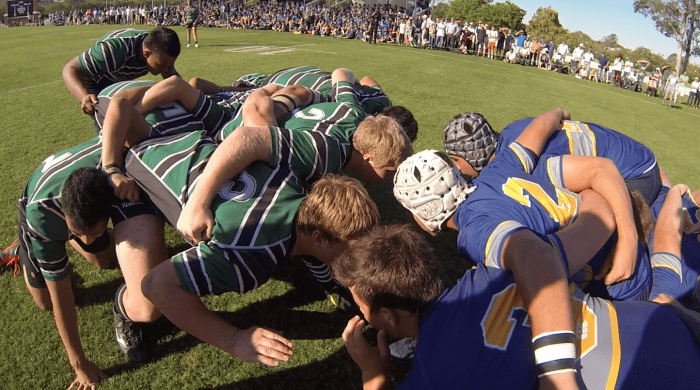 GPS Rugby kicks off in Brisbane this weekend.

Our old mate from the forum, warrenwobble, casts his unique yet scarily accurate eye over things as part of his Brisbane GPS Rugby Preview for Round 1.

The light blue dark blue will make the trip down the M1 with high hopes of staying within 30 points of TSS.  It’s a fair enough aim given the absolute pastings they endured last year. The beach boys will have other ideas, as they usually start quicker than a Bali tourist heading to the airport before an ash cloud.   The best mums in the business will be on the sidelines, but bikinis will be replaced with beanies as the arctic vortex moves across the canals and blows one of the goal posts over before kick off.  The grammar lads will quickly and studiously put the posts back up while the Southport team just sit in the grand stand. This will sap any energy the Grammar lads bought with them and TSS will run right over the top of them, when they can be bothered to start playing.

The T-ba boys will come down tonight to prep themselves for the game and to acclimatize to Sea Level conditions. Teams unlucky enough to play on the flats will in fact be playing below sea level, so TGS teams will struggle down there. The firsts however, should be fine. They booked the local Hungry Jacks out after seeing it listed on Air BnB.  So they’ll be fatter than Oprah after Thanksgiving. The greasy carbo loading will do wonders for their scrum too and they’ll wheel Nudgee around Ross Oval all afternoon. It won’t be enough though as the mountain men will fall just short of the bingo butchers. The T-ba lads will make the most of the trip and spend the rest of the weekend sunning themselves on the mud flats at Nudgee beach.

Ah the hallowed fields of Toowong beckon. IGS are still having nightmares about the 70 point flogging the kilt wearers handed out in the last game of last season. So much so half the Ippy team will stop at the Goodna RSL on the way down to drown their sorrows with a couple of Woodstocks and a game of Keno.  This won’t be good for over all performance and using Gatordade as a mixer won’t help either. After a surprisingly good start from Ippy and a quick biff between their own front row, a couple of Ippy boys will bring their counter meals up on the middle of Miskin and BBC will pile on the points as their back three make swiss cheese of the Ippy D. Ensuring the BBC parents will be suitably annoying next week when they play TSS.

Easily the closest match up of the round in terms of the game and the supporters. In fact if no one wears a scarf or a stupid supporters hat you won’t be able tell who is going for who. It won’t be till you go out to the car park that you can spot the difference. People movers double parked all over the streets of East Brisbane and Range Rovers valet parked right near the swimming pool and the foot massage tent. They know how to do it at Churchie!
On the field this will be close. The Red and Black will look like fat kids in a vat of smarties – they’ll be all over the Churchie boys in the first 10 minutes. In fact for a while it will look like the Terrace boys might open their account with a win. In the second half Churchie will bring on Quade Cooper (he’s going to do Grade 11 for the third time), and be too strong in the end. It will be a good warm up for Quade as he’ll then go to Suncorp Stadium and play the house down as the Wallabies roll the Bokkas.